By Lizann Lightfoot There is a date tattooed on my husband’s arm, a date we once again reached last week.... 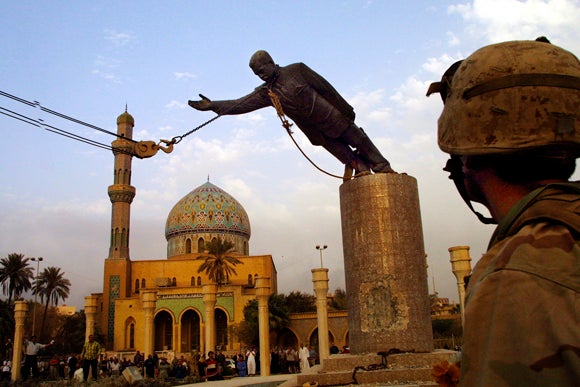 There is a date tattooed on my husband’s arm, a date we once again reached last week. It isn’t our anniversary or any of our children’s birthdays. Instead, it is a day he will never forget–when one of his best friends was killed in Iraq.

This week marks the 14th anniversary of the fall of Baghdad. On April 9, 2003, American troops reached central Baghdad and liberated the city from Saddam Hussein’s rule. Millions of Americans watched the news footage of Saddam Hussein’s statue being toppled from its pedestal in a square in central Baghdad. My husband and his unit were there at the square, celebrating a mission accomplished.

The capture of Baghdad in 2003

It was less than three weeks after American troops had first crossed over the Iraq border. They advanced quickly, with few casualties. They advanced so quickly, in fact, that my husband’s unit outran their supply team and didn’t get resupplied with food for days. He recalls the Marines spending days in their armored vehicles, having arm wrestling matches over the remaining packets of peanut butter from their MREs. They spent weeks living in chemical hazard suits, in case Hussein released the deadly sarin gas he was rumored to have (the same gas that was recently used to kill many civilians in Syria). The troops couldn’t remove their suits even for a moment, so they slept in them and washed themselves with baby wipes. When they finally reached Baghdad and cleared the city, everyone celebrated. Newspapers and TV channels compared the toppling of Hussein’s statue to the fall of the Berlin Wall. They proclaimed a new era of liberation for the people of Iraq.

In 2003, people expected that helping the country of Iraq to recover would take some time. We didn’t realize how long it would take. We didn’t know that my husband’s unit would be deployed there two more times within the next few years. We didn’t think the fighting against ISIS would become so brutal and that he would lose so many close friends. And worst of all, we didn’t expect that we would spend the next 14 years watching towns in Iraq fall into the hands of terrorists, be secured by the Iraqi Army, and then fall again. The town where my husband fought for months, earned his Purple Heart, and lost several friends is still unstable today.

My husband and other Operation Iraqi Freedom (OIF) veterans will forever be changed by their experiences in Iraq. They will never forget the friends and brothers in arms who gave their lives there. They each choose to remember and celebrate a life in a different way. My husband has his tattoo so he will never forget. Some service members stay in touch with surviving family members and make an effort to connect with them on a death anniversary. Veterans will dig out their old photos and share them on Facebook, tagging their surviving friends from OIF. Others write short tributes to their friends who were killed, promising that they will always remember them and try to live in a way worthy of the sacrifice. And finally, it is customary to have a drink in the fallen hero’s honor–their favorite, not yours. For some veterans, the death anniversary is the only day they will drink that particular brand, out of respect.

Considering the cost of 14 years of war

As we look back at 14 years of war in the Middle East–a war that has defined my generation–I have mixed feelings. We will never be able to say that all the death, the injuries, the PTSD, and the suicides were “worth it.”

Nevertheless, I remain faithful and supportive of the mission. If all the casualties of war were necessary to topple a dictator and free his people from oppression, then those ugly sacrifices were necessary. If war is what it takes to fight terrorists on foreign soil rather than our own, then I support it. If we have to go through it all again for another dictator in another country for another 14 years, then my family will continue to serve.

I don’t want to see my husband bear the weight of more death and suffering. I would hate to see him get any more tattoos to commemorate more friends being lost. But I know he is willing to. He is trained and prepared to do whatever is necessary to defend our country. And that is what makes our military service members amazing.