This is an opinion piece that does not necessarily reflect the views of MilitaryOneClick. I hear it all the time... 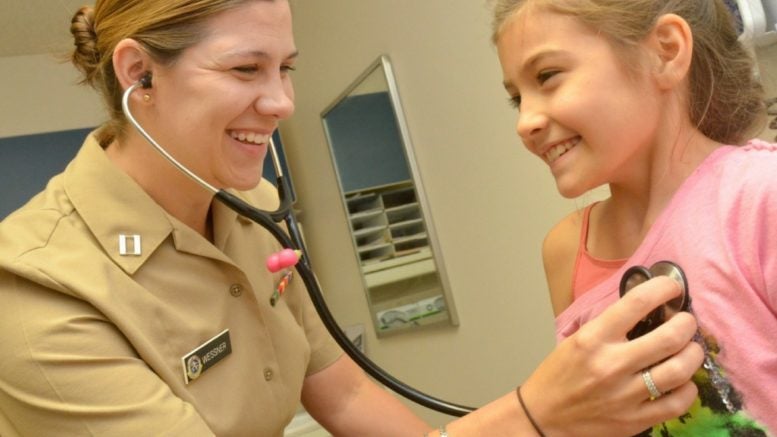 I hear it all the time and I see the articles on a regular basis. The conclusion of the opinion pieces, blogs and comments are the all the same: Military healthcare is an abomination. In the wake of the latest circumstance at Jacksonville Naval Hospital, where two Navy Corpsman mistreated infants at the hospital, I can see why so many jump on the bandwagon and are inclined to agree. But, I want to offer insight from a different point of view.

As military medical spouses, we are privy to the Facebook comments and the constant complaints about how poor the quality of care is at treatment facilities. Trying to raise children and support my husband, I can’t comment on all of them — it would be like shouting into the wind.

I do, however, have insight into both sides of medical care; we were in the Tricare Remote program for ten years.

It’s important to understand some falsehoods around military healthcare. Here’s my view.

We frequently hear military healthcare professionals have less training than civilian counterparts. This is false. I think this is the biggest comment that the medical community would like to put to rest once and for all. The ten years I was in the Tricare Remote program were during the years of education and residency my husband did in a civilian program. Military hospitals have a good mixture of healthcare providers that have been trained both in and out of the military. The doctors that are trained at military hospitals frequently do rotations for months at a time at civilian hospitals. This allows for very well-rounded training that produces skilled and educated providers.

Military docs are not in this for the money, as they often make half of their civilian counterparts. They have both the call to practice medicine and change lives, in addition to the desire to work alongside and serve our nation’s finest and their family members. Make no mistake, this is a calling.

Of course, I have personally experienced issues while seeking treatment in a military healthcare facility. Last year, I was sick for several weeks. I was seen at a military treatment facility and told I had a urinary tract infection. I insisted to be seen by someone else a few days later, and at that point, learned I had mono. Now, to be fair, the initial doctor I saw was a civilian provider. So, I think it is good to understand that several of the doctors at MTFs are contractors, and you would encounter them in all types of hospitals or clinics.

Frustrations are not exclusive to my experiences in MTFs — I’ve had just as many on the civilian side. I’ve had botched epidurals, a cesarean section that didn’t heal for two months, a child contract MRSA after ear tubes … and the list goes on. They all happened at civilian hospitals. But would I say, because of all these issues, civilian health care is deplorable? No, I would say that everything regarding medicine involves risks. It is called practicing medicine for a reason. I can understand if you feel like you have less than ideal care in the military. I have been there. You are your best advocate. If you don’t like your primary care doctor, research the avenues to make a change.

In the end, I feel compelled to be a voice to the often loathed military healthcare provider. I assure you, they are just as frustrated at times by the constraints they must follow. They want to provide the best and most efficient care to their patients, and have extra hoops to jump through because of the system. In the end, they would do it again in a heartbeat. They didn’t choose this career for the money they could make, but rather serving a country they love very dearly. They feel they provide care for and serve the best patients anyone can imagine. This wasn’t the last place they could get hired, it was the only place they wanted to be.