Air Force Maj. Kendall Dunn tightened his grip on the control wheel of the turbo-prop airplane as he thrusted the... 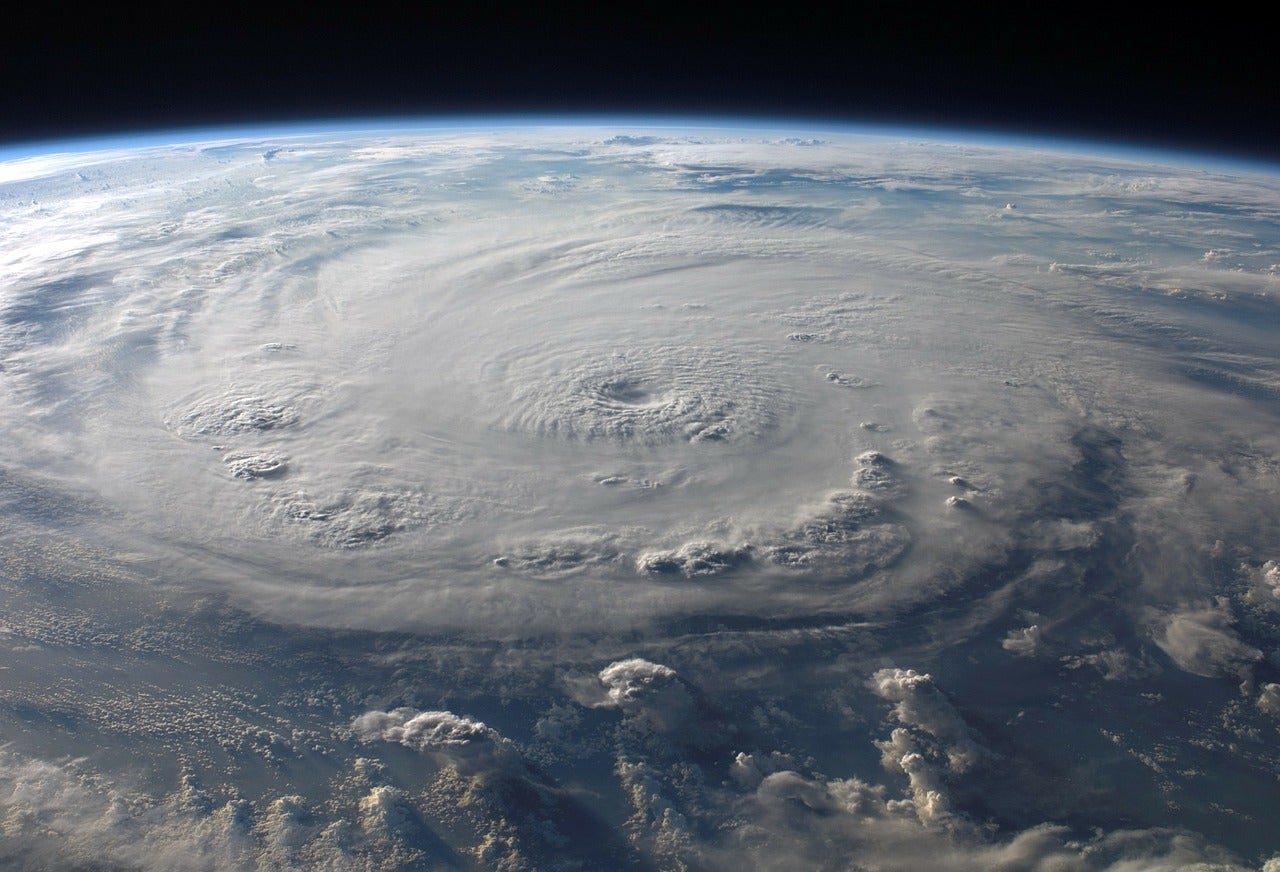 Air Force Maj. Kendall Dunn tightened his grip on the control wheel of the turbo-prop airplane as he thrusted the bulky aircraft through then-Category 4 Hurricane Irma.

At nearly 300 mph, Dunn was piloting a WC-130J Super Hercules early Sunday morning on a direct path toward the storm’s eye.

A radar screen just to his left showed the plane cutting into dangerous storm bands represented by yellow and red clouds. The plane shook, dropped suddenly, and then, just as quickly, the flight became smoothed as the specially outfitted weather reconnaissance aircraft known as a Hurricane Hunter burst through Irma’s eye wall.

Dunn, a veteran pilot who has flown with the Air Force Reserve’s 53rd Weather Reconnaissance Squadron for six years, expected more turbulence Sunday morning. Just two days earlier, he flew into Irma — the most powerful storm ever recorded in the Atlantic Ocean — on a mission he said was among the more violent he had experienced. But every flight, even into the same storm, is different.

“Every single time,” he said on the way back to Keesler Air Force Base in Biloxi, Mississippi, at the end of the 10-hour flight. “I was totally expecting to fly into this storm and get kicked around today just because of what I did a couple days ago. Rough. Come in here today and it’s almost a non-event, you know. We had some moments, but nothing was too bad today.”

Stars and Stripes was on board Sunday as Dunn and the Hurricane Hunters flew what was expected to be among their last flights into Hurricane Irma’s eye to collect vital, real-time storm data for the National Hurricane Center just before the massive storm made landfall on Florida’s coast.

The relative calm inside the aircraft — where a team of nine crew and researchers worked near constantly to monitor and relay information to federal authorities — seemed at odds with Irma’s true nature, as the storm slammed into the Florida Keys about 10,000 feet below and moved over the state’s mainland.

The National Hurricane Center, acting largely on data collected during the flight that took the crew through Irma’s eye five times, downgraded the storm throughout Sunday. By 8 a.m. local time Monday, it had downgraded Irma to a tropical storm but warned it was still producing near-hurricane strength wind gusts as it caused flooding across the majority of the state and produced wide-spread power outages and damage.

The 53rd Weather Reconnaissance Squadron is the U.S. military’s only unit charged with flying aircraft into dangerous storms. The unit, based at Keesler, has 10 Super Hercules outfitted with special sensory equipment to measure storm data as they fly through it.

It is a dangerous charge. But it is critical, Dunn said.

“People absolutely rely on this data — the people that make these key decisions that are going to save lives from a storm like this,” he said. “It’s vital. So, we’re getting them that information about what the hurricane is doing that there’s not really any other way to get it.”

Key information about the storm is collected by sensors on the plane and by small probes — called dropsondes — released from the WC-130J’s fuselage, which gather critical information about wind speed and direction, barometric pressure, temperature and humidity. In less than two seconds, sensors on the probes feed information back to the plane, where it is analyzed and sent by satellite to the National Hurricane Center, said Tech. Sgt. Karen Moore, a loadmaster on the Hurricane Hunter crew who is responsible for releasing the probes and entering the data that they collect.

At critical locations within Irma, Moore loaded the probes into a tube and released the sensors with a plane-shaking thud as the portal opened to send them into the storm below.

On Sunday’s flight, Moore was tasked with double duty — gathering the data via the dropsondes while also releasing specialized buoys, called Airborne/Air Expendable Bathythermographs, or AXBTs, provided by the Navy to collect information about the water fueling the storm.

Like the dropsondes, the AXBTs almost instantly fed information back to the plane to be analyzed by two U.S. Naval Academy midshipmen embedded with the Hurricane Hunters as part of a special assignment.

Rachel Boushon and Casey Densmore, Naval Academy senior oceanography students, received data from the buoys, including the water’s temperature and depth. That information helps the National Hurricane Center project the future strength and direction of the storm, Densmore said.

The 21-year-old who aims to go into Naval aviation after he is commissioned in May said his time during the last two months with the Hurricane Hunters has been eye-opening.

“What these guys do is amazing,” he said. “You think it is maybe a little crazy. But it’s incredible to see the commitment they have.”

Military hurricane hunting was built off a barroom dare in 1943 between two risk-seeking Army pilots, according to unit lore. On July 27 of that year, Maj. Joe Duckworth flew a single-engine AT-6 Texan fighter trainer from Bryan, Texas into a hurricane in the Gulf of Mexico, twice entering the eye of the storm, according to the 53rd Weather Reconnaissance Squadron’s official history. The next year, the unit was activated to track weather in the Atlantic Ocean during World War II.

Everyone flying with the 53rd has their own reason to be there.

Moore, the loadmaster, admitted she is a bit of an adrenaline junkie. A Marine Corps veteran from Atlanta who changed jobs to fly with the Hurricane Hunters said people told her she was crazy.

“They’re like ‘There’s something wrong with you’,” she said. “But it’s fun. It’s the best job in the military. You never really know exactly what’s going to happen.”

Dunn said he did not seek out the opportunity to fly into hurricanes. He just wanted to fly C-130s and the Hurricane Hunters had an opening.

The married, father of two said his family gets nervous when he is tasked with a hurricane flight. He admitted to getting “the butterflies” himself before those missions.

On Sunday, as he guided the plane through Irma, the pilot recalled his very first flight into a tropical storm after joining the unit. Within 30 seconds of taking the controls, the aircraft began to convulse, at one point nearly rolling over.

“The thing was rocking and rolling, and I saw the other pilot was working his butt off. I realized it was pretty serious,” Dunn said. “We finally recovered the plane, but we were like ‘What was that?’”

It was a tornado.

The radar had missed the cyclone, and Dunn and his co-pilot flew directly into it. It was the scariest moment he ever had in the pilot seat, he said.

“Never had anything like that again. It was just an anomaly,” Dunn said. “What a welcome to the job.”

Despite the occasional close call like that, the unit has an exceptional safety record. The Air Force has not lost a Hurricane Hunter aircraft to a storm since 1974.

“The pilots are top-of-the-line, you trust them with everything,” Moore said. “Everyone here has to trust each other. It’s a full team effort, and everyone has a critical, serious job to do.”

Once a hurricane makes its final landfall, the Hurricane Hunters’ jobs are over. They don’t fly into the storm over land.

As Irma’s eye moved northwest up the Florida coast Sunday and the storm sent tropical-strength winds across virtually the entire state and into southern Georgia and Alabama on Monday, a massive military response was being prepared to respond to devastation on the ground.

Thousands of National Guard, reserve and active-duty troops were pre-staging in Georgia and areas of Florida to respond as quickly as possible once the storm moved through the region, defense officials said.

About 7,000 Florida National Guard troops were called last week to duty, state officials said. U.S. Northern Command pre-set another 4,500 servicemembers throughout the southeast to respond and the National Guard Bureau has another 30,000 troops on alert should they be requested to help.

Army supply convoys totaling about 100 vehicles and 350 active-duty soldiers were moving in stages toward Orlando by Monday morning, according to the service.

The Navy had positioned seven warships in the region to respond, if they are needed.

Meanwhile, the Hurricane Hunters will be keeping tabs on Hurricane Jose, a Category 2 storm near the Caribbean Sea, with scheduled flights Monday. The National Hurricane Center expected Jose to move northward and not impact the United States.

“We’ll hope that’s exactly what happens,” Dunn said. “Irma is probably going to do enough down there.”

By Corey Dickstein, Stars and Stripes

©2017 the Stars and Stripes,Distributed by Tribune Content Agency, LLC.