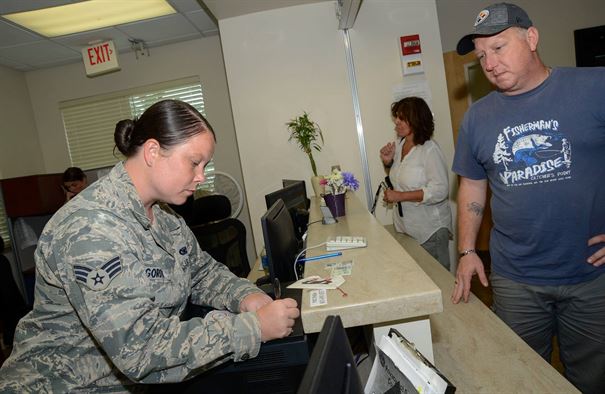 That one test failure while stationed at Malmstrom Air Force Base, Montana, led to the discovery of a tumor in 2014.

During the pushup portion of her PT evaluation, Gordon said she felt pressure in her left wrist and was unable to lower herself to the full 90 degree position without pain. This caused her to fail that portion of the test.

“There was no visual bump at the time, so I kept going in (to the medical group) saying ‘This is hurting. Can we take x-rays?’” said Gordon. “They would take x-rays, but they would say, ‘Nothing’s wrong. You probably just sprained it.’”

Six months later, it was still hurting her, Gordon said.

“I requested for an MRI and they sent me downtown,” said Gordon. “After the MRI, I got called back in the same day. They told me I needed to go to Spokane (Washington), which is seven hours away, for a surgery.”

The surgery included scraping out the tumor and filling the bone with medical-grade concrete, then placing a rod in her arm.

Gordon did not notify her family and friends of the tumor or the surgery to remove it until after the procedure was complete.

“I didn’t tell my mom until after I had the first surgery,” Gordon said. “So I just told her I had a bone tumor and had it surgically removed, but everything is okay now. The second and third time it came back … I just told them.”

Gordon was back to work and focused on her career and family after only two weeks of recovery.

“Gordon’s spirit is highly contagious, and everyone she works with or around feels it,” said Tech. Sgt. Russell Statham, 20th SFS standardization and evaluation chief. “She is very up front and frank about her medical challenges, and it’s humbling to hear her speak about her fight and the surgeries and treatments she has endured. The entire (work) section is better off because she is here. It makes you appreciate what you have, and it also keeps you in check when you think you have it bad.”

After Gordon moved to Shaw AFB, South Carolina in April 2015, her physicians discovered the tumor’s return. In August of that year, she was diagnosed with a malignant giant cell tumor which grew inside her left carpal bone.

“The second (ocurrence) I was sent to Miami,” said Gordon. “The doctor scraped out the tumor again and filled it with a bone graft. Before my body could accept the graft, the tumor came back. I was in a follow-up appointment in Camden (South Carolina) when it was found.”
It was only a month after the second tumor was removed when Gordon’s physicians discovered its next return. In January 2016, she and her physicians decided that chemotherapy was the best option to rid her of the tumor.

Beginning in May 2016 and throughout her year of chemotherapy, Gordon continued to work every day but Wednesdays, which were her scheduled chemo days.

“This is a young woman who went through chemo treatments and kept working like it was nothing,” said Statham. “You can’t help but be inspired by Senior Airman Gordon; she is that person that no one has anything bad to say about. I think her most enduring quality is that with everything going on she maintains her sense of humor; she is always laughing and making others laugh.”

After the year of chemotherapy treatment, Gordon underwent a third procedure to remove the shrunken tumor and infected bone.

In Charleston, South Carolina, May 2017, the tumor and bone were cut out to just below the elbow and replaced with a cadaver bone. The carpal bones and new bone were then fused together and a new rod was put into place.

“So when I first found out, I just said, ‘Well, just take it out. Just fix me,’” Gordon said. “I just wanted them to fix me. I never wanted anyone to feel sorry for me.”

During her three-year, arduous journey, Gordon survived a year of chemotherapy and three surgeries.

Gordon believes her experiences and medical complications caused her to become a stronger and more resilient person.

“I think this has made me stronger as a person because so many people have little stuff they are worried about when they have so many more good things in their life,” said Gordon. “I lost my dad while I was going through chemotherapy. I just thought to myself, ‘It could have been a lot worse than what it was.’ It gave me a new perspective on everything.”

Gordon expressed she was close with her father and his passing was painful for her. She had to remain strong for not only herself, but for her sisters, when he passed away in March 2017.

While she endured treatments and focused on work, Gordon claims the one person who inspired her the most while going through all the surgeries and chemotherapy was her five-year-old daughter.

“My daughter, Aaliyah, helped me by always having a smile on her face,” Gordon said. “Even when she saw the oncology nurse come in with the medicine, she would tell me, ‘It only last a little bit.’”

Gordon states her daughter also inspired her by talking to the other patients who were there at the time; most of whom were there alone.

While Gordon was uplifted by Aaliyah’s bright and hopeful disposition, she still faced some challenging moments.

“The worst part of it was the chemo,” Gordon said. “It was May 17th when the cast from the last surgery was cut off. All my tendons and nerves had been cut, so I wasn’t able to move my fingers at all. I have been going to occupational therapy at Fort Jackson and gaining strength in my arm and hand, but it’s not up to where it was. The tumor is gone though, and it hasn’t come back.”

After her recent experiences, Gordon’s decision in career path changed.

“Before I was diagnosed with having this bone tumor, I used to want to be a forensic DNA analyst,” Gordon said. “When I started to go through chemo and witness how much of a difference the oncology nurses make in someone’s life, I decided I wanted to become a nurse.”

Gordon declared she learned a valuable lesson during her experience that she shares with everyone she can.

“If you know there is something wrong with you and the doctors aren’t giving you an answer that makes sense, just keep going back,” said Gordon. “Even if it’s just a small thing; it could turn into something big, like mine did. Be persistent and demanding enough to get what you need.”

Although it took a PT failure to discover her condition, Gordon demonstrated her resilience and strength by beating the tumors that, true to Aaliyah’s hopeful mantra, only lasted a little bit.