By Airman Chad Gorecki, 375th Air Mobility Wing Public Affairs For one Algerian family, 6,600 miles was the distance between... 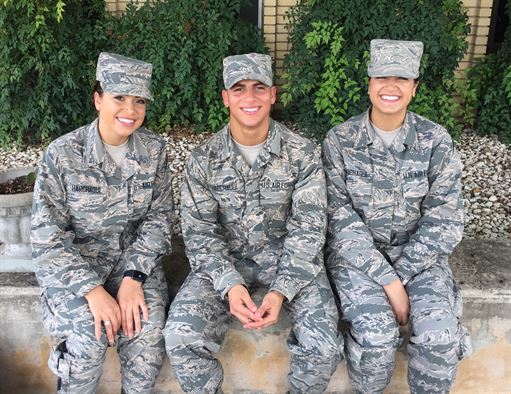 For one Algerian family, 6,600 miles was the distance between a life of struggle, promise and opportunity.

Their journey has carried them over thousands of miles, from a barren region in Africa to California’s Simi Valley where eventually the Harchaoui triplets — Myriam, Rabah and Warda — would join the U.S. Air Force. Scott Air Force Base is now home to Myriam, who recently reflected on her unique journey.

“Growing up we were very poor,” said Airman Myriam Harchaoui, a 436th Supply Chain Operations Squadron C-130 stock control apprentice. “Our mom fought for us to move to the states because of life (in Algeria). It was like the movies — a desert with a ton of beat-up buildings.”

Her mother, Brigit Wilcox, arrived in California at first with just the three boys in the family, leaving Myriam and her sister, Warda, in the care of grandparents. They were not able to come at the same time because the government only allowed the boys to leave, but when the girls reached age 5, they were able to join their family.

When they arrived they didn’t know how to speak English and had to adjust to the different culture. Myriam said she was able to pick up the language quickly, and Warda, now an Airman assigned to the 60th Medical Operations Squadron at Travis AFB, California, said she learned the language through the Boys and Girls Club.

Their brother, Rabah, who is an Airman assigned to the 56th Security Forces Squadron, at Luke AFB, Arizona, was age 2 when he moved so it’s all he’s really known.

“Growing up here gave me a lot of opportunities and it has been a blessing so far,” he said.

After graduating high school, the Harchaouis saw the Air Force as a good option because their older brother, Sofiane, had served six years as an F-16 avionics specialist.

Additionally, the triplets were a part of their high school’s Junior ROTC, so they were introduced to the idea of the military early.

In 2016, they each raised their right hand in commitment to the Air Force, and they each had their own reason for doing so.

Myriam said, “When I was younger I always wanted to join since the government had done so much for us and getting my family to the states, that I saw it as a way to give back.”

Warda and Rabah said they saw the opportunities the military lifestyle offered.

“Having a single mother with five children, we couldn’t all be put through college,” Warda said. “I wanted to avoid the mistake of going through college right away and not knowing what I wanted to do, and I saw what the Air Force was able to offer.”

For Rabah, the military was a stepping stone for life after high school that could also provide college opportunities.

Even with all of the benefits the military life has offered, Myriam said this has been the longest they have been apart since those early years, and it has been difficult for them and especially their mother. Still, she has remained very supportive of their decisions.

“It went from all of us being together at home to everyone being gone,” Myriam said. “It was a fast change for her, but she is okay with it because having our brother already serve, she knew the military would take care of us. It has been hard, but she has been very optimistic because she has always wanted the best for us and she pushed us to be successful.”

The distance that comes with being members of the military has been tough on the family, but it has also helped strengthen the bond between them. The triplets stay in touch with each other through a group chat where they talk every day, said Myriam.

Rabah added, “We always communicate which has made it easier to get through some of the tough times in the military so far. Communication has been key. We can all motivate each other, and we are in this together. Even though we aren’t under the same roof, we are still together in heart.”