The American Dream isn’t just an expression, it’s a lifestyle worth striving toward. For many people across the world, democracy,... 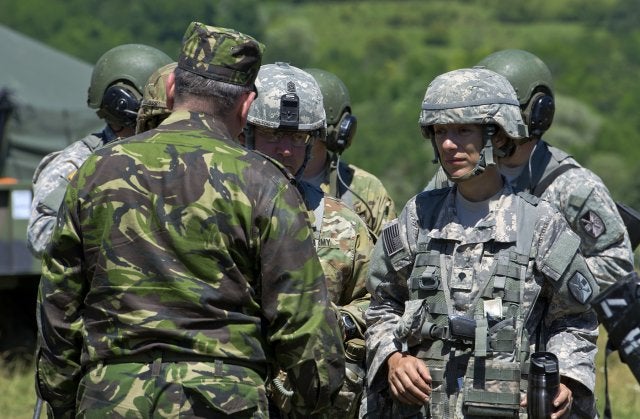 The American Dream isn’t just an expression, it’s a lifestyle worth striving toward. For many people across the world, democracy, liberty and the opportunity for prosperity and success are some of the reasons individuals pine for the experience to live in the United States.

With that in mind, one National Guard Soldier uprooted her life for the chance to “pursue happiness” when she decided to leave her family and her life in Europe for a new journey in the United States.

Spc. Gizela Lupescu was born in Bucharest, Romania, and was raised by two teachers who instilled a pride in her to strive for more out of life and to grasp every opportunity to better herself. She grew up in a culture where religious, educational and family-oriented traditions were very important.

She recalled the beauty of Romania and her wonderful childhood, knowing she could never replace those fond memories. However, as she got older, she started looking at other democratic countries and found her thoughts immersed in the American way of life.

After Lupescu graduated from college, at the age of 21, she finally had the opportunity to move to the United States, and those thoughts of chasing that American Dream that she envisioned while growing up as a child transitioned into a reality.

“To be fairly honest, I guess it’s the way I was raised,” said Lupescu while discussing what encouraged here to move to America. “It’s a typical Romanian thing. My parents put my sister and I through school, they raised us on Romanian traditions, provided our family with the best they could give us and then at that point it was time for me to spread my wings and fly.”

As she trasitioned from Romania to America, her background caused her to gravitate toward the Romanian population, which seemed second nature to her. At that point in time, Lupescu started to settle in, she found a counseling job with the Girl Scouts and her new Romanian friends began showing her the beautiful and interesting opportunities America had to offer.

As she learned more about the foreign culture, her curiosity grew and she wanted to look further, explore and discover more about this dream that she was living. The thought of leaving the United States never crossed her mind; she was hooked.

“I furthered my efforts and applied for legalization for adjustment of status, which took an extremely long time,” said Lupescu. “The more time passed the more I saw that my naturalization had to happen because I couldn’t justify the time spent in the United States if I were to give up and go back to Romania empty handed or defeated.”

After a 13-year process, Lupescu finally received her permanent resident status, and with the same personal drive that inspired her to chase the American Dream, it encouraged her to pursue a challenge that only a small percentage of Americans accept. She wanted to join a branch of the Armed Forces. Without a specific branch in mind, it was no coincidence that she lived near one of the largest military installation in the nation, Fort Bragg, North Carolina.

“I figured the North Carolina National Guard was a good place to start,” said Lupescu. “I fell in love with the National Guard, [and] the dedication to state, federal and country duty intrigued me. I saw it as a challenge and it is a challenge that I was happy to take on.”

After the completion of her entry-level training, Lupescu was assigned to the 60th Battalion, 230th Brigade Support Battalion, as a Combat Medic Specialist (68W). Once she arrived to her unit, she realized the North Carolina National Guard had a partnership within eastern Europe. Never really expecting that her unit would deploy to Romania, she still decided to inform her chain of command of her background and how her language proficiency could be an asset if the unit ever received a mission in that part of Europe.

A sister battalion of High Mobility Artillery Rocket Systems learned of her unique background prior to deploying to Romania and requested to bring her along as a linguist.

From her perspective, it’s very important that Americans and Romanians train together to provide regional stability and security, while strengthening partner capabilities during Getica Saber.

“Thinking from a Romanian perspective, I think that Americans couldn’t have found a better ally to work with, and a better place to deploy and train,” she said. “So this ‘marriage’, if you will, is a very good one.”

Lupescu also took the time to discuss what her parents thought about her joining the ranks of the U.S. Armed Forces.

“So I joined after my dad died,” an emotional Lupescu said. “My dad would have been thrilled. He is the type of guy that would’ve said, ‘Oh hell yeah, go try it out, see how it is. If it’s not for you it’s okay, you have an experience.’ My mom is the, ‘my baby what are you doing’ type of person. So I’m trying not to explain to her every detail that we go through, our training and how you have to toughen up to become a Soldier.

“She’s proud of me. I don’t think she knows how to put it into words, but I can read it on her face and in the way she embraces me. She trusts me to the point of making my own decisions and besides the fact that she thinks I’m nuts for joining any service at 35, she knows who I am as a person. She knows that I will try anything at least once.”

For Spc. Lupescu, family had always been a central focus in everything she does.

“I don’t think it’s easy to start with nothing in any country. It’s just the will of doing something to better yourself, to reach back and take care of your family,” she said.