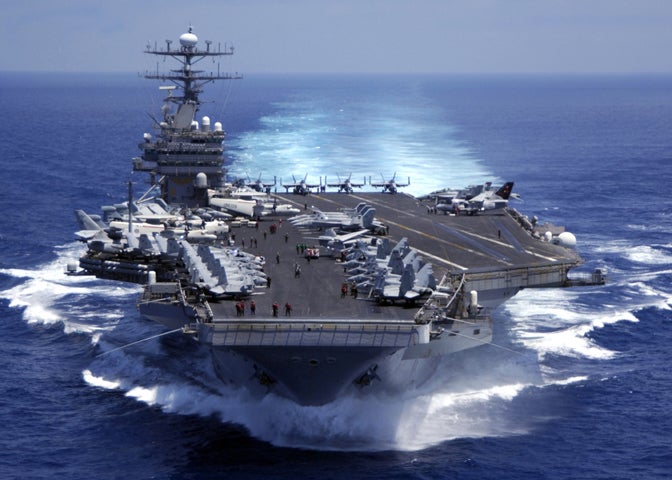 “The Green Machine is a Sailor-led effort on Carl Vinson to reduce shipboard waste, increase recycling, and have a positive environmental impact in our local communities,” explained Carl Vinson’s Safety Officer Cmdr. Eric C. Wever. “One of the best ways to achieve these goals is with deckplate-level efforts like the Green Machine.” “Out to sea, our main goal is to recycle as much cardboard and as many aluminum cans as we can and also to reduce the amount of plastic we use onboard,” said Green Machine Committee Chairman Chief Aviation Electronics Technician (AW/SW) Baron L. Brown. “For example, last deployment we issued a sports bottle to each Sailor onboard to reduce the amount of plastic and paper cups used. ”

The size of Carl Vinson and her crew makes it imperative to carefully examine the amount of recyclable waste produced and manage it accordingly, Brown said.

The numbers increase when tenant commands come aboard. The addition of Sailors assigned to Carrier Air Wing 17 (CVW-17) and Carrier Strike Group One (CSG-1), raises the averages to one metric ton of recyclable cardboard waste and 1,000 pounds of aluminum can waste produced per day, Brown explained. “The Green Machine is working diligently to reduce and recycle that waste we create.”

For example, during Carl Vinson’s six-month Western Pacific (WESTPAC) 2011-2012 deployment, the Green Machine cooperated with replenishment ships to ensure offloaded cardboard and aluminum waste was disposed of properly at whichever base the waste was delivered to.

“I can say with pride that we’re the first carrier to recycle on the scale we do,” Brown said. “So, until someone beats our metrics, we are the greenest carrier in the fleet.”

Vinson’s Green Machine has no intention of resting on past successes and invited all hands to become active members during a Feb. 15 meeting.

“This is a great opportunity to get involved with your command and with our local community,” Glover said. “Helping to save our community for the present and future generations is a great way to make a huge impact on Earth.”

“In port, our goal is to help the community,” Brown added. “We want the community to know Carl Vinson is devoted to environmental stewardship.”

The Green Machine is holding a beach cleanup Feb. 22 at Breaker’s beach on Naval Air Station North Island (NASNI) and is planning an event for Earth Day April 22.

“If you are interested in protecting the environment, reducing waste, and having fun, then come out and talk to us,” Brown said. “We always want more volunteers to help. The more people we can get to help, the better the program will do. It’s an amazing feeling once you realize the difference you can make in the community.”

The Green Machine meetings are held once a month to share ideas, discuss events and plan community relations projects, but its Sailors spread the word about the importance of environmental preservation all month long.

“Going forward, we want to establish a strong presence within the community,” Brown said. “We want to be known as an entity that recycles, reduces, and reuses. Carl Vinson is definitely doing its part to protect the environment for future generations.”