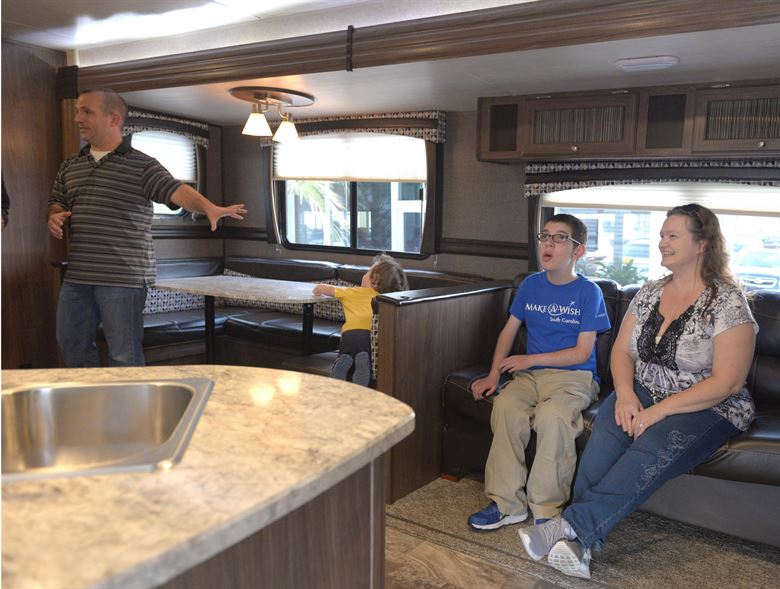 “Nathan was born in Hawaii in January of 2001. Picture perfect pregnancy, no issues, he was 38 weeks and a day. My wife hit all of the milestones; everything was great and then it all just went downhill really quickly,” explained Braddick.

Shortly after birth, Nathan was diagnosed with a ventricle septal defect, also known as a hole in the heart, as well as a heart valve disorder. After open heart surgery, Braddick and his family thought the worst was behind them.

“They repaired the hole in his heart and the valve,” said Braddick. “So at the time, we thought we were good. The heart is fixed, he’s going to grow up to be a normal child. Later, we went to the 12-month post-op checkup and once again the floodgates opened.”

Nathan was diagnosed with pulmonary hypertension, a serious condition which could ultimately lead to heart failure. When genetic testing technology advanced in 2010, he was officially diagnosed with MECP2 duplication syndrome.

“As Nathan grew, he started to get away from kids of his age group,” said Braddick. “The doctors like to chart kids as a developmental line to see if he was hitting all of his milestones. The difference between Nathan’s abilities and where he was supposed to be just grew and grew and grew.”

The rare disorder is characterized by severe intellectual disability, impaired motor function and for Nathan, it also meant over 80 hospitalizations for lung infections alone.

As a military family, the Braddicks are no strangers to moving or deploying, but as a special needs family, the line between family and country becomes even more difficult to navigate.

“It does take a lot away from work,” said Braddick. “You do have to make a choice; what’s more important? Work or staying home and taking care of Nathan? Finding that balance is incredibly hard.”

Throughout his 18-year career, Braddick has deployed five times, the most recent deployment being a 12-month tasking in Afghanistan as a civil engineering advisor.

“The deployments are really hard, because of having to take care of Nathan,” said Braddick’s wife Renee. “Actually, last time Steven was deployed he was brought back twice because Nathan was taken to the hospital in critical condition. The Air Force was very good about making sure we got him back so we could be in the hospital together. The Air Force has always worked really hard for us.”

The family credits Braddick’s supervisors and base leadership with allowing them the flexibility to take care of Nathan.

“Leadership has been phenomenal and understanding. In the last two months, Nathan has had two surgeries. He had one surgery in September and another hospitalization in October. They said, ‘Go, don’t worry about this. We’ve got this,’” said Braddick.

Todd Martin, Braddick’s supervisor at the 628th CES, echoed the Air Force’s focus on taking care of its Airmen and their families by creating an understanding work environment which prioritizes family. However, Braddick continues to contribute to the squadron’s success despite his demanding home life.

“He has a very strong sense of being a team leader,” said Martin. “He was an integral part of winning the unit CE awards because of his work and the efforts of his team. I’m in awe of how he manages his responsibilities at home because it doesn’t affect his work. It makes me tired to think about how much he has to do in a day and yet still does his job admirably.”

In addition to the support from supervisors and family, the hospital staff at the Medical University of South Carolina in downtown Charleston assisted the Braddicks. MUSC worked with volunteers from Hands of Hope, an organization providing pediatric comfort care to children with life-limiting illnesses, to nominate Nathan for a gift from the Make-A-Wish Foundation. After hearing Nathan was selected, the family chose to receive a camper trailer.

“The traditional trips to Disney were a waste of time because he doesn’t understand what’s going on,” said Braddick. “So we bounced around a lot of things and said, ‘Well hey, Nathan really enjoys road trips. He loves going for a drive; he likes watching the cars driving by.’”

However, using public restrooms or going to public restaurants can be very overwhelming for Nathan so having a private, quiet environment where they can fit all of his medical equipment was key.

Thanks to the support of so many, the Braddicks now have the tools to make valuable family memories and show Nathan a world beyond his illness.