Another cold one with the boys: Coral Sea veteran laid to rest with shipmates 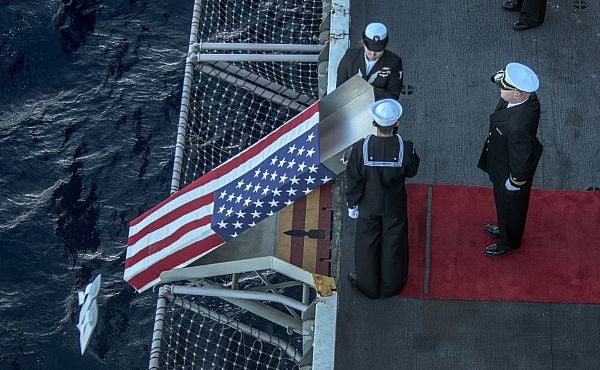 One, two, three, four, five torpedoes forged their way through the ship’s hull, quaking the deck of Lexington beneath the feet of the fearful Sailors. The deck, still vibrating, began to scorch from the flames that blazed below decks among the unfolding chaos.

Shoes were lined up side-by-side along the flight deck, their exhausted owners waiting in anticipation for the final call to abandon their home. Three days out from Pearl Harbor, the sea glistened with oil from shipwrecks that would come to know their final resting place as Coral Sea.

“They held musters on the flight deck by division,” said former Lexington crew member, Julius “Harry” Frey, in an interview conducted in 2002. “One guy said, ‘Well, I better take my shoes off, we’re going to be in the water,’ so they were taking their shoes off and lining them up in pairs. I said, ‘Well, wherever I’m going, I’m going to need my shoes.’ So I left mine on. I would reiterate that this is the time that I realized where we were, the proximity to the geedunk shop, which is where all the ice cream was.”

“Ice cream,” would be an unexpected thought on most Sailors’ minds as they prepare to egress from their crippled ship, using the warily-thin knotted “monkey lines” that draped treacherously over the side of Lexington.

Torpedoes coming from every direction, fires rampaging deep within the ship and enemy fighter jets looming overhead did not deter the 18-year-old Frey from scaling an eight-foot drop over the side of the flight deck to reach Lexington’s geedunk shop and breaking the lock with a fire axe in pursuit of the frozen treat. Removing the helmet that served him as an aviation metalsmith, Frey converted the piece of life-saving equipment into an effective transport for the ship’s stock of pineapple sherbet.

After passing the sherbet up to the flight deck and into the hands of his hungry shipmates, Harry jumped backwards to catch hold of the waterway gutter on the flight deck, then swung himself back up to claim his prize.

A multi-sport high school athlete, Harry’s outstanding physical prowess not only played a huge part in recovering the sherbet, but also in his survival. He scaled down the slick monkey lines into the unforgiving sea, where he tread water with rope-burned hands until he was picked up by a destroyer.

“That’s the only time in my life so far that I’ve suffered complete exhaustion, that is I could not move,” said Frey. “I could hear everybody and I opened my eyes and I could see, but I couldn’t turn my head to see anything else. Just completely exhausted, just could not move, but I could open my eyes. I could see these starched, pressed britches of this neighbor of mine, who was a Marine and who was the executive officer’s orderly, and hear him say, ‘Well I know him. He’s from San Antonio. He was a neighbor of mine.'”

Following his rescue by the destroyer, Frey was transferred to the cruiser USS Portland (CA 33) and taken to Tongatapu to be placed on the empty troop ship USS Barnett (AP 11) to begin a 32-day journey to San Diego. Frey was honorably discharged in 1946.

On July 15, Frey’s ashes were spread into the Coral Sea, along with the cremains of his wife, Jerry Ann Woodward, during a burial-at-sea ceremony aboard the forward-deployed aircraft carrier, USS Ronald Reagan (CVN 76). The ceremony took place over Lexington’s final resting place, where the waters are now sparkling and free from the oil and destruction that covered them in 1942.

“It is our great honor today to lay to rest our shipmate and his wife, Jerry Ann, on the site of the Battle of Coral Sea,” said Capt. Buzz Donnelly, Ronald Reagan’s commanding officer. “He was a survivor of one of the historic naval battles in our nation’s history, and during his time in service, he exemplified the fighting spirit of the Navy, as well as our core values of honor, courage and commitment.”

Following his honorable discharge from the Navy, Frey earned a bachelor’s degree from Trinity University in San Antonio and went on to pursue a teaching career that lasted for 30 years. During this time, he met and married Jerry Ann, with whom he shared a passion for playing golf, which was likely to be followed with a shared bowl of ice cream.

Harry retired from teaching in 1983 and pursued what he called a life of “playing.”