Are we at war with Syria?

By Anna Blanch Rabe Are we at war with Syria? It’s a straightforward question but one which requires a nuanced... 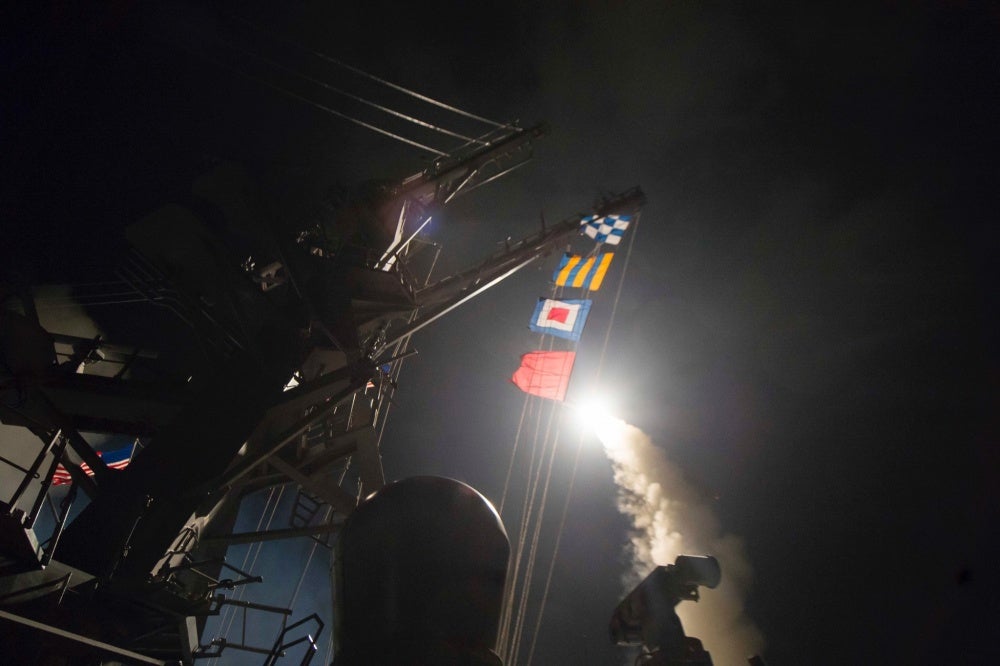 Are we at war with Syria? It’s a straightforward question but one which requires a nuanced answer. As the news of the strikes on the evening of the April 6 flooded the homes and newsfeeds of American families, the uncertainty and confusion about whether this was a declaration of war accompanied the questions about whether this was a politically motivated response or one based on military objectives.

The answer is complicated, in part because it depends on whether you are trying to answer from the perspective of international law, US law, or military history.

Let’s begin with a disclaimer: I will take no position in this article about whether these strikes are a prudent course of action. This is a question of where things stand, not whether it is a good thing or not.

Article 2 of United Nations Charter (1945), and other articles in the charter, seek to curtail the right of member states to declare war; as does the 1928 Kellogg-Briand for those nations who ratified it–which includes the United States. The UN Charter provides that any military intervention requires a Security Council resolution authorizing the action. There are some political reasons why that is often not done (mainly because Russia is a permanent member).

One exception to requiring this resolution is to stop imminent or active acts of genocide. A case can be made that the gassing of civilians–including children–is evidence of genocidal acts. Therefore, emergency action to intervene targeting those locations where chemical weapons and the military equipment used to disseminate them is the exception to the rule. The evidence of the risk of further genocidal-type activities by the Syrian government puts the US government in good standing to argue that their strikes are justified without needing either an imminent threat to US personnel or soil (thus triggering the self-defense exception) or requiring UN Security Council approval.

The statements of the Secretary of State, Rex Tillerson, and President Trump made before and after the strikes are relevant for the reasoning behind an act of war and a determination of whether it is justifiable under the Hague Conventions.

“We are considering an appropriate response for this chemical weapons attack which violates all previous UN resolutions, violates international norms and long-held agreements between parties, including the Syrian regime, the Russian Government, and all other members of the UN Security Council. It’s a serious matter; it requires a serious response,” Secretary of State Rex Tillerson said.

It appears that under international law, the United States is not at war.

It can be argued that because a formal declaration of war by the US Government has rarely occurred since the end of World War I, one is not essential to being “at war” especially in light of the Vietnam, Korean, Afghanistan, and Iraq conflicts. That they are referred to as “wars” is relevant, even if it literally might seem at first semantic.

Congressional involvement is a constitutional matter as much as a legislative. In some ways, provision of financial support for the Department of Defense, in particular as this has risen during the “Global War on Terrorism,” demonstrates implicit approval for previous military intervention in the region.

As far as explicit congressional involvement, the War Powers Act of 1973 is relevant. The act was passed through a veto override. The intention of Congress was to prevent the US from entering protracted military engagements–as the situation in Vietnam had become–without congressional approval. President Nixon, like the presidents that have followed, felt strongly that the War Powers Act represents a limitation on presidential prerogative, viewing it as a violation of the separation of powers and the president’s authority as Commander in Chief. The act has never been used.

At the same time, the constitutional presidential war power–as an extension of the authority of Commander in Chief — is predicated on situations where an attack by another nation on the US is in progress; for example, missiles are inbound.

Are we at war in Syria? Yes, in that American troops have been in the country for some time now in relation to the Global War on Terrorism and seeking to reclaim Raqqa from ISIS. However, this is not the same as being at war with Syria. A formal declaration of war has not been approved by Congress, but it is not clear that one would be necessary for the US to deploy a significant ground troop presence. The strikes can be considered to be a conditional act of war contingent on the Syrian government’s illegal acts in deploying chemical weapons on their own citizens.

The Socio-political and military context

The Syrian Civil War has been ongoing since 2011, beginning at a similar time to the Arab Spring uprisings. International aid organizations estimate the total deaths at just under a half million.

President Obama made clear statements indicating that the use of chemical weapons in Syria was a red line that could prompt an American military response. The Obama administration reported that Assad–or regime elements supporting Assad under his command–used poison gas in a major attack on civilians in 2013.  He didn’t follow through on earlier statements that use of chemical weapons because he tried to get approval from Congress and was unsuccessful.

ISIS came to power in Iraq and subsequently became a presence in Syria, reaching critical mass around 2014. What this means is that, in reality, we have been in a state of armed conflict in Syria for three or more years.

Russia has strong ties in Syria and arguably in keeping Assad in power. These ties include Russia’s primary warm water port, as well as a major Russian Air Force installation, which gives Russia military reach throughout Central Asia and the Mediterranean. Russia has used a combination of instruments of power to get President Obama to retreat from his “red line” threat, particularly Russia’s ability to veto UN Security Council resolutions authorizing force to oust Assad.

As a compromise, Putin and Obama arranged a deal for the known chemical weapon stockpiles in Syria to be transported to Russia. Since that time, there has been a substantial increase in Russian military involvement in the Syrian Civil War.

Because ISIS is a common enemy, there has be a delicate détente in which the US has been seeking out ISIS in Syria while the Assad regime elements go after anti-regime rebel groups. This has seen US, Syrian, rebel, and Russian military elements in close proximity and in situations of high tension. Since the attacks yesterday, Russia has already announced their intention to assist Syria in strengthening their air defenses.

President Trump issued an Executive Order banning both travel by Syrian-born individuals on non-immigrant visas and refugees. (I’ve written about the impact of those orders on military families including background to their general effect and legal status.)

In this incredibly short history of the complex history of Syria and US involvement since 2011, we find ourselves here being international witnesses to another major chemical attack on Syrian civilians. Children and families who were clearly non-combatants were gassed to death while they slept. While this is no worse than those who are and have been killed in another fashion, it triggers the aspects of the Hague conventions that focus on chemical weapons, and the socio-political belief that chemical weapons are a worse form of injury and death than conventional weaponry.

Either way, military families are waiting to see what happens next.