Are your husbands growing caterpillars on their face?

Mustache March is a tradition that finds its origins within the United States Air Force. It's founder was Colonel Robin Olds. Col Olds started his illustrious career as a graduate of the U.S Military Academy in West Point, NY. 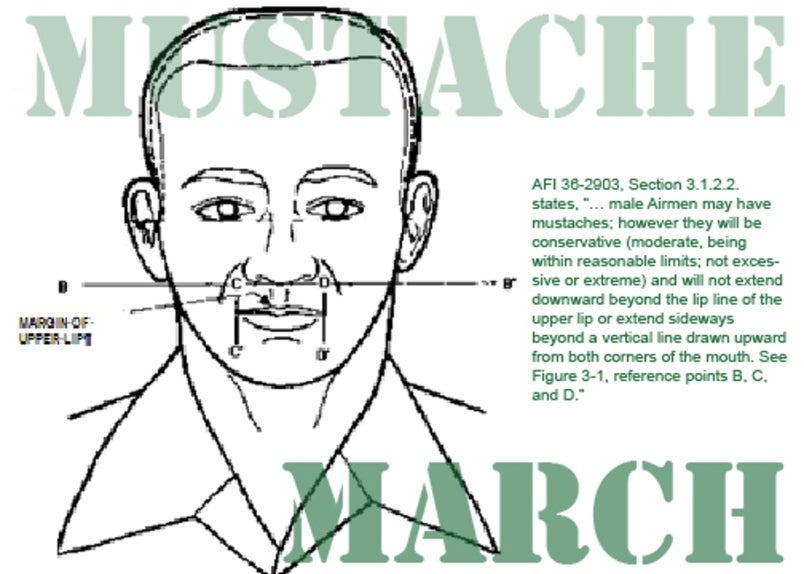 March is full of fun events. The two that probably come to mind for most people are St. Patrick’s Day and of course NCAA March Madness. There is one tradition that has recently become a huge trend. It’s something most men take for granted, but for the small percent that are in the military it means an opportunity to express our manliness. Mustache March! I’m sure a lot of people are aware of this wonderful time of the year, but not many know why it started or who started it. Mustache March, for those that live in a cave, is a full month where men can grow out their most bodacious face caterpillar. I know some of you all are reading this and are saying ‘What’s the big deal, what is so special about growing out a mustache?’ Being in the military restricts men’s natural urge to grow facial hair. We torture our faces by shaving EVERY day with only two days to allow much needed ‘Crew Rest’ for some of the most sensitive skin on the human body. Ladies, you get a small glimpse of this during the summer when you shave your legs. Remember those nicks and cuts you get sometimes while trying to achieve silky smooth legs? Well, we get to enjoy those same cuts on our face all week, every week and to add insult to injury we splash alcohol (Aftershave) on them to cleanse the cuts and of course smell absolutely awesome. It’s a sacrifice we make to please the military’s regulations of grooming standards and in turn make the women in our lives happier that we don’t scratch their faces up with bristly hair. So, this month we get a free pass both at work and hopefully at home to give our upper lip a break.

Mustache March is a tradition that finds its origins within the United States Air Force. It’s founder was Colonel Robin Olds. Col Olds started his illustrious career as a graduate of the U.S Military Academy in West Point, NY. He was an accomplished fighter pilot who was honored with the title of ‘Triple Ace’ piling up 17 confirmed kills. To become an Ace you only need 5 confirmed kills. He served in both WWII and the Vietnam war earning kills in both wars. His tenacity, leadership and tactical prowess earned him a place in Air Force History. Although his men loved the ‘stache, not everyone was too thrilled that he was far beyond grooming standard for the Air Force.

“As an act of defiance towards a U.S. military that was providing him with poorly trained pilots and lackluster support during the Vietnam War, Robin Olds grew a large handlebar mustache, a direct violation of Air Force grooming regulations. During the war, most of his superiors found the mustache humorous, but when Olds returned to the United States he quickly found that not everybody was laughing. “I remember my first interview with (Air Force Chief of Staff Gen. John P.) McConnell,” Olds said. “I walked briskly through the door, stopped and snapped a salute. He walked up to me, stuck a finger under my nose and said, ‘Take it off!’ And I said, ‘Yes, sir!’ And that was the end of that.” (National Aviation Hall Of Fame)

Col Olds was briefly promoted to the rank of Brigadier General in 1968 and retired in 1973. He passed away at the age of 84 in 2007. We celebrate this Air Force Legend by growing out our largely unwelcomed lip rug. Here is to you sir, up there, in the wild blue yonder.

Thank you to Ariel Echevarria from Daddy Combat for this fun blog!

Ariel is an Air Force veteran of 12 years and still currently serving.

Born in Norfolk, VA to a military family, Ariel moved around all throughout his childhood.
He is expecting his first child in June and is super excited to become a dad.
He enjoys Football, New Tech gadgets, and spending time with his wife and Pitbull Rocky.