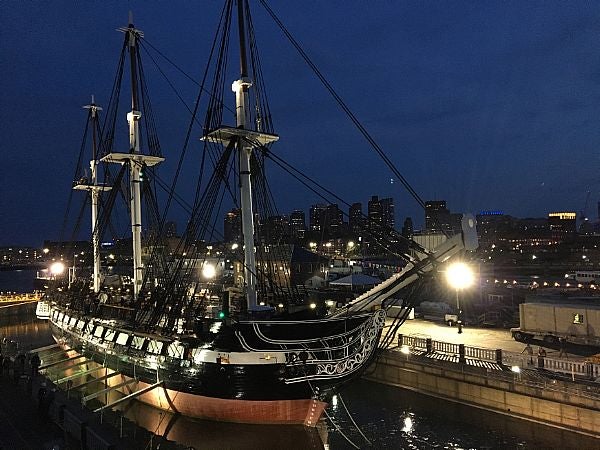 Since entering dry dock on May 18, 2015, ship restorers from the Naval History and Heritage Command Detachment Boston, and teams of Constitution Sailors have worked tirelessly side-by-side to bring Old Ironsides back to her glory.

Captain Robert S. Gerosa, Jr., commanding officer of Constitution, said he was proud of the hard work and dedication of his Sailors during the restoration.

“The significance of the water coming in the dry dock is the start of the evolution,” said Gerosa. “It’s the start of getting Constitution back in the water. This is it, this is what we’ve been striving for the last 26 months. We are again in the water where ships need to be.”

The restoration saw the replacement of 100 hull planks and the required caulking, the re-building of the ship’s cutwater on the bow, and the on-going preservation and repair of the ship’s rigging, upper masts and yards.

“All of the Detachment Boston employees take great pride in the work accomplished,” said Moore. “The ship restorers, riggers and blacksmith are a group of skilled craftspeople who have put their talents to great use during Constitution’s dry dock restoration. Tonight’s successful undocking is the culmination of the Detachment Boston’s hard work on Old Ironsides over the past 26 months.”

Restoring the ship in keeping with the tenets of her original design was an important objective said Naval History and Heritage Command Director Sam Cox.

“Expanding that advantage has been the objective of Navy shipbuilders since Constitution’s keel was laid,” Cox continued. “Just yesterday, the Navy commissioned the USS Gerald R. Ford, a technological marvel of today. Ford and her crew will make history in new and innovative ways and can trace their lineage back to USS Constitution and the Sailors who first took her to sea in 1797.”

One of the most highly anticipated tasks was the replacement of Constitution’s copper sheathing below the waterline. Copper sheathing has covered the lower hull since her launch in 1797, as protection against ship worms that could damage the wooden hull.

This was one part of the restoration that saw Constitution Sailors get hands-on with preservation work to America’s Ship of State. Sailors helped the Naval History and Heritage Command Detachment Boston ship restorers replace 2200 sheets of copper and the felt that is installed behind it.

“It’s an incredible feeling to be a part of the team to work on Constitution,” said Aviation Ordnanceman Hunter Sensign. “Every day I came to work and it really sinks in that I’m working on a ship that’s 219 years old.”

As the tide in Boston Harbor turned and began to rise, shipyard workers opened the valves in the caisson, the “floating gate” that has held back the harbor water and Dry Dock 1 flooded. It was the first time the sea has touched Constitution’s hull in 26 months.

It was a long day for the Naval History and Heritage Command Detachment Boston, Constitution’s Sailors, and the staff from the Portsmouth Naval Shipyard as the dry dock flooded and a team of Portsmouth Shipyard divers checked her hull. Constitution finally lifted from her keel blocks at about 9:45 p.m.

At 11:15 p.m., after checks were completed, Constitution crossed the sill of the dry dock and into Boston Harbor.

Constitution started her service in the U.S. Navy with her launch Oct. 21, 1797. She was one of the six original frigates which began the new United States Navy and construction was authorized by an act of Congress in 1794. She and sister frigates were designed by shipbuilder Joshua Humphreys. As the Navy’s capital ships, they were larger and more heavily armed than frigates that had come before her, Constitution and her sisters became formidable opponents on the high seas.

Her keel was laid in Edmund Hartt’s Shipyard in Boston. She was built from the resilient Southern live oak from Georgia and her three masts were made from the strong white pine of Maine. Humphreys designed her hull at 22 inches thick at the waterline and to protect the hull, copper sheathing was added.

Undefeated in battle, she fought wars on the high seas, from the Quasi War with France to the Barbary Wars and most notably the War of 1812 against Great Britain. Her defining and most historic battle was with the British frigate HMS Guerriere, during which one of Constitution’s sailors noticed that some of the enemy’s cannon shot appeared to fall harmlessly off her hull. “Huzza! Her sides are made of iron!”, the sailor purportedly shouted – thus she earned her the nickname Old Ironsides.

Constitution remains in service to her country today, sharing the history and heritage of America’s Navy. The ship is expected to continue post-docking restoration work before re-opening to the public in early September.