Ask Yourself, ‘Why Not Today?’

This piece originally appeared on ArmyWife Network MilSpouseFest is headed to Offutt Nebraska in September, Colorado in October and San... 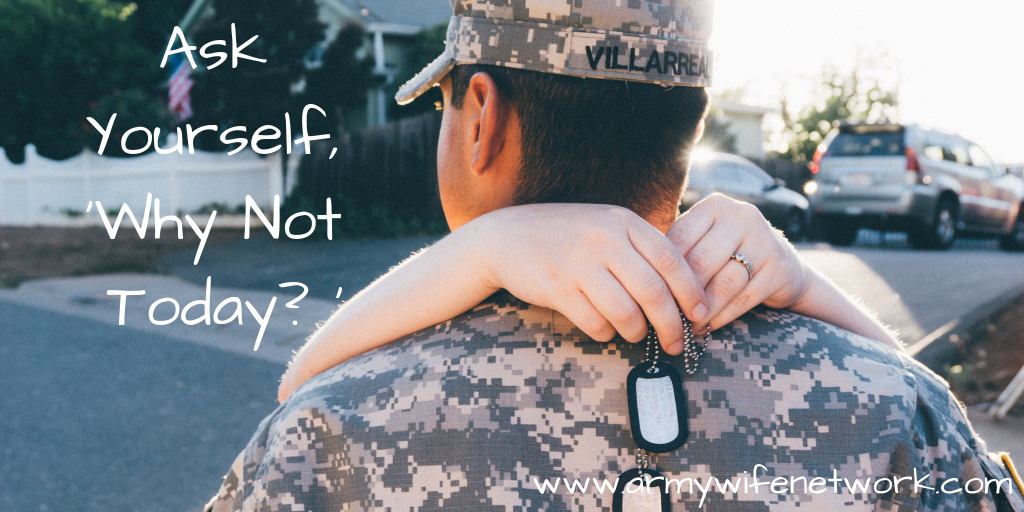 MilSpouseFest is headed to Offutt Nebraska in September, Colorado in October and San Diego and Camp Pendleton in November.  Check out our 2019 dates and locations here and reserve your seat.

When married to a service member, you may sometimes feel like you take a backseat in military life. You put a lot of your own energy behind your service member spouse, encouraging, planning, packing, and moving, among other things. You celebrate the promotions, the graduations, getting that perfect duty station… But sometimes, as a spouse, you find yourself wanting more. You may find yourself asking, is it my turn yet?

Wouldn’t it be nice if someone not only helped you answer a “why not” question, but helped you achieve even one small step toward that goal? Back in 2011, when I was a young milspouse who had just landed her first job, Army Wife Network was doing what they called “Field Exercises.” Founders Tara Crooks and Star Henderson would visit installations around the U.S., offering milspouses a night out with fellow spouses, talking about things we all just get. As a young reporter, it was my very first story for the post newspaper. But as a milspouse with less than a year at her first-ever duty station, it was an evening full of laughs where no one needed to feel shy.

But now another organization is taking the guidon, so to speak, and doing its own exciting event. MilSpouseFest is an organization that evolved from a former group called MilitaryOneClick, originally a website that offered various military spouse resources with the click of a button. MilSpouseFest has taken the original idea further, establishing an event series that travels around the United States, offering a day of fun to military spouses across all service branches.

Attendees receive a day of fun, led by military spouses who have been there, done that, many times over, in a conference-style few hours together.

So how much does it cost?

Nothing. It is an absolutely free event!

The next MilSpouseFest will be held near Fort Benning at Rivermill Events Center on Feb. 12 with a morning session from 9 a.m.-2 p.m. and an evening session from 5:30-9 p.m. If you’re interested in attending, you can go here to sign up. Simply choose your preferred time. While there is no child care available for the event, babies in arms are welcome, and stroller parking may be provided.

“Spouses will find time to connect through fun ice breakers, during lunch, and even when visiting our sponsor tables. We will have engaging segments about how to make sure your family is financially set up for success, how to get energized on going back to school, and so much more. What we will not do is bore you with Powerpoint,” said Danya Devine, the Director of Events for MilSpouseFest.

Danya’s goal for every MilSpouseFest is to ensure that every attendee who walks out the door has made a connection with someone that day.

“That connection can be anything from making a new friend, to getting a job, to connecting with oneself and feeling energized about this crazy military life we live,” she said. “I hope the spouses can let go of any fears they may have had and say to themselves, ‘Why not go get that dream job? Why not reach out and ask that lady next to me if she wants to go to coffee? Why not go home and talk to my spouse about our retirement plans?’ Why not today?” Danya, a Navy spouse, said.

The general agenda includes check-in, meeting vendors, and sitting down for a meal. The event progresses with networking, education, games, and prizes, along with guest speakers peppered into the mix. Maybe you aren’t so into sitting at a table and observing. Maybe you’re wondering how you can do more. MilSpouseFest has a place for you, too.

Every event is possible because of the numerous volunteers who help things run smoothly, all selected from the local military installation.

One of our AWN contributors, Jolene McNutt, volunteered for the Fort Bragg MilSpouseFest in 2018.

“It was easy to volunteer. I helped welcome attendees, checked them in, and gave out free T-shirts. We had so many volunteers that we split the jobs up so everyone could do something,” Jolene said. “After the welcome station, the MSF team asked us to sit at a table and be available to help out as needed during the program. We handed out giveaway items when needed and held signs during one portion where they divided the room into groups.”

But while you’re volunteering, you’re also able to tune in to the speakers.

“The event was a blast! There are a lot of organizations and businesses who want to get behind military spouses. I also landed a part-time job which was a very unexpected bonus,” Jolene said.

Not only did she attend and volunteer her time, but she walked away with a job. You don’t even need to have been at your duty station for long. Better yet, if you don’t know anyone, you should definitely sign up. Jolene had recently PCS’d to Fort Bragg and didn’t yet know anyone.

“I joined a handful of Facebook groups before we got to town so I could start to get a feel for the area. Someone posted about MilSpouseFest and raved about a prior event, so I clicked on the link. It actually took me visiting the signup page three times before I finally committed to registering for the event! I wanted to go, but it was one week after we arrived and I just didn’t know what to expect and I didn’t know a single person,” Jolene said. “As I filled out the form, I found a ‘volunteer’ option instead of a regular attendee. I jumped at that opportunity. I figured that with a job to do, I could at least feel a little more confident in a new place and attend the event more comfortably even without knowing anyone.”

If you’re local to Fort Benning, do yourself a favor and attend this event. I highly doubt you will walk away from it with regrets. If you aren’t local, keep checking back with MilSpouseFest to see if an event is coming your way. Upcoming locations include Honolulu, Norfolk, Offutt Air Force Base, Colorado Springs, and San Diego.

“Milspouses should attend MSF because it’s a fantastic event filled with positive, inspiring women,” Jolene said. “It’s a great way to expand your network, have a little fun, and even have a chance to win some prizes.”

Sarah Peachey is a journalist from southern Pennsylvania currently living in Europe. Previous adventures sent her to the Mid-Atlantic, Deep South and Southwest. She lives with her husband, three children and one very spoiled Dachshund. She began a career in journalism with The Fort Polk Guardian, an Army installation newspaper, winning three state awards for her work. She has written for The Homefront United Network and consults for MilitaryOneClick. She is the writer behind #MilitaryVotesMatter, the sister site of MilitaryOneClick that was launched to keep service members and their families informed of their impact on the election and what the candidates would do for the military and those who serve it. When not writing for military support sites, she writes about parenting, travel, books and politics on her personal blog, Peachey Keen. She has a passion for politics and fiery debate. She considers herself a bookworm, pianist, wine enthusiast and crossword addict.