By Amy Bushatz, Military.com and Spousebuzz.com An auction of household goods shipments abandoned in a Virginia moving company’s warehouse has been... 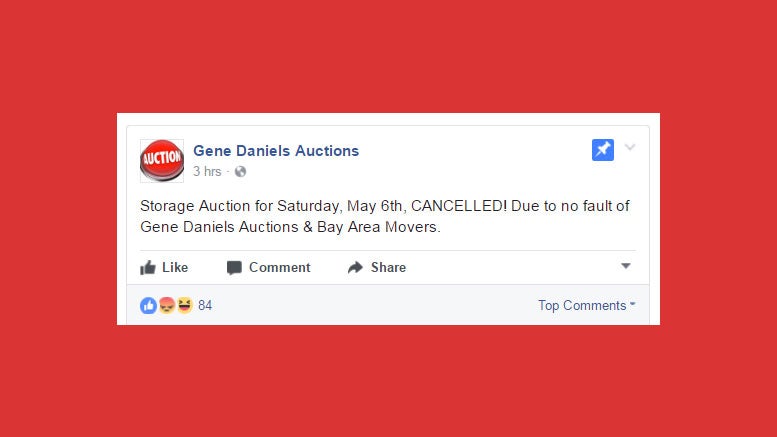 An auction of household goods shipments abandoned in a Virginia moving company’s warehouse has been canceled following an internet firestorm over the plan.

Social media exploded May 3 over an advertisement from the Gene Daniel’s Auction Company announcing a sale of 105 containers and over 78,000 lbs of  what they called “Unclaimed Shipments from Overseas” belonging to military members and stored at Bay Area Movers, Inc. On their website they referred to the contents as “treasures.”

The reaction from military families, service members and veterans was swift and powerful. The ad made it sound like these containers were simply lost in storage and never delivered. Hundreds of comments poured in wondering why military family belongings were being sold at auction — and whether or not those who owned them were given a chance to claim their stuff.

And truly, it sounded terrible. We’ve all lost stuff. We all have been the ones who have had entire crates go missing — or know someone who has. What if it was OUR stuff sitting in storage and getting auctioned? What if this was just another example of bad moving ju-ju without a happy ending?

And the photos the auction site posted made it worse. Internet sleuths zoomed in on them, revealing that some contained delivery dates for 2017 — a far cry from what an official at the veteran owned Bay Area Movers Inc. told Military.com was actually the situation: that these were items that had been abandoned in temporary storage after the 90-days the government pays for it had run out, some for decades, and that attempts to contact the owners had been unsuccessful.

The woman whose items were pictured and labeled 2017, however, contacted the company and confirmed that her things were not up for auction at all — and then posted her comments in a Facebook group.

Still, the auction was canceled thanks to the firestorm. “Storage Auction for Saturday, May 6th, CANCELLED! Due to no fault of Gene Daniels Auctions & Bay Area Movers,” the auction site posted on their Facebook page.

Jean McRrae, who owns the business with her veteran husband, said some of the items had been in storage since the early 1990s. She said although many storage and moving companies hold auctions for unpaid-for items annually, this was to be their first since opening in 1984 — and that they simply didn’t want to get rid of stuff that someone may come back for. However, with space a commodity they had decided they needed to clear out the really old stuff to make room for the new.

Officials with the military Surface Deployment and Distribution Command (SDDC), which manages the military move system, said they have worked with Bay Area Movers to confirm that none of the goods that had been planned for the auction are items that were lost or misplaced instead of abandoned.

“We’ve been able to verify that all 47 shipments were placed in temporary storage between the years 1995 and 2009,” said Fred Rice, an SDDC spokesman. “This is not, in any stretch of the imagination, items belonging to service members who are out there doing their thing.”

Rice said the companies’ primary mistake was in the advertisement, including using photos of crates that were not to be a part of the sale.

“They followed the correct procedures, however they made bad decisions in the way that they advertised their auction by using photographs that did not depict the actual items to be auctioned,” he said.