A new public history exhibit highlighting the Washington Navy Yard’s past was officially opened during a June 30 ceremony at... 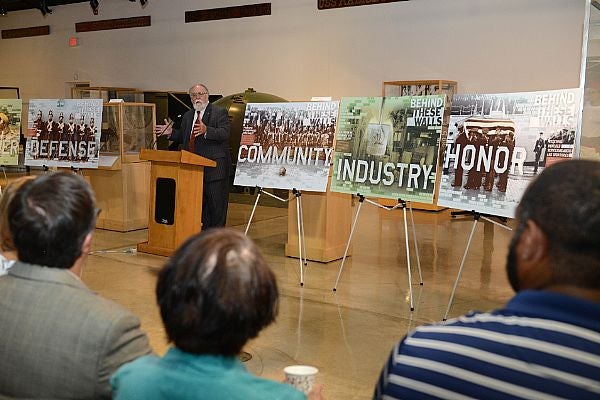 A new public history exhibit highlighting the Washington Navy Yard’s past was officially opened during a June 30 ceremony at the Cold War Gallery of the National Museum of the U.S. Navy.

The exhibit, entitled “Behind These Walls,” features eleven 9′ by 7′ historical photographs displayed on the Washington Navy Yard’s historic perimeter wall along 11th and M Streets, SE.

“The title for the panel series, ‘Behind These Walls’ came from me, because as a kid coming to the museum in the 1960s I always wondered what indeed did happen behind these walls,” said Jim Bruns, Navy Museum director and a member of the exhibit committee.

“The Capitol Riverfront BID is proud to have developed the Behind These Walls exhibit with Naval Support Activity Washington and Naval History and Heritage Command,” said Michael Stevens, Capitol Riverfront BID president. “Through historic photographs and explanatory narrative, the larger than life photo panels animate and activate the historic wall while telling the incredible story of the Navy and its influence on the city, the nation and the world.”

“The Behind These Walls displays and increased understanding that they help foster between the local community and the Washington Navy Yard is indicative of many things we are doing to partner in pursuit of shared interests with our neighbors,” said Capt. Jeff Draeger, NSAW commanding officer.”

The selected photographs and texts, provided by NHHC, highlight moments of both national and local importance that have occurred on the Washington Navy Yard, such as the Yard’s pivotal role in the Civil War, as a testing site for military innovation, and engagement with the surrounding community.

“The Washington Navy Yard and its personnel have been innovators and leaders in our Capitol Riverfront neighborhood since the Navy Yard was founded in 1799, and this exhibit celebrates that history and brings it to life through a series of wonderful photographs,” added Stevens. “The historic wall has become a very cool palette for telling that story, and should intrigue and educate passersby for years to come.”

According to Bruns, his staff chose from nearly 30,000 Navy-related images, many pertaining to the Washington Navy Yard, when deciding which images to include in the exhibit.

“If a picture is indeed worth a thousand words, then with these panels we are now able to provide volumes of information about the scientific, diplomatic and technological achievements that have taken place at the Washington Navy Yard,” said Jim Bruns.

With each panel centering on the theme of honor and industry the public will get a glimpse of the remarkable things that have taken place behind the Navy Yard’s high walls. The committee also hopes to educate and encourage passers-by to consider taking a “deeper drink,” by going on-line or to the library to discover even more little known facts about the Washington Navy Yard.

The exhibit on the exterior of the Yard is open to the public and will run for two years.