A big federal grant will soon help a national military family organization expand a reading program to connect troops and... 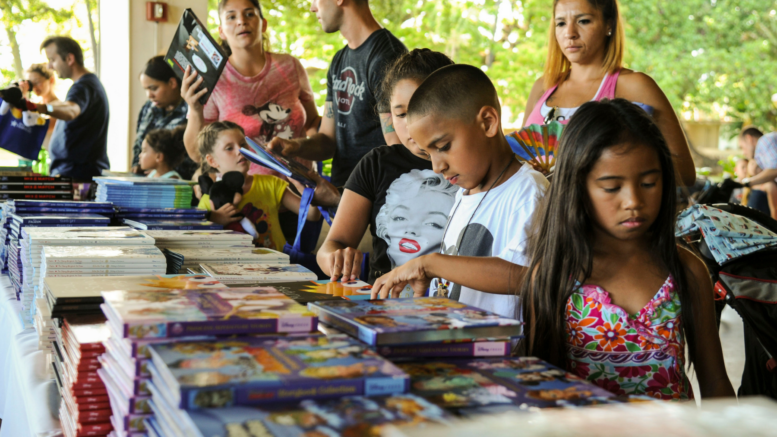 A big federal grant will soon help a national military family organization expand a reading program to connect troops and families with their civilian neighbors.

Blue Star Families’ Books on Bases program has long given out free books to military kids around activities, and hosted book club meet-ups for both kids and adults. Now a new grant from the National Endowment for the Humanities will allow the organization to grow that program over the next three years into civilian communities.

The $448,100 grant, which Blue Star Families will match from its own budget, will add to Books on Bases’ two new programs modeled on those operated elsewhere through NEH funding. The new programs are known as START, or Serving, Thriving and Reading Together.

Focusing on two different demographics, kids and adults, START is designed to bring communities together around reading and literacy at local libraries or community centers. The Blue Star Families START programs will look to connect military members with the community outside the gate, officials said.

“This is big … It’s really about creating community, and it’s nice that we’re going into this together” with NEH, said Suzi Guardia, who manages neighbor engagement for Blue Star Families. “We wanted to take Books on Bases, and take it to the next level. We’re going to bring military families and civilian families together so people can really get a sense of each other.”

Rather than reinvent the wheel to make that happen, Guardia said following NEH’s existing work was key. Now the organization will pilot its new program at one still undecided location.  Eventually it will expand to multiple START groups centered on children and then, finally, a program for adults. Officials said they’ll be able to reach 1,000 participants at about 15 Blue Star Families chapter locations.

Officials with the NEH said the grant award is a natural fit, because it meshes with other NEH programs that specifically reach out to veteran and military members. They said they hope the groups can foster an organic discussion and help bridge that infamous military and civilian divide that we are constantly trying to conquer.

“Bringing those two groups together in a neighborly atmosphere that focuses on books and literature and is a way to engage each other on universal themes and connect … that’s an entryway to discuss things you have in common and form a stronger community bond,” said Paula Wasley, an NEH spokesperson.

So how can you get involved with the new START Blue Star Families programs? For now you’ll need to stay tuned. The organization plans to launch first at a single location to test how the groups can operate, and then expand from there.