Birds of a feather: brother promotes sister via VTC 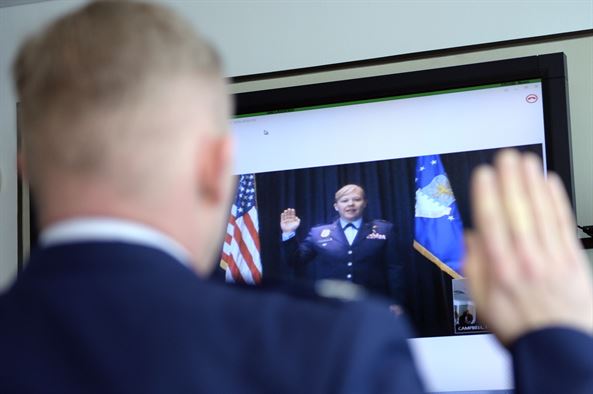 The video stream stuttered, lagged and occasionally froze, but it ended with Col. Theresa Goodman looking into a webcam and rendering a perfectly clear salute to her brother stationed 5,296 miles away from her location, Kirtland Air Force Base, New Mexico. Col. Joseph McFall, the 52nd Fighter Wing commander here, promoted his sister, who he refers to as Tess, to the rank of colonel via video teleconferencing technology, May 15, 2017. As soon as her new rank took effect, Goodman made sure to jokingly let her older brother know it would be the last salute she would have to give him for a while.

The two siblings serve for the Air Force, and now hold the same rank, but their individual journeys to this point are vastly different. McFall, who has more than 2,500 flying hours in the F-16 Fighting Falcon, knew from an early age he wanted to be a pilot.

“My dad flew KC-135s in Vietnam,” McFall said. “When he got out of the Air Force, he got his aircraft maintenance license, bought a small plane and fixed it up. So, some of the first memories I have are flying with him. He’d take me to airshows all the time and we’d watch the Thunderbirds and the fighters streak through the sky. I just knew from really young age that I wanted to join the Air Force.”

For Goodman, the decision to join came from a different passion.

“My sister had some medical issues when she was young,” McFall said. “She felt the doctors treated her clinically instead of as a person. So, she decided she was going to grow up to be a doctor who was family-focused.”

In college, Goodman earned an ROTC scholarship and was then selected by the Uniform Services School of Medicine. This accomplishment led to her eventually fulfilling her dream as an Air Force flight surgeon. She’s currently serving at the Air Force Inspection Agency headquarters as a medical inspector.

Despite taking a similar path in life, the virtual promotion ceremony sums up the last 20 years of their careers, – separated.

“The closest we’ve been stationed was about a 4-hour drive apart, and that wasn’t even for a year,” McFall said. “We miss each other all the time, so she asked me if there was any way I could make it to her ceremony.”

Unfortunately, it wasn’t possible for him to be there, but they came up with an idea almost as good.

That conversation led to friends and family gathering in two separate conference rooms, continents apart, to share the same moment together.

“The idea allowed my whole family to be together when it would’ve been impossible to do so otherwise,” Goodman said. “It was really fantastic.”

McFall shared jokes and feel-good stories with both crowds, but he also told a story about a day that changed lives and brought his family closer together, Sept. 11, 2001.

“Tess was at Andrews Air Force Base doing her residency, and they were receiving a lot of the victims from the pentagon,” McFall said. “Her husband was an executive officer to an admiral at the Pentagon and was about 300 feet away from where the plane hit. At the same time, my dad, who was a commercial airline pilot, was flying. It was a crazy day trying to figure out if everyone was okay.”

That day changed their relationship forever.

“I’m a really competitive guy, but since then, it’s not a competition,” he said. “It’s about supporting each other. We’re so proud of each other and cheer each other on. I don’t think either of us expected to be where we are today.”

After the Air Force song played and the ceremony concluded, the two colonels took a few moments to chat through the video conference and just be siblings.

“These are the moments in your life that you never expected to happen, but they’re probably some of the coolest ones,” McFall said.