Bookoo.com brings online yard sales to a base near you

MilitaryOneClick wants to know: Do you Bookoo? By Danielle Gamiz Staff Writer When my friend Becci and her family of... 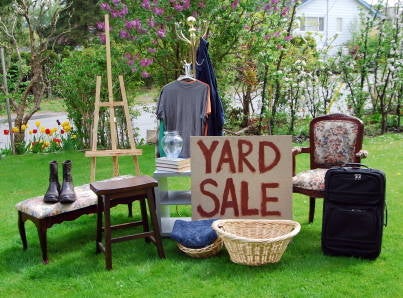 MilitaryOneClick wants to know: Do you Bookoo?

When my friend Becci and her family of four moved from an 850-square-foot beachside bungalow in San Diego to a 2,500 central-entrance colonial in Jacksonville, N.C., she had one central mission: Buy more furniture.

And, like many military families, her Navy brood was looking at another permanent change of station in less than three years’ time, so she didn’t want to spend a lot on furnishing their temporary rental.

That’s when she turned to Bookoo.com — a network of local online yard sales for hundreds of communities around the world, many of them linked to military installations.

In a matter of months, Becci’s home was furnished with inexpensive, second-hand items that she wouldn’t mind re-selling should she ever have to downsize upon future military relocations.

Dining room table? Check. Desk and shelving unit for the office? Check. An above-ground pool for the backyard and a ride-in Barbie jeep for the girls to zip around in on the driveway? Check and check.

She even bought a car and a boat through Bookoo.

According to Adam Allgaier, who co-founded Bookoo with his brother Austin in a Houston suburb nine years ago, the business didn’t initially aim to serve military communities.

That piece evolved, after a loyal costumer moved from the Houston area to Willmington, N.C., and wanted Bookoo to open a site in their new community.

Camp Lejeune quickly became one of Bookoo’s most popular sites, along with places like Camp Pendleton in San Diego, Aviano, Italy, Ramstein, Germany and Misawa Air Force Base in Japan.

“We never originally targeted the military area,” Allgaier said in a recent phone interview. “That just kind of happened naturally.”

The military is very mobile, moving every two to three years, he said, so when the military moved around, Bookoo followed.

Bookoo started around the same time as Craigslist, but the two sites focused on different geographical regions in the beginning.

The two sites have since expanded and operate in a very similar fashion: Sellers post information about items they wish to sell and buyers click through the postings and buy directly from the sellers.

In order to start a new site, potential users can send a request through the company’s Web site. Company administrators then gauge interest in that area before adding a new site.

“For a community to be successful it needs a community of buyers and sellers,” Allgaier said.

Allgaier said the company hopes to build customer loyalty not only for its accessibility and ease of use, but also for its reputation of doing good things in the communities it serves.

Allgaier said he heard a few years ago about someone posting a “want ad” for a kidney transplant on Bookoo, where the patient ultimately found a donor.

Danielle Gamiz is a contributing writer for MilitaryOneClick. Following more than a decade of covering local issues for a variety of daily newspapers, Danielle shifted her reporting career from the newsroom to the family room, where she currently blogs about her life as a mom and Navy wife.

Danielle lives in northern Virginia with her husband, Nick, and their three small children. You can find her at (http://oursugarandsnails.blogspot.com).