Have you successfully breastfed your baby while serving in the military? 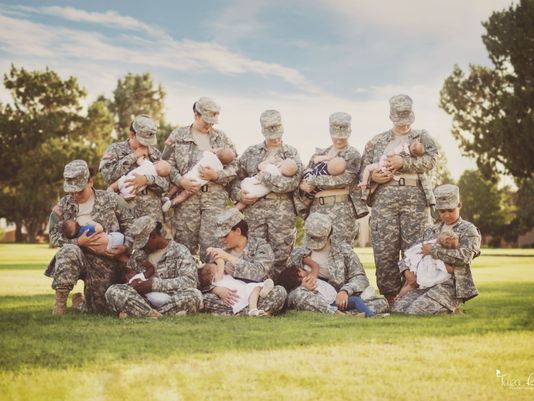 Breastfeeding has been around since the dawn of time. It is the recommended feeding choice by the Centers for Disease Control and Prevention for the first year. The World Health Organization recommends breastfeeding until age 2. While either formula or breastfeeding is an acceptable choice, breastfeeding often requires an additional set of support to allow for success.

In mid-September 2015, a photo of 10 soldiers breastfeeding while in uniform on Fort Bliss went viral. Comments on the photos ranged from acceptance and applause, to chastising and chiding. It all started with Tara Ruby, a local photographer, who invited breastfeeding mothers to a photo shoot. The plan was to hang the photos in the 1st Armored Division Headquarters’ nursing room, called the Butterfly Room, a room specifically for pumping and breastfeeding mothers. Ruby recognized that this was not meant to be a political stance; after all, the photos were for a room only seen by breastfeeding mothers. The idea was support.

At the end of September 2015, the Army had said it was revising its breastfeeding policy.

The two events put breastfeeding at the center of a major debate, with mixed feelings. While mothers often make the choice to breastfeed or formula feed, both styles of feeding deserve support from friends, family and even employers. Support is especially necessary for breastfeeding mothers since they require time during a workday to express milk.

Breastfeeding is a biological action, not much different than using the restroom. While it can become painful to wait to use the restroom, the same happens when breastfeeding. Waiting causes painful engorgement that can lead to nursing troubles because of being overly full or medical issues like mastitis and clogged ducts. Mothers frequently express milk every 3-4 hours, mimicking the average infant feeding times. Missing even one pumping session can decrease milk production.

Each branch has drafted a set of services-wide breastfeeding policies and the content of each varies. The Army released the following directives on Sept. 30 that affect active-duty, National Guard and Reserve service members:

Robyn Roche-Paull, International Board Certified Lactation Consultant, Navy veteran, author and Executive Director of “Breastfeeding in Combat Boots,” believes the policy is a good first step, but it needs to be more specific. “I understand why the policy remains vague, so that the commander and service member can work out what is best, but this isn’t a perfect world,” Roche-Paull said. “It could play out as ‘readiness takes precedence.’”

Here are the concerns Roche-Paull has with the Army policy:

The requirements for the most basic nursing rooms would include a lock (preferably one that locks from the inside), an electrical outlet in the room, access to water and a refrigerator for storage while at work.

Some people question why mothers need a private space for pumping when mother’s often don’t seek a private space when physically breastfeeding their babies. “Pumping is much higher exposure than breastfeeding. The uniform blouse/coat must be unzipped, the undershirt pulled up, the nursing bra unhooked and the pump parts are clear, so there’s no hiding anything,” Roche-Paull said.

An ideal nursing room would include all of the basic requirements, Roche-Paull said, but also a mirror to ensure the uniform is squared away, tables and chairs, a pump already in the room (mothers only provide parts), a sink in the room, pamphlets on breastfeeding and even photos of breastfeeding mothers, like the Fort Bliss photo.

Roche-Paull understands what it means to be a nursing mom — she served in the United States Navy as an aircraft mechanic. She was the only female employee in the hangar, which had no privacy, she said. Roche-Paull worked with her commander to create her own policy. Years after her Navy service, Roche-Paull, who worked (and is still working) as a lactation consultant at Naval Medical Center Portsmouth in Virginia, realized that her problems with breastfeeding in uniform were still common. In 2009, she began writing “Breastfeeding in Combat Boots” to help mother breastfeeding mothers. She also started a Facebook page of the same name as she was writing, which is still in operation today. Her website also exists to “advocate, inform and support all active duty, guard and reserve personnel who are breastfeeding while serving in the military,” supplying information for breastfeeding mothers on how to pump at work, in the field, on temporary duty and more.

“There’s this idea that breastfeeding is unprofessional, degrading and dirty, but I don’t understand that reaction. [The Fort Bliss nursing photo] is what we need to see,” Roche-Paull said. “I believe it’s a beautiful picture and shows women that their lives as service members and mothers are compatible. They are able to be nurturing their children, but still serving their country.”

Paul Prince, a spokesman with the Army’s personnel branch (G1) said that the establishment of a pumping station in a bathroom is within federal law, according to the Army Times. Section 4207 of the Affordable Care Act, which became effective on March 23, 2010 and amended the Fair Labor Standards Act of 1938, says: