Commissary Shoppers May Have to Buy Groceries Elsewhere

Originally posted on 05 Dec 2012 from our friends at My Military Savings Originally, this article was going to be... 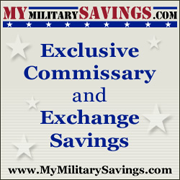 Originally, this article was going to be about the possible Commissary Online Grocery Orders and Curbside Pickup, but I’m not so sure about that possibility anymore …

Love shopping at the Commissary and saving more money than you would at off-post grocers? Well, your wallet may no longer have a choice if Senator Tom Coburn gets his way.

Sen. Coburn has proposed that Military Commissaries be “shut down to save billions of dollars.” Coburn’s report suggests simply raising military pay by around $400 a year and making military shoppers buy groceries elsewhere. “By getting the Department of Defense out of the grocery business here in the United States, Congress could increase military pay across the board and allow military members to shop at the stores of their choice…and still save $9.1 billion over ten years.”

Mind you, $400 a year is only $33.33 more per month. This isn’t going to go over so well with the military community who rely on the Commissary to save money whilst on an already tight monthly budget.
With coupons paired with sales, those who normally would spend $400-$600 per month on groceries might pay only $100 at the Commissary (it is possible, but takes a lot of effort). However, there are still thousands of families who do not use coupons for whatever reason and still depend on their Commissary benefit to help ease the monetary burden. Let’s face it – our soldiers do not get paid enough as it is, yet leave their families for 9-12 months at a time, several times throughout their military careers, putting their lives on the line fighting for our country, and now Congress wants to strip us of saving money, thinking that an extra $33 per month will suffice for our service members sacrifice. It’s scary to think of what could be next. Remember the Military Pay Freeze Proposal in the Spring of 2011?
While military families can still save money and get great deals off-post, do you think it’s really necessary to shut down the Commissary, that’s already rated a top benefit alongside Tricare?
For more information, please check out http://www.saveourbenefit.org
Thanks, Coupons In the News