Did you know copying a government ID is illegal?

By Katie Lange, DoD News, Defense Media Activity Have you ever been asked by a business if they could photocopy your... 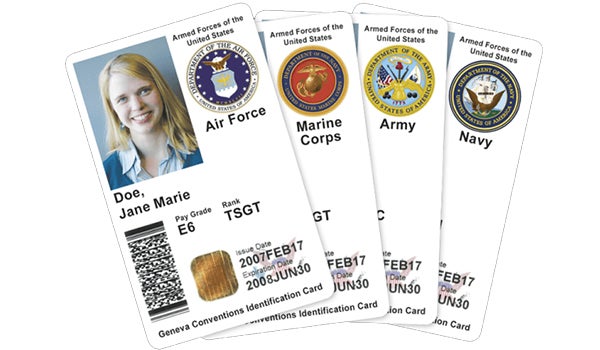 Have you ever been asked by a business if they could photocopy your identification? Chances are that if you’ve rented a hotel, car or apartment, the answer is yes.

But don’t hand them your common access card or military identification card, because copying it is against the law.

A lot of military members, their families and Defense Department employees don’t know this, but photocopying any U.S. government identification is a violation of Title 18, US Code Part I, Chapter 33, Section 701.

The law reads, “Whoever manufactures, sells, or possesses any badge, identification card or other insignia of the design prescribed by the head of any department or agency of the United States for use by any officer or employee thereof, or any colorable imitation thereof, or photographs, prints, or in any other manner makes or executes any engraving, photograph, print, or impression in the likeness of any such badge, identification card, or other insignia, or any colorable imitation thereof, except as authorized under regulations made pursuant to law, shall be fined under this title or imprisoned not more than six months, or both.”

Commercial establishment can ask to see your card to verify military affiliation or to provide government rates for services, but they can’t photocopy it. So if they ask to do so, tell them no. Give them a state driver’s license or other form of photo identification instead.

Photocopied cards might be used for counterfeiting purposes, with no real safeguards against it. Since criminals and terrorists value U.S. government IDs when they’re trying to plan acts against the U.S. military, it’s best to not give them that chance.

This law does NOT apply to medical establishments like hospitals and doctor’s offices who are allowed to make a copy for filing insurance claims. It also doesn’t apply to other government agencies that are using the copied ID to perform official government business.