By Heather Sweeney, Military.com Walt Disney World will always hold a special place in the heart of military spouse Allie.... 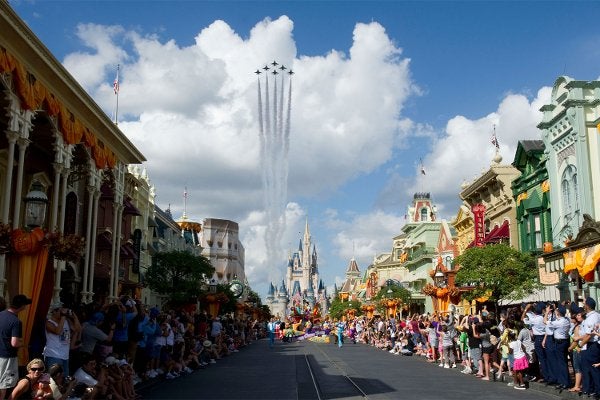 Walt Disney World will always hold a special place in the heart of military spouse Allie. After all, it’s not every day that your future husband gets down on one knee to propose marriage during the EPCOT fireworks show.

But Allie, a former intern at Innoventions in EPCOT, also loves Disney because of how patriotic and military-friendly they are. And if you’ve ever taken advantage of the great discounts Disney offers military families, you’ll agree.

Thinking about booking a Disney vacation? Before you go, check out the following Disney discounts you can get as well as a few things to keep in mind. (The first thing to keep in mind is to have your military ID. You’ll need a valid ID to redeem all of these deals.)

You can purchase these tickets at your military installations’ ticket office or Shades of Green (see below).

Keep in mind: These tickets can’t be combined with other discounts or promotions, they aren’t valid on certain blockout dates, and they’re limited to six tickets.

Keep in mind: The number of rooms at the reduced rate is limited, and minimum stay requirements may apply. Just like ticket sales, the discounts on resort rooms are also subject to blockout dates.

Another perk of being a Disney Resort hotel guest is Extra Magic Hours. This allows you early admission to select attractions, stores, entertainment and restaurants during each day of your hotel stay. That’s one extra hour of fun before the park opens to the general public, which is a great way to enjoy a slower pace and shorter lines.

Keep in mind: Each park has an Extra Magic Hour schedule. That means this perk isn’t applicable every day of the week or at every park.

Another option for lodging is Shades of Green. Shades of Green is an Armed Forces Recreation Center (AFRC) in Orlando, Florida. It is a military-owned resort located within Walt Disney World that offers affordable military room rates and discounted tickets for all Disney World venues. It also offers complimentary bus transportation to the Disney World Theme parks and to the Transportation and Ticket Center, as well as the Extra Magic Hours benefit.

Keep in mind: The discounts are always changing, so visit their website frequently to look for updates.