New Prototype Hand-cycle to be Revealed at Army Navy Game 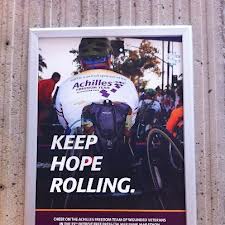 Chevrolet and GM Military Discount recognized a need for improved hand-crank bicycles as the existing ones break easily and often.  Throughout 2012, we sponsored teams of senior engineering students at Michigan Technological University (as their Capstone project) to engineer a more superior racing hand-cycle.  The winning prototype of this ‘better’ engineered racing hand-cycle will be revealed at this year’s Army-Navy game during our press conference.

The NEW prototype will be revealed on the field during the first quarter of the game!!!

Chevrolet salutes America’s heroes, as it has for nearly 100 years.  Chevrolet gives back to wounded veterans athletes what it does best: best in class engineering, providing the promise of the open road, and the freedom to get there.

**Chevrolet is the official vehicle of the Army/Navy Game. Look for us on-site in the Fan Fest area at Lincoln Financial Field on game day for free gear and hot chocolate!