“As I take a step in to the hangar bay of the aircraft carrier USS Nimitz (CVN 68), my glasses... 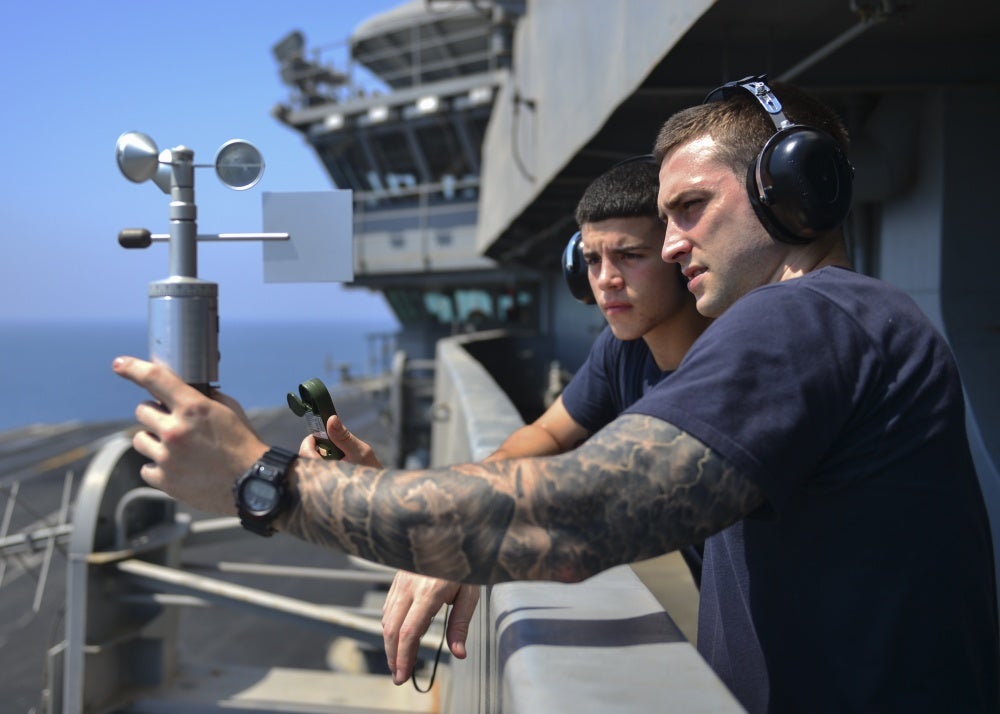 “As I take a step in to the hangar bay of the aircraft carrier USS Nimitz (CVN 68), my glasses and camera lens fog up instantaneously. Glancing at the deck, I see that the non-skid is wet, possibly from the sweat of hard-working Sailors and Marines working atop the multimillion dollar aircraft, or probably just the humidity. As I pace back and forth, waiting for my lens to acclimate from the air conditioned media space to the humidity of the hangar bay, I thought about the other different places on the ship that are hot. Laundry press decks, reactor propulsion spaces, the flight deck, trash rooms; how do these Sailors and Marines beat the heat?”

Working in media, we get to have an in-depth perspective into everything happening on the ship. We get to observe, notice and document.

We entered the inlet of water known as the Arabian Gulf, which for many of us is the first time in our careers we’re exposed to a time of year when the temperature is high, the heat index is hotter and you wear the weather like an unwanted winter coat. Unfortunately, we’re told we haven’t even seen the worst of it yet.

The heat seemed to come overnight. You could see it on faces, notice it in the way everyone was moving and very clearly see, feel and smell it by the sweat that ran down faces and turned our dark blue t-shirts all the darker.

Many of us felt it in the morning as we emerged from our air conditioned berthings. It feels like you are stepping into a suit of heat and you have a halo of humidity around you at all times.

The mess decks were barren that first day. It was far too hot to eat, much less stand in any sort of line to get food.

It was almost as if you could catch eyes with anyone on the ship and know exactly what they were thinking. Soaked and carrying a little extra weight in sweat on their uniforms, everyone walked around that day with a blank stare and a slight bewilderment on their faces about this heat.

I learned a lot about the different places that you can sweat from, which I can assure you is literally every square inch of your body.

I can’t speak for everyone else but I’m sure a lot of our experiences with that first shower in the gulf were similar:

Enter shower. Turn knob quarter turn expecting cold water to wash away the hellish heat from your body. Instead the only thing you feel is water ranging in temperature from lukewarm bath water to hot. You then think to yourself that this must be a mistake. You turn the water off to reset everything and this time you poke the knob ever so slightly keeping it as close as possible to the “C” that indicates cold water until a useable amount is coming from the shower head. Surely it must be cold. Wrong! Warm…

It’s around this time that me and many of my shipmates probably realized that showers out here are, more times than not, only good for pretending to feel clean. As you are getting dressed you realize that between daily showers and constant sweating, you may never be completely dry out here again.

The cool air in the berthing that had been left over and lingering from the night before had dissipated over the course of the day.

That first night I climbed in and out of my rack at least four times making wardrobe changes to find out the sleeping attire that would keep me the coolest at night.

Despite rack curtains being one of the only ways to find privacy on this ship, their use came to a sudden and abrupt halt after entering 5th Fleet. The chance of catching a cold breeze while lying in your rack strongly, in my opinion, outweighs any sense of desire for sleeping behind a heat trapping curtain.

Imagine lying completely still with no activity and still sweating enough to wake up with a layer of sweat on your body and remanence of it on your bedding. Needless to say, I started my second day in need of another one of those lukewarm showers and being reminded that the heat was real and here to stay.

The average heat index has hovered somewhere around the 125-degree mark and is nothing near close to any form of weather many have experienced in the States.

Missing home, land and the amenities of the real world is one thing, but having a challenging time escaping the heat adds an entirely other aspect to being on deployment.

Additionally, No one mentally or physically prepares you for how hot it is actually going to be and feel.

No one mentions how sweaty you are going to be, that your uniform will never be completely dry or how no matter how hard you try the heat and the sweat will always find you when your ship is operating in the Gulf.

It is still bewildering to those who have been warned of the oven-like conditions you will endure. More than likely it’s because it’s almost impossible to fathom just how hot it is unless you have actually experienced it.

Over the last couple weeks, I’ve seen people sweat in ways I didn’t even know existed.

You have the maintainers who work in the hangar bays all day. They can often be seen with a trail of sweat leading from either side of their face, meeting at the chin and dripping or pouring down to their chest.

The crash and salvage Sailors on the flight deck, who wear firefighting suits and stand at the ready should the occasion arise, they take their breaks with their faces red and dripping sweat as they chug water with their hot suits dropped around their ankles.

Then there are the engineering and reactor Sailors that come up from their spaces looking as though they just exited a pool wearing their uniform.

There are the air rates that work on the flight deck and come down wearing jerseys with a visible vest of sweat from where their flotation coat once sat.

Each of the Sailors aboard have their own unique way of sweating and it usually makes it easy to tell what part of the ship they work in; usually.

Everything on the ship sweats. The equipment, the bulkheads, the deck and literally everything else imaginable is always dripping or holding moisture. As for the humans, we are constantly sweating no matter what we do. Whether we are eating, working, cleaning or even sleeping, it’s rare to find anyone without a sweat bead forming somewhere on their body.

As our time in the Gulf continues, these conditions have become more and more bearable. As our bodies acclimate to the heat, the looks of bewilderment have faded, life has returned into the faces of many of the Sailors aboard and operating in the heat is getting easier every day.

Although you can still pass by a space where the heat feels like it takes your breath away, spirits are high aboard Nimitz. Everyone has developed their own rituals and processes for staying cool. Surviving this heat is becoming fathomable, we’re almost too sweaty to comprehend how it’s possible, but it’s fathomable none the less. Because keeping our cool when things get hot is what Nimitz Sailors do best.