Mail call! The short phrase immediately garners excitement among those deployed away from the comforts of home. Chelsea Mandello, who... 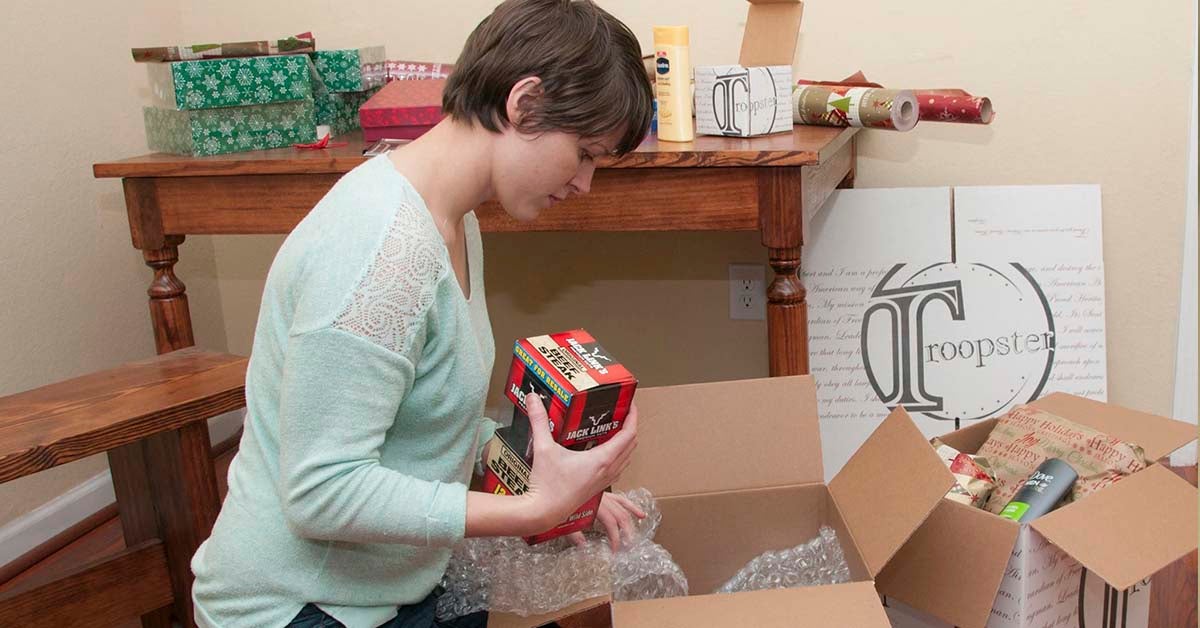 The short phrase immediately garners excitement among those deployed away from the comforts of home. Chelsea Mandello, who has served in the Navy for five years, compared the feeling to that of how kids are on Christmas morning. The sailor knew how much she appreciated getting mail from loved ones so she came up with the idea to make it easier to recreate that moment over and over. In 2015, while still serving on active duty, she launched Troopster – an organization that takes the hassle out of shipping care packages to those deployed.

“What motivated me to take the steps to launch Troopster, while still holding a full-time career, were friends that were being deployed. I had just returned from deployment at the time and wanted to send care packages,” Mandello said. “It was the work of running to the store, trying to find items, then packing the box and trying to remember to go to the post office that really pushed me to get Troopster up and running.”

The organization doesn’t just send a humdrum mixture of stuff in a box–they offer personalized care packages to fit the likes of the service member. Shoppers have a few options: pick individual items to be packed, choose pre-built kits or send gift cards. Pre-built kits range from bath and body kits for him or her to PlayStation-type gamer kits to send ‘love from home.’ So long, vending machine snacks and MREs: Troopster offers much-deserved relief from the typical deployment chow. Mandello said the element of surprise of what could be in the box helps service members escape the usual daily monotony.

“It breaks up the Groundhog Day routine and at the moment you are about to open it, that care package is all that matters,” she said. “The excitement of what it could be flutters around you as you cut the tape and open it up. That feeling alone sometimes is worth it. Similarly, when troops receive a care package while deployed it really helps them remember and be thankful for the family or friend that sent it.” The inspiration to add personalization to the kits came from the types of thoughtful gestures her mother included to her with what she sent. Mandello added that she does have a personal favorite offering on the site called the Health Nut and Protein Pack–personalized with a magazine, movie, photos, and a letter.

Troopster, although in its infancy at just seven months old, has a big goal on the horizon: to ship 500-plus packages out to deployed troops just in time for the holidays. Mandello knows it is a tall order, but recognizes the holidays are a hard time of the year to be separated from family.

She hopes she can make it happen through fundraising efforts: “ … We can’t do it alone. We are hoping to raise $6,000, all of which will go to the troops. We will also hold a Care Packs for Troops volunteer event in which anyone in the area can come and help us pack donation boxes to send off,” she told MilitaryOneClick.

“We’ll be collecting letters from local schools and churches who might be interested in writing letters to the troops to wish them Happy Holidays and give thanks for their service.”

Civilians can also utilize the site as a means to say thank you to those who serve, even if they don’t have a specific person in mind. By making a donation through the Troopster site, unnamed recipients will receive packages while deployed.

Chelsea Mandello is in the process of building a team of volunteers and staff so social media has been integral to getting the word out about the organization’s efforts. Follow Troopster on Facebook. For information on what Troopster offers or to make a donation, visit the site at https://www.troopster.org/.