Erasing the Stigma of Mental Illness

Thank you to our guest blogger and good friend of mine, Amanda Buchner, from SnackWars for sharing her story of... 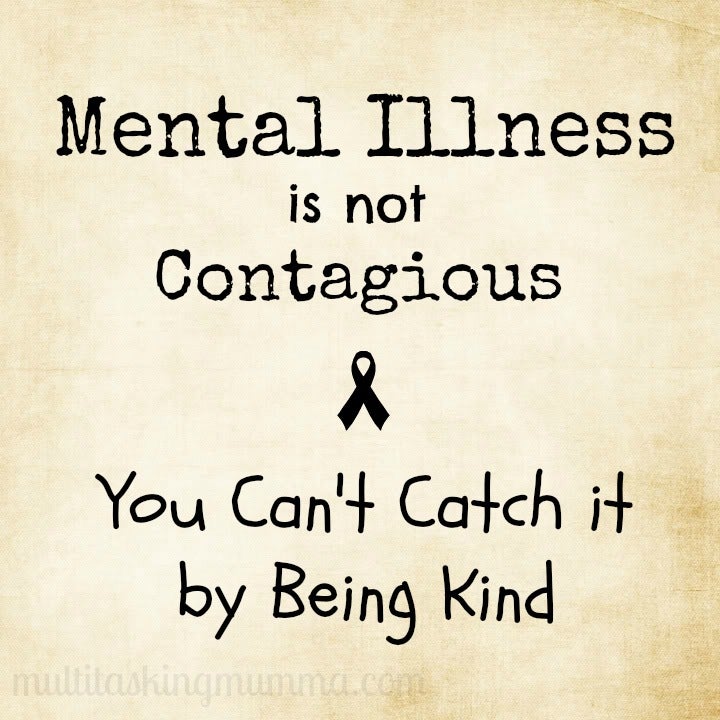 “My anxiety started when I was in elementary school.  I almost never raised my hand in class to answer or ask questions because I was so anxious and fearful that I would be wrong or seem stupid. I remember sitting in class all the way through high school wishing, hoping, praying that the teacher would not call on me. It took me a while to make friends because I was overly anxious about fitting in, a symptom of anxiety. While my mother says that I was shy, after much research I know it was anxiety and not shyness that held me back. I say that because I doubt most people today would think I’m shy. They know me as opinionated, honest, and forthcoming.

My anxiety escalated in middle school when I would wake up in the middle of the night in a panic, feeling as though the walls of my bedroom were closing in around me. My body felt tiny, yet my hands huge. I realize now I was hallucinating to some degree. There was a definite disconnect from reality, which is a symptom of a panic attack. I would have to wake myself up by turning on the light and reading for a while. Eventually the feeling subsided, and I would be able to fall back asleep, but it drained me, and I would be exhausted the next day.

In high school, my anxiety sky rocketed even further. It began hampering my sports and academic performance. The morning of a test I would feel nauseated, my mind racing with test information, yet I couldn’t seem to put it together, and I was so sure I was going to fail.  I was a good student, though, and somehow managed to get good grades despite my constant worry over poor performance. Teachers always described me as a conscientious student, but I needed constant reassurance. Kids with anxiety disorder generally need constant reassurance and seek perfection. I was the same when it came to sports. I strived to be the best and sought the attention of my coaches.  On race days (I was a cross country runner and alpine ski racer), I would  experience a whole gamut of anxiety symptoms that by the time the actual race began, I was nearly drained of all my energy.  Sometimes I wonder how much of a better athlete I might have been had it not been for my anxiety disorder.

By the time I got to college, I was still experiencing these feelings of anxiety, yet I did not have a name for it. Honestly, I just thought I was crazy. I continued to strive for approval. It wasn’t until I was sitting in Psych 101 class when the professor wrote “Generalized Anxiety Disorder” on the board and began listing the symptoms that I thought, “That’s it! That is what I have!” I can’t tell you how enlightening it was to figure it out.  I was not crazy. There was actually something medically wrong with me, and I could get help for it. I began talking with the college guidance counselors and then an outside psychologist to begin confronting this disorder.

Despite a diagnosis and therapy, and occasionally medication (It took me until recently to find one that worked for me), I continued letting the anxiety take charge. There were times in my life I was medication free, but when a major change took place, the anxiety became too difficult to handle with just my cognitive behavioral tools. I graduated with a Master’s of Education in athletic training and passed the Board of Certification exam, yet working in the field caused me great distress. I was in constant fear of causing harm to the student athletes, or of incorrectly assessing their injuries and being sued. I needed constant reassurance and approval from the head athletic trainers with whom I worked.  I would obsess on possible worst case scenarios instead of focusing on the issue at hand. Planning my wedding heightened my anxiety to such a degree that I nearly called it off two months before the date. And when my daughter was six months old, the anxiety and panic I was experiencing was so bad I was forced to stop nursing, sought the guidance of a cognitive behavioral therapist in the area, and finally found medication that worked to subdue my major anxiety. I figured that in order to be a good mother it was important that I was composed and even-keeled, rather than anxious and unbalanced.

Between cognitive behavior therapy and medication I have combated this mental illness to lead a fuller life. While I still experience anxiety and low grade depression on some occasions, sometimes completely out of the blue, I now use behavioral tools, such as yoga and other forms of exercise, muscle relaxation techniques, and deep breathing exercises, to deal with them. The medication seems to make a huge difference, too. I do not shy or back away from things. I face them head on (most of the time) and know that once I push through them, life will be better. Even though my anxiety challenges me, it boosts my confidence when I succeed. I am confident I can prevail over the anxiety.

When I began noticing that both my children experienced signs of anxiety, I did not want them to be judged by it or feel they needed to hide it. I decided it was time to “out” myself publicly and get the word out there about mental illness. So despite the anxiety, I stood up in front about 600 high school students and faculty (We live and work at a boarding school.) and urged everyone to stand up against the stigma of mental illness.

Mental illness is not something you choose. You choose to do something about it. You either get help, don’t get help, or don’t get proper help and turn to other vices to deal with it, which could become another issue.

Mental health issues are vague under the whole medical health category, but it is important that we begin seeing mental health as part of our whole being. We need to support both mind and body, and not separate the two. The brain is part of the whole body; therefore we should not be separating mental health from physical health. Mental illnesses are medical conditions and should be treated medically, not brushed under the rug. We need to work on the language through which to articulate mental health issues so both mental and physical health are respected under the same umbrella of overall medical health. We need to encourage those with mental illness to seek the courage to speak about their illness and seek proper treatment.

Mental illness affects us all in some way or another. Unfortunately, there is this stigma attached to mental illnesses that people who live with mental illnesses are unstable, violent, or dangerous. It’s time we put a stop to this stigma. Let’s talk about it honestly and openly. We can help our friends, family, colleagues, classmates, students by discussing post traumatic stress disorder, suicide, addiction, alcoholism, depression, anxiety disorder, and other mental illnesses. It helps those with a mental illness to not feel alone. There is a light at the end of the dark tunnel. One can live a life filled with love, joy, and accomplishment. It can also be educating to those without mental illnesses. They can learn how to care for, encourage, and support those who are battling mental illness. We need to start a constructive dialogue, work together, and face mental illness with open mindedness and candid communication.”

I am currently medication free and am feeling great despite chronic pain in my neck. I attribute my current state of mental health to the fact I have been exercising on a regular basis. It definitely helps keep both anxiety and depression at bay. Now, if I could find medication to just treat my osteoarthritis!

Amanda is a stay at home mom getting ready to embark on the next journey in her life….becoming a wellness coach. She has a B.A. in psychology and an M.Ed. in Athletic Training. Her hopes are to combine the two and set out on an adventure coaching people in healthy living.