Ever want to be a soldier? Some VIPs get the chance for a day

Imagine hopping into a Black Hawk helicopter, suiting up for a raid, shooting some guns and being a soldier for... 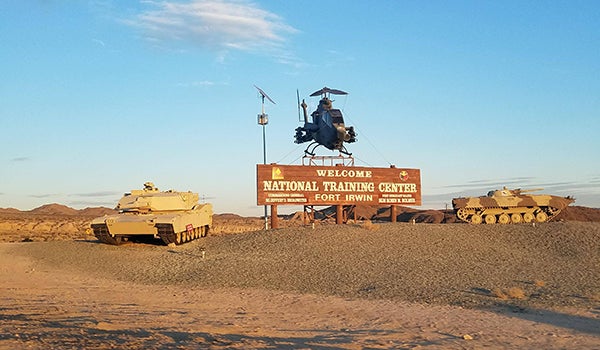 Imagine hopping into a Black Hawk helicopter, suiting up for a raid, shooting some guns and being a soldier for a day without having to actually enlist. That would be pretty cool, right?

Some special guests are getting to immerse themselves in that life this weekend at remote Fort Irwin, California. From sun-up to sun-down, actors, heads of talent agencies and leaders from business giants like Lucas Oil and the NFL Network will no longer be themselves – they’ll be privates, learning all there is to know about Army life.

Fort Irwin is out in California’s Mojave Desert – a place that could double for Afghanistan or Iraq any day. Because of that, it’s where the National Training Center is located, a place where soldiers, sailors, airmen and Marines across the world can get tough, real-life training to hone their warrior skills.

Fort Irwin has been doing these VIP tours twice a year for about six years. It’s a way for business leaders and industry giants to get to know the real side of the military – more than what they hear about in the news and see on TV – and find out how veterans can fit back into civilian life after their service.

What the VIPs take away from the experience can often be very different from their assumptions of military life beforehand, and that’s important in helping to bridge the military-civilian divide.

What the VIPs experience

So what, exactly, will these newly minted “privates” be doing during this day-long mission?

First, they’ll catch a ride on a Black Hawk and get some sweeping views of Los Angeles before dropping down into the desert to get their day started. Who wouldn’t want to do that? The VIP guests will then head to the National Training Center, where they’ll be sworn in as soldiers for the day.

The group will get to watch as a massive fictional town turns into an Arab marketplace for the day. They’ll  check out some sights, sounds and smells that service members might encounter before watching soldiers with the Army’s elite Black Horse Regiment do some training, complete with explosions and casualties.

Next is lunch, when they test out those infamous Meals, Ready to Eat (MREs).

Then the real fun begins. The “privates” will get more hands-on, suiting up in full Army gear, shooting guns and exploring tanks. They’ll also have some serious discussions with military leaders, soldiers and their spouses about what life is really like in the military.