Fear the Goat: Portrait of a Navy Family

It's that time of year again! 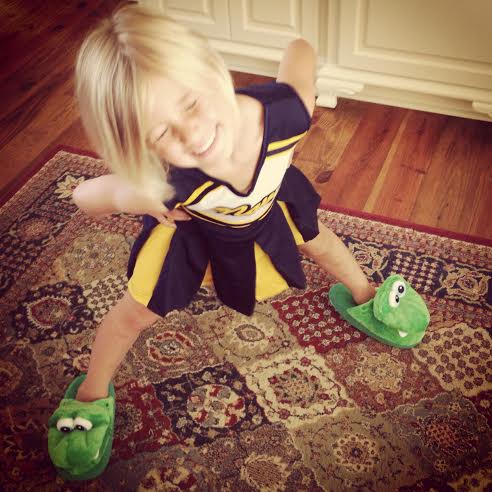 Thank you to Emily Sovich for this fabulous Army/Navy blog! My husband loses his mind once a year.

It starts innocently enough, sometime in mid-September, and the symptoms set in slowly. The temperature starts to drop, the leaves start to change, and blue-and-gold football players start rushing across the fields that now flicker endlessly through my living room. If it’s cold enough, Chris puts on a sweatshirt. He sits on the couch, opens a Hoegaarden, and smiles at everybody around him. It’s football season.

By December though, he starts speaking a foreign language. He starts using phrases like ‘run oriented’ and ‘sophomore quarterback’ and ‘undersized players’ in casual conversations. He claps his hands and says ‘Let’s Go!’ with more inflections than there are meanings. Sometimes he groans and I rush into the room, fearing some terrible bodily injury, and he’ll say, “They just can’t stop this guy, Em!”

“They can’t play like this and expect to beat Army.” This is the reason my eight-year-old tells her friends to Fear the Goat. This is the reason my five-year-old scowls at mules. As a family, we’re contractually required to hate Army. I can’t complain though. After all, I’ve known about this obligation since the beginning. When Chris and I met he was a former defensive end with broad shoulders and a bad knee, a junior at the Naval Academy. On our first official date, he took me to Philadelphia for the 100th Anniversary of Army-Navy. He was wearing a black overcoat and his eyes were as blue as the December sky, and when USNA’s entire student body started singing Navy Blue and Gold to celebrate their 19-9 win over Army I remember these two older women nudged each other and smiled up at him. I smiled up at him, too. He seemed so full of patriotism and passion, hope and service and sacrifice, and for the first time in my life I found myself feeling proprietary about somebody. He just seemed so sincere. So when he looked down at me, with joy shining out of every pore of his skin, I remember I expected him to say something profound. I expected him to tell me something True about himself, to give me some kind of an Answer, and looking back at it now, in a way, I guess he did.

“Next year, I hope we crush them again.” he grinned.

During her years as a military spouse, Emily Sovich has traveled through five continents and approximately thirty countries. She’s climbed the Great Wall of China, gone swimming with sharks in Australia, and ridden a camel around the pyramids in Egypt. She loves culture and adventure, but she’s happiest at home with a book in her hand, a child in her lap, and a cup of coffee on her bedside table.

For everything Army/Navy, please see our Army Navy Game page.