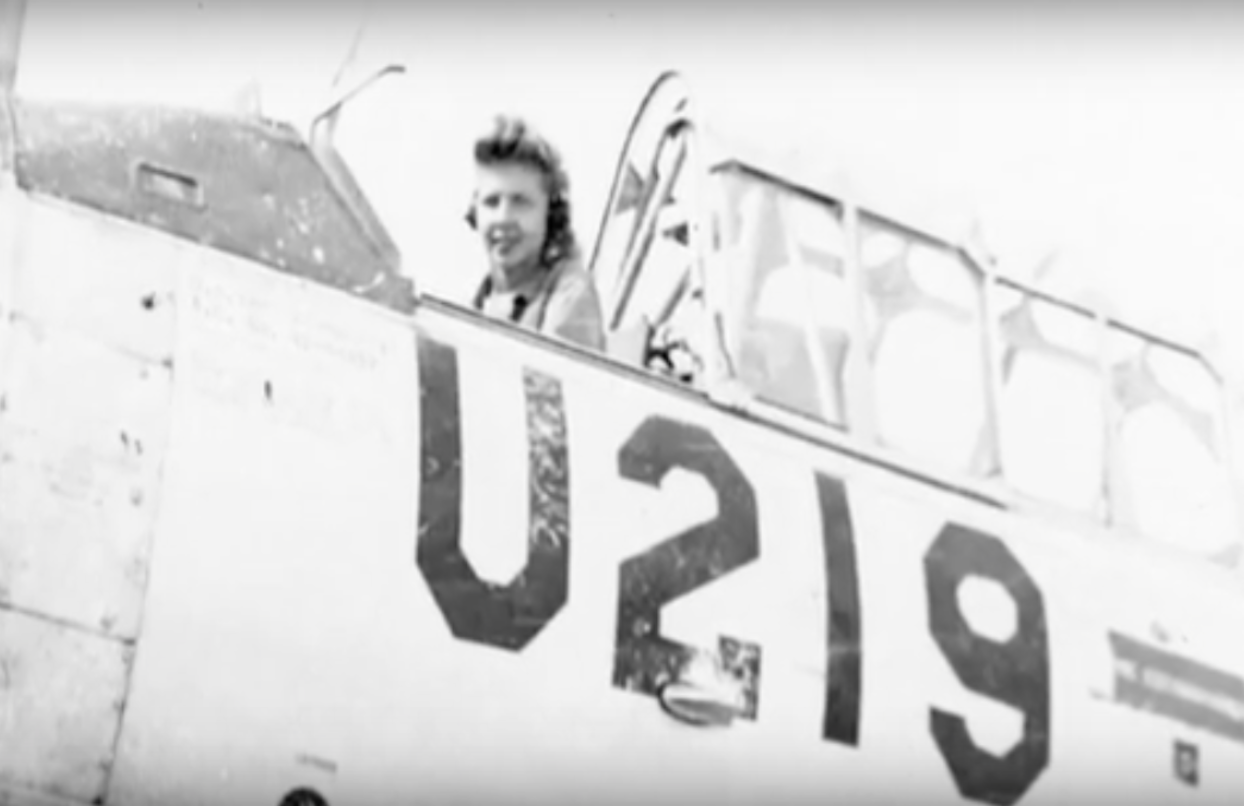 Wyall was one of 25,000 who applied for the WASP program and one of only 1,074 who graduated from it. The purpose was to remedy the shortage of male pilots for combat service and duties.  Collectively, the women flew over 60 million miles in military aircraft of all kinds: transporting planes, training male pilots and towing targets for anti-aircraft artillery practice.

Their training periods lasted 4-7 months. WASP was a paramilitary program – the women were neither paid, nor received military benefits. If admitted into the program, they had to foot the bill for their own travel, uniforms, meals, and lodging.  These conditions, however, did not thwart the Fly Girls’ desire to serve. In her book “WWII Legacies: Stories of Northeast Indiana Veterans”  author Kayleen Reusser cited one of her conversations with Wyall on this topic. “We didn’t care so much about the pay or the recognition. We just wanted to help our country win the war.” Wyall in particular flew: AT-6s, BT-13s and PT-17s…and then there was that BT-15. In an interview with the Indiana State Museum, she recalls a “scary moment”:

I had just had 30 hours of training aerobatics in the primary trainer.  Then when we transitioned into our basic training, and were flying the BT-13’s.  I tried to do the same thing with that.  I thought I could loop, but the engine stopped and I saw the propellor, and it started slipping backwards. Of course, I had no idea what was going on.  Then all of a sudden it snapped, and it started tumbling. I thought, you know, I’m supposed to be jumping now, but [with] the G-factors, I couldn’t even pull my hand up to pull the latch.

Fortunately, Wyall was able to land the plane.  She and her co-pilot didn’t write the incident up – as they would have certainly been “washed out”. She later asked her instructor if it was possible to loop or snap roll a BT-13. He answered with an emphatic “No!” – those planes were not equipped for aerobatics. He went on to say there was a BT-15 that was structurally sound but was overweight and under-powered. It turns out she was in the BT-15.  Had she really been flying the BT-13, it is doubtful she would have lived to tell of it.

Wyall’s most memorable trip was a solo 2,000-mile cross-country trip in an AT-6. “Anytime you soloed, your bay mates would wait for you at the flight line and throw you in the wishing well.”

The job was dangerous.  Thirty-eight women paid the ultimate price in accidents while serving.  The families had to cover the costs to recover their remains. They were not given military burials. However, in 1977 that changed. President Jimmy Carter signed a bill into law recognizing WASP had flown on active duty during WWII.  Each of them would receive honorable discharges and veterans’ benefits. On March 10, 2010, Wyall and roughly 175 of the remaining WASP gathered at the US Capitol. Each was awarded the Congressional Gold Medal.  “The Women Airforce Service Pilots courageously answered their country’s call in a time of need while blazing a trail for the brave women who have given and continue to give so much in service to this nation since,” said President Obama. “Every American should be grateful for their service.”

According to Women in Aviation International, an organization that assists women in aviation and encourages young women to consider aviation as a career, Wyall was also “instrumental in the preservation of WASP history. For 45 years, she personally maintained the WASP history in scrapbooks in her home and sought out the personal stories and memorabilia of other WASP. She served as the unofficial WASP Historian until the WASP documents and artifacts were made part of the Special Collections Department of Texas Woman’s University in 1992.”

Memorial Service will be held on Friday, April 28 at Wayne Street United Methodist Church in Fort Wayne, IN.

Condolences can be sent to:

Janine Stange is a freelance writer and performer who earned the label “National Anthem Girl” after singing the “Star Spangled Banner” in all 50 states. Follow her on Twitter at @THEANTHEMGIRL.