The Air Force is proud of its diversity, providing Airmen the opportunity to live and visit places they never would... 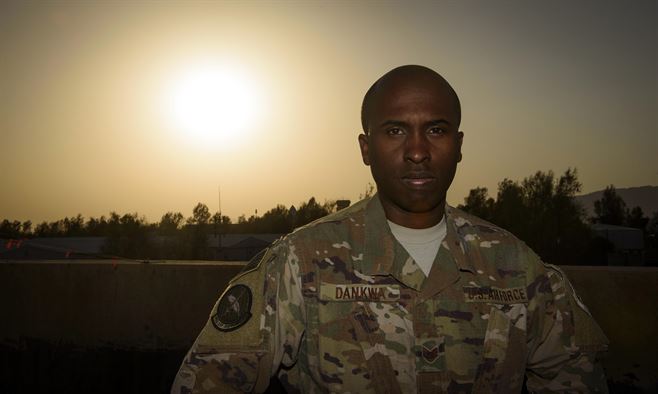 The Air Force is proud of its diversity, providing Airmen the opportunity to live and visit places they never would imagine going and working with people from all walks of life.

Two Airmen, who are deployed to Kandahar Airfield, Afghanistan, as part of the 451st Expeditionary Support Squadron, are emblematic of the diverse force.

Staff Sgt. Nana Dankwa and Airman 1st Class Yongqin Li did not grow up in the U.S. They emigrated from their respective countries and gained citizenship while serving in the U.S. Air Force.

“I grew up in Accra, Ghana, where I lived with my grandparents from my mother’s side,” said Dankwa, the 455th ESPTS civil engineer section NCO in charge. “My dad lived in the States and my mom was a nurse who travelled all over Ghana, so I really didn’t get much of an opportunity to see them. I pretty much spent my whole upbringing with my grandparents and other family members.”

Dankwa, who comes off as humble and modest, attributes his demeanor to his grandparents teaching him to respect others and to follow directions without asking questions.

“Despite living in a poor neighborhood, I was privileged to be given the opportunity to learn at the best schools in Ghana,” Dankwa said. “I went to a school with a lot of foreign diplomats and other foreigners, which opened my eyes to the western world.”

Dankwa was fascinated by floorplans growing up and would read his grandma’s encyclopedias just to look at them.

“As young as six-years-old, I would look at floorplans and just be so captivated by them that I would start to sketch my own, dreaming that one day I can use them for my dream home,” Dankwa said. “Lo and behold, fast-forward a couple of years down the line, and that is my job in the Air Force.”

As a civil engineer, he oversees the continued maintenance of the mobile aircraft arresting system and the contracts regarding the maintenance of Kandahar Airfield’s facilities.

Dankwa recognizes he had a privileged childhood. He would often watch the kids in his neighborhood play with rocks, old tires and other objects found on the street. He felt left out and wanted to play with them, but quickly realized those kids didn’t go to school and didn’t have toys to play with, so they spent most of their days on the streets. That experience opened his eyes to two very different worlds. What he saw amplified his drive to create a better world, so he set out to the U.S. to achieve his dreams.

On another side of the globe, Li was growing up in China. Li lived in what he calls a traditional Chinese family. His parents were strict and held him to a high standard.

“My family taught me discipline,” Li said. “When I acted up, I was punished. I was held accountable when I didn’t do my homework or accomplish a chore. I learned a lot from that type of environment, which made me a better person.”

Li grew up watching Hollywood movies, with his eyes set on going to the U.S. The larger-than-life characters on the big screen motivated him to do well and persevere. He viewed the U.S. as a faraway land, almost unobtainable. The values Li’s family instilled in him were the driving force behind his continued desire to move to America.

“While the movies I watched motivated me, I wanted to go to college in the USA,” Li said. “The high school system in China is very good, but the colleges in the USA are among some of the best in the world, so I strived for that.”

Dankwa travelled from Ghana to America when he was 21.

“I had an incredible passion for flying, so when I got to the States, I wanted to learn how to fly,” Dankwa said. “As I started to do it, I quickly realized how expensive it was.”

After a few years in the USA, Dankwa got married. His wife was the motivating factor behind him joining the military.

Knowing how expensive flying lessons were and having little money, Dankwa started to consider joining the uniformed services. Dankwa, who was still not a citizen at this time, was overwhelmed by an uncertain future and whether he could achieve his dream.

His family was against him entering the military, knowing that many countries in Africa have been going through multiple conflicts for decades.

“While this was a setback for me, a year later I revisited the military idea and went to the Air Force recruiter,” Dankwa said. “I joined the Air Force in 2009 and finally became an American citizen a year later. Just being a member of the world’s best Air Force meant so much to me, so to raise my hand and become an actual U.S. citizen overwhelmed me so much. It was the end of one journey, but the beginning of a new one.

“I felt so proud and felt like I could do anything I set my mind and heart to,” he continued. “I no longer had any limits or boundaries, I could achieve anything.”

Dankwa is still pursuing his dream to fly, learning through a local school near Dyess Air Force Base, Texas, and has already accumulated some flying time.

“Everything starts out as a dream and materializes on American soil,” Dankwa said. “I want to find a way to merge my job as a civil engineer with flying.”

Li arrived in the U.S. right after high school, were he lived with his uncle for a couple of years, and eventually moved out to live on his own. Li lived in the U.S. for five years before joining the Air Force.

During those five years, Li was a full-time student and worked multiple jobs to make ends meet. He bounced around Southern California, where he eventually decided to join the military.

“At first I went to the U.S. Army recruiter, but eventually went to the U.S. Navy recruiter,” Li said. “I came across the Air Force recruiter’s number and called it at 7:00 p.m. and to my surprise, he answered the phone. Next thing I know, I am on a plane to Lackland Air Force Base, (Texas), for basic training.”

Even before joining, Li was in good shape. He played a lot of basketball, swam and took a physical education class while in college. All of the activities prepared him for the physical demands thrown his way during basic training and helped him achieve one of the highest physical training scores in his whole graduating class.

The perseverance and determination instilled in him by his family enabled him to be successful, which culminated in him gaining that extra day pass and earning the title of Honor Graduate, which is reserved for the top 10 percent of basic training graduates.

But earning family time and a ribbon for his uniform were only small rewards compared to the highlight of his basic training graduation, when Li and a few other basic training graduates were granted the opportunity to celebrate their official U.S. naturalization with their wingmen and families. The day he could finally call himself an Airman was also the day he could proudly call himself an American.

“One of my proudest moments was participating in the Veterans Day parade,” Li said. “Seeing the cheering crowd filled me with so many emotions. It was amazing.”

Li is now deployed out of Offutt AFB, Nebraska, where he is a member of the 55th Force Support Squadron force management section. At Kandahar Airfield, he serves on the 451st ESPTS Personnel Support for Contingency Operations team, commonly referred to as PERSCO. As a PERSCO team member, Li is the first person a deployed service member will see when they arrive in Kandahar and the last person a redeploying member will see. His team processes financial information, awards and decorations, and keeps accountability of everyone at Kandahar.

Despite not being born as U.S. citizens, Dankwa and Li are in Afghanistan, serving the very nation they swore to protect and defend.

“The military has developed me a lot,” Dankwa said. “You get to grow friendships and bonds that are limitless. I am able to bond with great Airmen, with many different backgrounds, who have limitless potential and bring so much to the table.”