Here’s why Fox News owes a military kid an apology 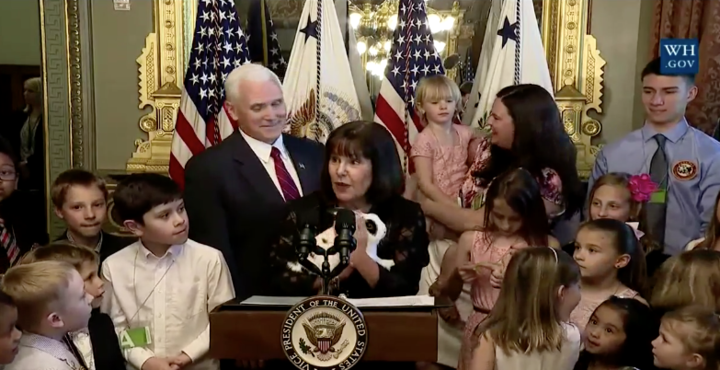 During this week the current administration typically has an event or two where military spouses and their families are invited into the White House.  Last week was no exception.

In fact, one military child in particular made national news when he was accidentally “bopped” in the face by Vice President Mike Pence. The little boy, Michael, made news when he followed the Vice President around the room to ask for an apology from the second most powerful world leader.  He can be heard on a hot mic repeatedly asking for what most adults would consider a common courtesy.  A courtesy that Pence himself extended when Michael was finally able to get his attention.

The video became an overnight sensation. But there’s also a little more that can’t be seen just by watching the clip. Michael is a special needs child. He’s autistic and his mother, Ingrid Herrera-Yee, is a mental health care specialist who dedicates her life to working with those in need.

So, there were literally no words from this Fox News watcher’s mouth when Bill Hemmer and Tammy Bruce seized on the incident to muse that Michael was a “snowflake” who in his fervent efforts to “stalk” the Vice President was actually in need of a “safe space.”

Their words, my friends.

I literally sat there in shock, certain I had misheard these two adults.  I quickly grabbed the DVR to rewind and watch again.  And again.

Suddenly, three words formed.  And they began with W, T, and F.

As a parent, I wanted to shield Ingrid, who is a personal friend of mine, from what obviously was an attack on her 10- year-old son.  As a mother myself, I felt the overwhelming need to sharpen my talons. On Bill Hemmer’s desk. As a military spouse, I am not only shocked, but I am so very disappointed in the bottom-of-the-barrel antics Fox News seems to be stuck pilfering through to find a topic of substance.

Wow.  Just wow.  What were they thinking? Did they really use their national platform to poke fun at and take issue with the behavior of an 10-year-old, special needs military child?  Are they so vastly out of touch that they don’t see how bullying is a national conversation piece and that teaching children to speak out has been decades in the making for most parents?

Professionals using words like “snowflake,” “stalking,” and “safe spaces” to describe a child is not only a stark reminder that adults can bully, but also that nothing is off-limits.

And, then it hit me: The issue is two-pronged.

1.  How did even the most casual of watchers not notice this child was autistic? (Have we failed that much that we haven’t educated and informed people sufficiently?)

2. The media should never poke fun, skewer, or lambaste a child. Period.

First, Michael exhibited all the classic symptoms of a child on the spectrum.  Who Tammy Bruce described as angry–his head-tilting was her “cue”–was a child who has only been verbal for five years.  A child who may have difficulty understanding personal space issues or noticing people’s feelings and interacts largely to achieve a goal (say, to request an apology).  Children with autism may not want to be touched– they may not enjoy physical contact at all and typically will not seek comfort from a parent when in doubt. Children with autism may repeat things over and over (“Excuse me.  Excuse me.”), even when answers are given to questions. Rarely do physical gestures, like tilting your head, “match” the words they are using to express themselves.  In fact, the Center for Disease Control suggests that children with autism speak more like “little adults” than children.

Autism affects 1 in 110 children in the United States.  While it crosses both ethnic and social lines, boys are sometimes five times as likely to develop it.

I struggle deeply with the callousness with which Fox News aired this segment. The ignorance displayed towards a special needs child is disgustingly apparent. And, yet, is likely a byproduct of ignorance, lack of education, and lack of commitment to the truth.

Second, when did it become okay for adult journalists to make a child the subject of their news segment?  This goes against every thing we teach our children about adults and bullying. I think the words “snowflake” and “safe space” are the ones that confuse me the most. These are very politically charged words used historically by “the right” to describe “the left”. . . and yet Fox News used them to describe a child.

A 10-year-old special needs boy who was just excited to be at the White House with his mom and who was doing his absolute best to communicate his thoughts and feelings.

To say nothing of Michael specifically, it’s never okay for any news brand to use a child without the consent of his parents as the brunt of their joke or the focus of their news. And, if we don’t tell them it’s not okay? The line of what we accept as tolerable just keeps getting moved further and further back.

Fox News, this is not okay.  You cannot use a minor–special needs or not–as the salacious seller of your media.  Not ever. And to borrow a few words from my 10-year-old friend, Michael, “Excuse me.  You owe us all an apology.”

Babette is the Vice President of Partnerships for MilitaryOneClick. She is the also the founder of Military Spouse magazine and the Military Spouse of the Year Awards. She is a fifth generation military “last four” and her husband recently retired after 20 years in the Navy.