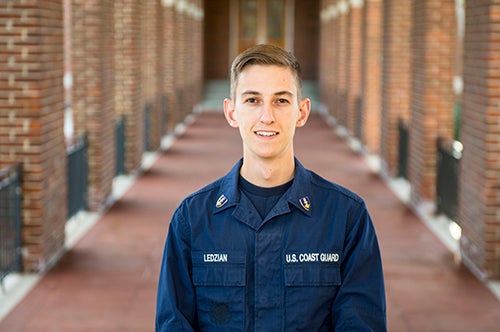 By US Coast Guard

He has previously worked with a small group to create an autonomous remote controlled car, quadcopter, and plane. During his senior year capstone project, he built upon these designs to develop an unmanned aerial system to perform search and rescue patterns.

“When we developed our first RC plane autopilot, we realized that this could have a real application in the Coast Guard,” said Ledzian. “In the future, I would like to develop a more robust and intelligent flight control system and use multiple small Unmanned Aerial Systems in coordination to complete a mission.”

The graduate research project he has in mind is a flight control system for unmanned aircrafts to allow operation in challenging or unknown environments.

“This is something I have been passionate about for two years,” said Ledzian. “My senior capstone project dealt with sUAS (Small Unmanned Aircraft Systems), and I believe they offer a low-cost solution to many Coast Guard missions.”

He will be representing the U.S. and the Coast Guard Academy as he pursues a graduate program in Systems and Control.

“Working on and being awarded a Fulbright Scholarship has been a great privilege,” said Ledzian. “I am excited to have the opportunity to make professional contacts in the Netherlands and to work with the faculty at the Delft University of Technology.”

As a Fulbright scholar and Electrical Engineering major, Ledzian will be conducting research in intelligent control systems during his graduate study at TU Delft. Upon his return from a two-year study, Ledzian will bring a unique set of skills and knowledge essential to improving the execution of Coast Guard missions.

As a cadet, Ledzian helped found the Academy’s Cadet Cyber Team and worked with the U.S. Coast Guard Cyber Command. He also completed an internship at MIT Lincoln Labs, which allowed him to work on image processing and control systems.

Ledzian, who graduates in May from the Coast Guard Academy, can expect to begin his studies in the Netherlands shortly thereafter. As a Fulbright scholar, Ledzian will enhance mutual understanding between Americans and people in the Netherlands and join over 100,000 Fulbright U.S. Student Program alumni who have undertaken grants since the program began in 1948.

“Winning a prestigious postgraduate scholarship such as the Fulbright benefits not only the individual cadet but is even more beneficial to the Coast Guard Academy and the Coast Guard,” said Dr. Alina Zapalska, an instructor and mentor to Ledzian. “The Coast Guard gains the committed service of a young officer whose education will be enhanced by international travel, instruction by the greatest minds at the world’s greatest universities and the company of ‘the best and the brightest’ peers who have won similar honors. Patrick Ledzian will possess the international perspective so desired by our service.”