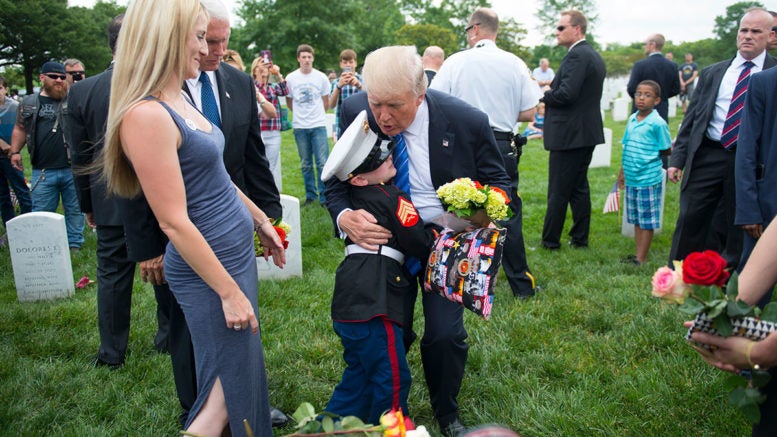 Christian Jacobs, who has been photographed over the years with his mom Brittany Jacobs visiting his father’s grave in Arlington National Cemetery’s Section 60, met Trump during the president’s Memorial Day visit to the cemetery last month.

“He looked me square in the eyes and gave me a firm handshake,” the president said today regarding their May meeting. “That 6-year-old stood strong and tall and proud in front of the commander in chief just as his dad would have wanted him to be. It’s extraordinary.”

President Donald J. Trump and Vice President Mike Pence talk with Christian Jacobs, 6, and his mother Brittany at the grave of his father in Section 60 of Arlington National Cemetery, Arlington, Va., May 29, 2017. (U.S. Army/Elizabeth Fraser)

This year wasn’t the first time Christian had visited the cemetery on Memorial Day.

Heart wrenching photos of Christian and his mother visiting his father’s grave at Arlington have been snapped by Defense Department photographers for at least the last three years.

Brittany and Christian, 4, visit the grave of her husband and his father, U.S. Marine Corps Sgt. Christopher Jacobs on Memorial Day, May 25, 2015, in Arlington, Va. Christian is wearing his father’s cover. (U.S. Army photo/Rachel Larue.)

It was unclear whether or not the pair had spent time with former President Barrack Obama during his Arlington Memorial Day visits.

“Christian, your father is an American hero,” Trump said at the White House today.