I’m not saying all other military balls and parties are lame, I’m just saying that this is the best one... 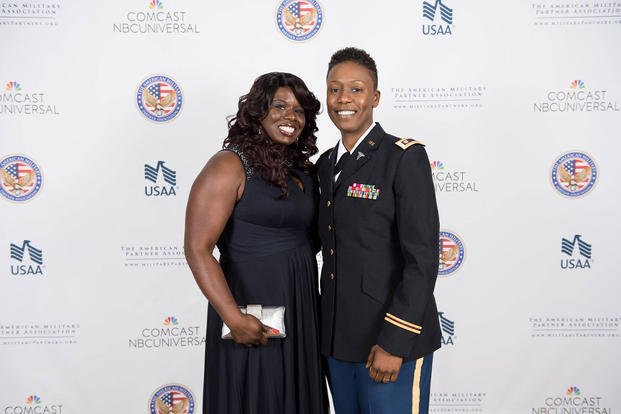 I’m not saying all other military balls and parties are lame, I’m just saying that this is the best one I’ve ever attended, and I wouldn’t miss it for the world.

The annual American Military Partner Association (AMPA) gala is, hands down, the most fun and fabulous military-related party I’ve ever attended. Held each May in D.C. just off Capitol Hill, the event manages to both be a formal military affair, complete with military ball gowns and dress uniforms, and some of the most fun, well, ever.

I honestly don’t know how they do it. Is it the cocktail hour complete with photo booth? Or the formal program with not boring speeches by interesting people (let’s be honest, sometimes those two don’t go hand-in-hand) like former Navy SEAL and transgender activist Kristen Beck or the now late Edie Windsor, who spoke about her landmark lawsuit that resulted in the repeal of the Defense of Marriage act?

Is it the not-terrible food (such a low bar for success in military ball world)? The post-official-ceremony party? The amazing people? The celebration of a community that was hiding for so long that their joy at being able to gather as a group and celebrate their families is palpable?

No one is paying me to say this, and Military.com is not an official sponsor of AMPA or the gala: I just think their event is incredible.

And that’s why you should join me and a bunch of other military spousesthere this May, including Adrianna Lupher, founder of NextGen Military Spouse, Michelle Volkmann, the site’s current editor, and a bevy of other military spouse movers and shakers. Since the party is right after the annual Armed Forces Military Spouse of the Year Awards (for which Military.com is a media sponsor), many spouses who would not otherwise be in town are there, and ready to have a great time.

Am I gushing? Sorry. I just love this event. Look how much fun we had last year:

Early Bird tickets went on sale today for the May 12, 2018 event. They also have childcare available this year (AMAZING), so if you live in the area and kiddo care is a challenge for you, there’s now no excuse to not attend. The early bird tickets are $99 until March 15, when the price goes up to $149.

I’ve, regrettably (and I mean that), paid $90 a ticket for a mandatory fun unit ball that I hated every single moment of (not exaggerating). Paying $99 for a completely amazing time with friends is so much better.