Check out General Motor’s amazing military discounts and take advantage of the great deals this fall! Posted on Nov 12,... 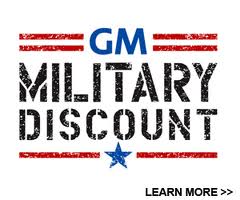 Check out General Motor’s amazing military discounts and take advantage of the great deals this fall!

While apple-picking season may be coming to a close, the time is ripe to snag a sweet deal on a new automobile. That’s because dealers are clearing out their old inventory to make way for 2013’s best-sellers.

With falling leaves typically come falling vehicle prices, as auto dealers seek to clear out old inventory and make way for the next year’s hot sellers. But several industry trends suggest that deep discounts may be more elusive than in previous years.

First, auto sales are booming again. September numbers from Autodata Corp. show that the annualized rate of car sales was the best since March 2008. Naturally, when sales come easier, incentives tend to get smaller.

The auto industry has also done a good job of matching supply to demand, preventing much of the excess inventory that used to prompt “fire sales” at dealerships.

“Supply is better controlled as a result of the down period automakers faced in recent years,” says James Bell, head of Consumer Affairs for General Motors. “We’re not overbuilding like we used to, and that’s creating more balance during the model year transitions.”

Gas prices also have an indirect effect on incentives. As of early October, the national average cost for a gallon of regular unleaded was $3.85, up more than 40 cents compared to a year earlier.

“When gas prices are high, consumers lean toward more rational, fuel-efficient vehicles — not the biggest and most powerful,” says Bell. For that reason, he says, many of the more attractive incentives will be for big trucks and SUVs.

But savvy auto shoppers with an open mind can always sniff out a good deal, no matter what their vehicle preference. Bell says easing credit conditions allow more buyers (even those without perfect credit) to qualify for low-rate financing and potentially save thousands of dollars in interest.

“There are a lot of great deals out in the marketplace, and consumers now have information available to them to make smart decisions,” says Steve Thompson, assistant vice president of the USAA Car Buying Service.

Thompson urges car shoppers to do their homework before they get to the dealership so that they know what type of car they need and what they can afford.

“Financing offers like zero percent from manufacturers can be a good deal, but oftentimes cash rebates combined with a low-rate bank loan provide the most savings,” he explains. “It pays to do that math upfront before the excitement of the buying experience begins.”

Now is also the time of year to take advantage of special incentives on 2012 models, especially those that have been redesigned for 2013. To net the biggest bargains, be flexible about color and options, as many deals are only available on very specific vehicles.