By J.G. Noll On Monday, the White House will host the Easter Egg Roll for the 139th time in American... 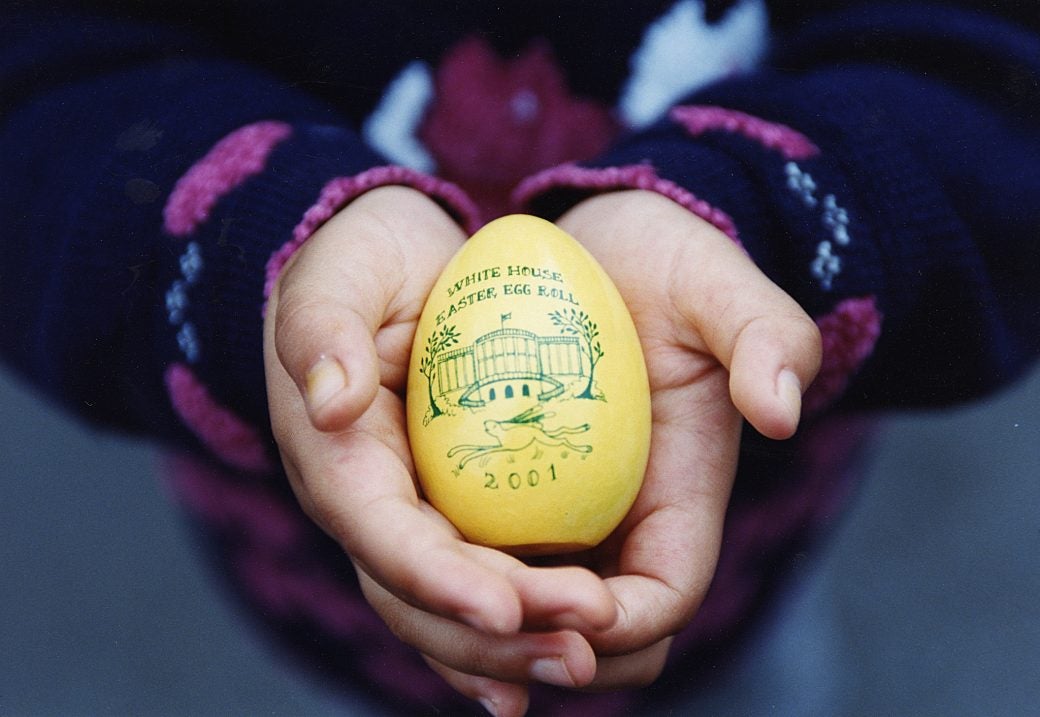 On Monday, the White House will host the Easter Egg Roll for the 139th time in American history. It’s become a treasured, storied tradition. Since the first official one, held by Rutherford B. Hayes in 1878, presidents have put their unique stamp on the springtime fete. Benjamin Harrison included music– and children danced to music provided by the Marine Band. Nixon added the Easter Bunny in 1969. The Obamas, emphasizing health and fitness in children, had yoga on the Yoga Lawn. Some traditions endured, while others were a product of their time.

Here’s everything you’ve ever wanted to know about the White House Easter Egg Roll:

Before the White House held an Easter Egg Roll, D.C. families held their own. . . using the grounds of the Capitol as their playground.

It’s possible that Andrew Johnson’s family was the first in the White House to roll eggs on the lawn, although it was not a public affair.

The popularity of egg rolls–and the destruction of the Capitol lawn–caused Congress to pass a law forbidding the grounds to be used as a playground, beginning enforcement in 1877.

Heavy rain in 1877 cancelled plans any children had made to defy the law, but it was still to be enforced in the years to come. On Easter Sunday 1878, President Hayes was taking a walk, when concerned children asked him if they could egg roll on the White House lawn Easter Monday. After asking his staff what the egg rolls were–he had never seen or heard of the activity before–he issued an order welcoming any egg-rolling children, turned away at the Capitol to the White House for the game.

At first, children brought their own eggs to roll. Now, they leave with a commemorative wooden one that is made by an American small business– a tradition started by Ronald Reagan.

In 1885, President Cleveland was summoned from his study on Easter Monday. . . by children who had come for the egg roll. He loved the idea and began a tradition of receiving the children indoors– even though they ruined his carpet with smashed hard-boiled eggs.

When the Egg Roll resumed after WWI, First Lady Florence Harding dyed some of the eggs herself. Over 50,000 children attended.

The White House’s Easter Egg Roll has only been cancelled for inclement weather, during the WWI and WWII years, and during extensive White House construction in the late 1940s and early 1950s.

First Lady Lou Hoover introduced folk dancing to the line-up of activities– as forgotten or smashed raw eggs from other games created such a rotten stench later.

In 1929, the Egg Roll was broadcast on the radio for the first time, but the Hoovers did not address the crowd (or the radio listeners).

By 1930s, the event had become so popular that limits were imposed– children and adults were only allowed in if paired together. Children who didn’t have a grown-up escort began charging adults for the privilege. It got so crazy that in 1939, the Secret Service spent time during the event stopping such activities.

For 16 years, presidents did not make a personal appearance at the Egg Roll. Gerald Ford broke that streak by greeting guests in 1976.

The Nixons were the last First Family to oversee the Egg Roll celebration where real eggs were used. They also introduced the egg roll race to the activities.

During the 1991 Bush administration, all wooden eggs were dyed yellow to honor service members abroad in Kuwait and Iraq.

In 1998, the Egg Roll was broadcast on the internet for the very first time in what the Clinton administration called a “cybercast.” First Lady Hillary Clinton began the tradition of displaying 51 chicken eggs; each decorated by an artist from each of the 50 states and D.C.

The 2003 Egg Roll was closed by President George W. Bush and a smaller party was held for children with parents serving in Iraq.

Tickets for the Egg Roll were distributed online for the first time in 2009 during the Obama administration.