By Meg Flanagan She’s gone from the battlefield to pumping up the crowds on The Daily Show. Justine Elena is... 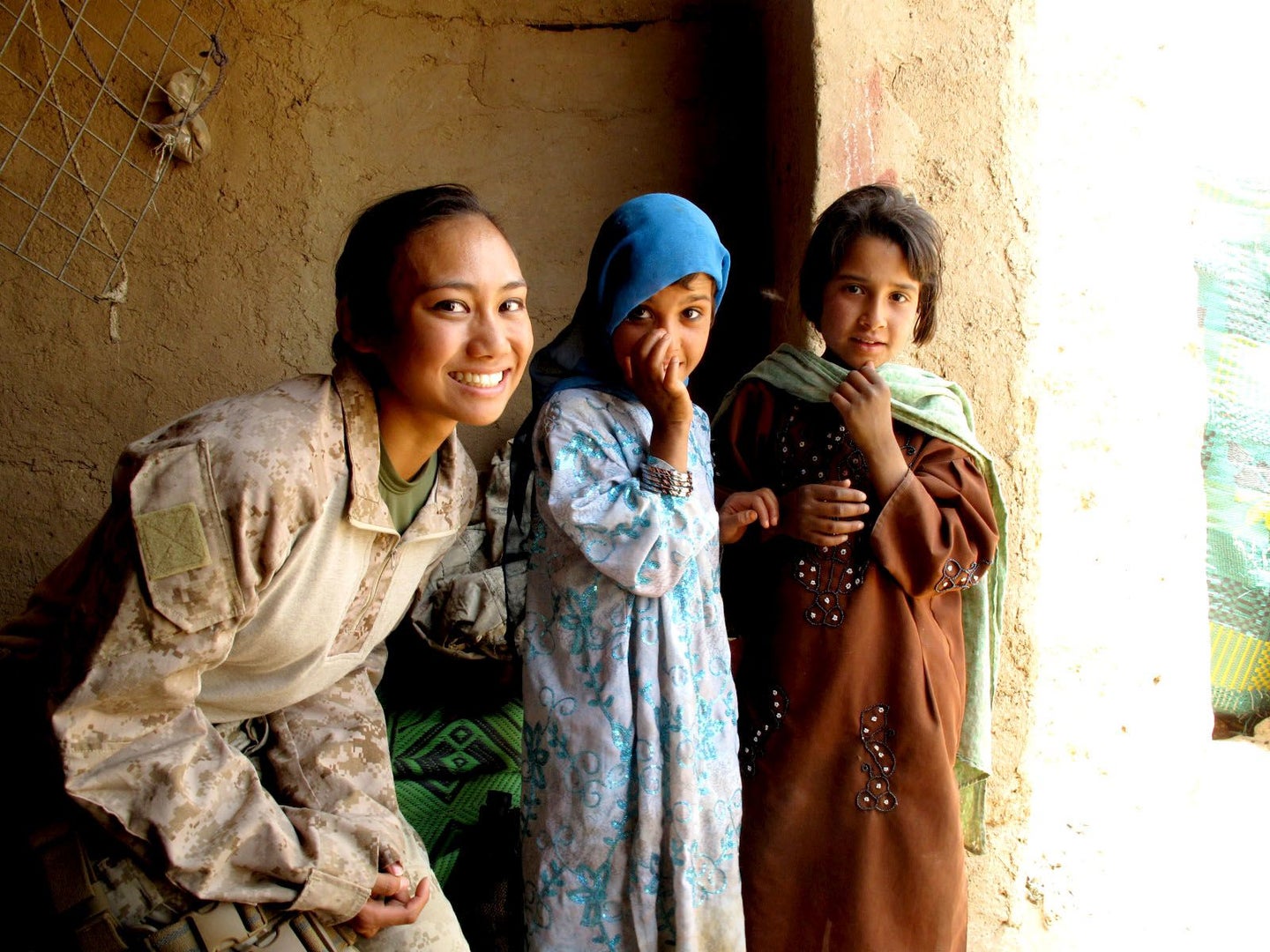 She’s gone from the battlefield to pumping up the crowds on The Daily Show. Justine Elena is breaking out in late night comedy after serving her country in the Marine Corps.

Commissioned in 2007, Justine served as a public affairs officer. The Avondale, AZ native deployed to Helmand Province from 2010 to 2011. While in Afghanistan, Justine helped journalist embed with forward-deployed units.

After leaving the Corps in 2011, Justine freelanced on several comedy television shows while working full time in the public relations industry. She was accepted into the Veteran Immersion Program in 2013 and began working on The Daily Show. Started under Jon Stewart, this job training programs helps military veterans to break into the entertainment industry.

Justine entered as an assistant production coordinator and is currently the audience supervisor. “[I manage] our day-to-day operations that involve ticketing guests, reservations for future taping, and overseeing loading our audiences into and out of the studio,” explained Elena. “I also manage VIP ticket reservations, charity auction opportunities, and work with and train production interns in everything involved with a live studio audience.”

While late night comedy and serving in the military might seem very different, there are some qualities required to succeed in both sectors. “Some of the elements that do exist on both sides would be the traits of leadership, teamwork, dependability and organization,” said Elena. “All of those qualities come into play in almost any industry that you are in, and I’m grateful for the lessons I learned in my short time on active duty.”

Her success in both fields has given Justine a unique opportunity to contribute and look back on her service. “Sometimes when we cover military topics, I’m able to put my two cents in or help out on a particular angle, and when that happens I really start to realize how different my life is now in compared to what it was and how most of the people I work with haven’t had any exposure to the military,” she reflected.

Justine started on The Daily Show under former host Jon Stewart and has continued with new host Trevor Noah. Both hosts have fostered a driven, yet relaxed atmosphere among their staff. There are even furry friends to help take the edge off.

“I’ve loved working both with Jon and Trevor and they’re very different hosts, but are both definitely two of the smartest people I have ever met,” she said. “The day-to-day operations of putting on a TV show every night is incredibly busy, but I really like the fast paced aspect of it and that we have a finished product to be proud of at the end of the day. One of the best parts about our job is that we are a dog-friendly office and have about six or more dogs roaming our production offices every day. It’s incredibly therapeutic and makes us lucky, despite all the mangled chew toys all over the place.”

Her work on The Daily Show has also lead to other opportunities in comedy, including work with very famous groups. “I’ve been a part of our improv comedy performances every month at The Uprights Citizen Brigade Theater, and have also performed stand-up at some of our Daily Show Stand Up Shows we’ve done around the city,” Justine said. “Outside of that I have also performed improv and standup around the city at some of the other comedy clubs and it’s a great way to work on material and stay connected with other people working in comedy.”

There have also been opportunities to help other veterans. Justine was asked to work with the Got Your Six campaign in 2015. Her Storytellers video has around 200,000 views on YouTube.

“Got Your [Six] reached out to me to speak at their 2015 Storytellers event in New York City,” explained Justine. “That’s when I first learned about them and I continue to partner with them in other events. I’m really glad I had a chance to share a glimpse of my story and what it meant to me and find out about other people who responded to it positively.  I’m not sure how GY6 found me, but I’m glad they did.”

“There are so many things worth telling a story about, that I feel like I will always want that aspect to be a part of my life,” she said. “Whether it’s through television, film, writing or comedy in general, my work has always been about expressing things that are happening in this world and dissecting them for consumption. So let’s just hope there’s always a job out there for me that allows me to do that!”

Other veterans can take advantage of this same, or similar, opportunities. However, this path is not without a lot of hard work and dedication. . . plus a little luck. “I’m not going to beat around the bush with this one,” advised Justine. “It is difficult, and I feel really lucky to have had the path I’ve had. You need exposure and experience. You want to have the skills that other teams will need, and couple that with the leadership and organization skills you learned in the military. Be the kind of person you would want to work with.”

There are a few steps veterans can take now to get ahead later. First, find yourself a mentor. Next, look for opportunities to gain skills in your craft or profession. Take a class or take a chance by applying for an entry level job. Know that you might not get to the top, or even the middle, immediately. Justine has had to work her way up, doing many smaller and less glorious jobs along the way. “It might not be on a major cable network or at a sold out comedy club, but it’ll be something and every bit counts,” she advised.

Even as she has moved up in the comedy television ranks, Justine has continued to draw on her experiences as a military officer. And it will inform her life choices as she moves forward. “Everything you do in your life will be a part of what you do next, but there’s no end or there are no rules when it comes to being what you want to be next” she reflected.