By Lizann Lightfoot Sergeant Reckless is no ordinary horse: She is a Marine. Reckless served a Marine unit during the... 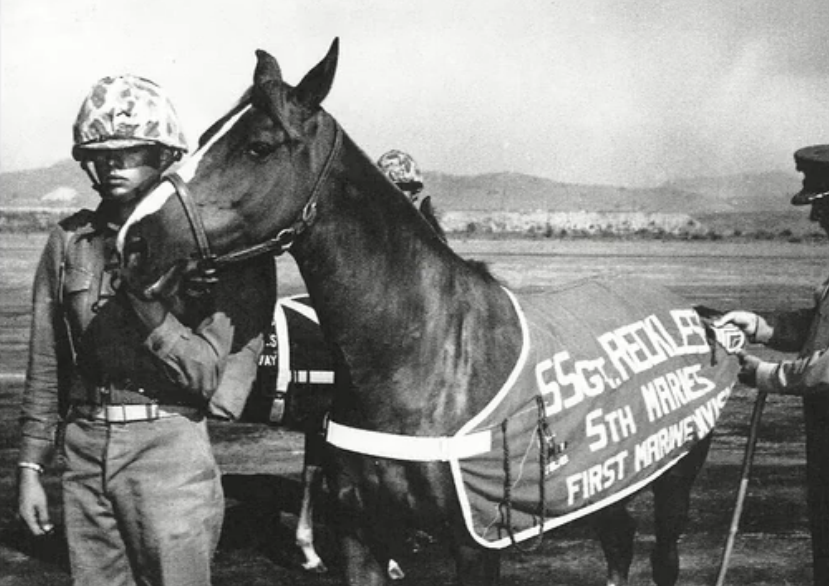 Sergeant Reckless is no ordinary horse: She is a Marine. Reckless served a Marine unit during the Korean War and is the only horse ever awarded two Purple Hearts, a Marine Corps Good Conduct medal, and a Presidential Unit citation from two different countries.

Like many Marine heroes, she came from humble beginnings. The mare was purchased in Korea for $250 from a stable boy at a race track. The 5th Marine Regiment needed a pack horse to help move heavy ammo, and the stable boy needed money to buy a prosthetic leg for his sister, who had lost hers from a land mine. Reckless was trained to carry the 20-pound shells for the 75mm Recoilless rifles. (Her American name was both a nickname for the rifles and the reputation of the platoon who used them.)

The Marines trained her to carry heavy loads and wounded bodies, endure the loud noises of the battlefield, and to run to a bunker when she heard the command, “Incoming!” The platoon put her through what they called “Hoof Camp,” and she passed with flying colors. She was able to learn routes after being led only a few times and would travel them on her own without a handler.

When she first heard the roar of a rifle being fired, she jumped completely off the ground, even though she was carrying a heavy load. Her handler calmed her down, and within a few shots, she not only stopped shaking, but became indifferent to the sound of the gun.

Although she originally lived in a pen at the camp, she was soon trusted to roam freely throughout the camp. The Marines quickly learned not to leave their food unattended, since Reckless would eat anything she could find. . .  and even drink their beer!

Robin Hutton, author of the book Sgt. Reckless, America’s War Horse, described the horse’s appetite: “Reckless had a voracious appetite.  She would eat anything and everything – but especially scrambled eggs and pancakes in the morning with her morning cup of coffee.  She also loved cake, Hershey bars, candy from the C rations, and Coca Cola–even poker chips, blankets and hats when she was being ignored–or if she was trying to just prove a point. ”

The brave pack horse was awarded both her Purple Hearts after her actions during the 1953 Battle of Outpost Vegas (Vegas Hill). By that time, she had been promoted to Corporal. Reckless crossed open rice patties filled with enemy gunfire and carried ammunition up the steep hill to the unit’s firing positions. Then she carried wounded men back down. She did this repeatedly–for days–traveling the path on her own without anyone guiding her. She was so fast that no handler could keep up with her.

In one day alone, she made 51 trips–totaling 35 miles–from the ammo supply point to the front lines. She carried a total of 386 rounds of ammo. . . which totaled 9,000 pounds. She dodged shrapnel but was wounded twice in the battle. Each time, after being patched up, she resumed her mission.

Later, when the unit transferred to Inchon, Reckless became the first horse in the Marine Corps known to have participated in an amphibious landing.

For her actions in combat, she was promoted to Sergeant in 1954 by General Pate, the highest-ranking Marine in Korea at that time. She became famous in America after being featured in Time and Life magazines. She was so beloved by the Marines and the American population that a shipping company volunteered to carry her from Korea to San Francisco so that she could remain with the 5th Marines. Reckless returned to the States and was stationed at Camp Pendleton where she accompanied Marines on marches and appeared at public functions. In 1959, General Pate, who was now the Commandant of the Marine Corps, promoted her to Staff Sergeant in a full ceremony.

In 1960, she retired from active duty and lived out her remaining days at the Camp Pendleton stables. She gave birth to four foals, three of which survived. They were named Fearless, Dauntless, and Chesty (named after Chesty Puller, the most highly decorated Marine ever.)

Reckless has two bronze statues built in her honor. One is at the Marine Corps Museum near Quantico, VA; the other is at Camp Pendleton, CA. Each statue is identical, showing the horse carrying four rounds of rifle shells up a steep hill. The statues have been visited by thousands of Marines, some from the Korean War. One explained that it was important for him to share the story with his family so they knew what Reckless had done for the Marines.