Here’s the story of the Montfort Point Marines

By Lizann Lightfoot The Marine Corps began recruiting black Marines June 1942–just 75 years ago. Although a handful of African... 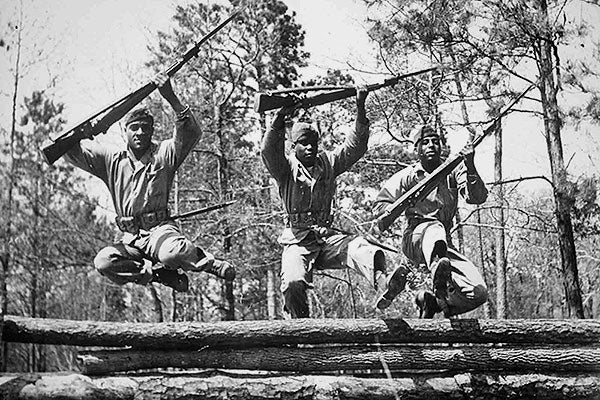 There were 600 enlisted recruits in the first few months. Most were unaware that they would not be training at Parris Island. The recruits had to help build the shabby wooden huts that they lived in during their training. The recruits from Northern states had to complete high school before enlisting, but since educational opportunities were limited in the Southern states, some recruits could barely read. Educated recruits reported that they taught their fellow Marines how to read and write.

At first, all were trained by white officers and drill instructors. Once some outstanding black recruits completed Boot Camp, they were allowed to return to assist with training as drill instructors, even though they were not yet NCOs. Within a year, all of the training was handled by black NCO drill instructors. The first was Sgt. Maj. “Hashmark” Johnson, so called because he had already served in the Army and Navy, so he entered the Marine Corps with three hashmarks on his sleeve for years of experience. The first black officer, 2nd Lt. Frederick Branch, was not commissioned until 1945.

The Montford Marines experienced racism during training and while in combat. One explained that they had to “fight for the right to fight.” During training, black recruits were told that “if you want to be a black Marine, you will have to be better than anyone else.” They were not allowed to visit nearby Camp Lejeune without a white escort. At least one was arrested for “impersonating a Marine” while wearing his dress blues in his hometown because the police had never seen a black Marine. Sgt. Maj. “Hashmark” Johnson was beaten by white MP’s who thought he must be out of uniform for wearing hashmarks on his sleeve.

Most were assigned to artillery units in the 51st and 52nd Defense Battalions, which worked with anti-aircraft guns, or into Ammunition and Supply Depot positions that were not supposed to see combat. Nevertheless, the Montford Marine units trained hard until their guns were extremely accurate. They shattered records formerly held by white Marine units.

During World War II, black Marine units saw action at Saipan, Guam, Peleliu, Iwo Jima, and Okinawa. The 52nd was called the “Black Angels of Peleliu” because they came to the assistance of a white Marine unit that was completely surrounded and pinned down by enemy fire. Those who remained in the Marine Corps after World War II fought in the Korean and Vietnam wars.

The Montford Point training facility was dissolved in 1949. President Harry Truman issued the Executive Order that desegregated all branches of the military. During its time of operation, approximately 20,000 men completed Marine Corps recruit training at Montford Point. After 1949, black recruits trained side-by-side with all other recruits at Parris Island or Recruit Depot San Diego.

In 2012, the 368 surviving Marines who trained at Montford Point were each awarded a congressional gold medal to honor their service. This is the highest civilian award that Congress can bestow. Last year, a new memorial was dedicated at Camp Johnson, the former site of the Montford Point training area. (Camp Johnson is named for Sgt. Major Gilbert “Hashmark” Johnson.) The memorial features a 15-foot bronze statue that represents the African-Americans who became Marines there. An M1A1 anti-aircraft gun behind the statue symbolizes the primary weapon most Montford Point Marines trained to use. Behind them, a wall with 20,000 stars honors all the unnamed Marines who were trained at Montford Point.