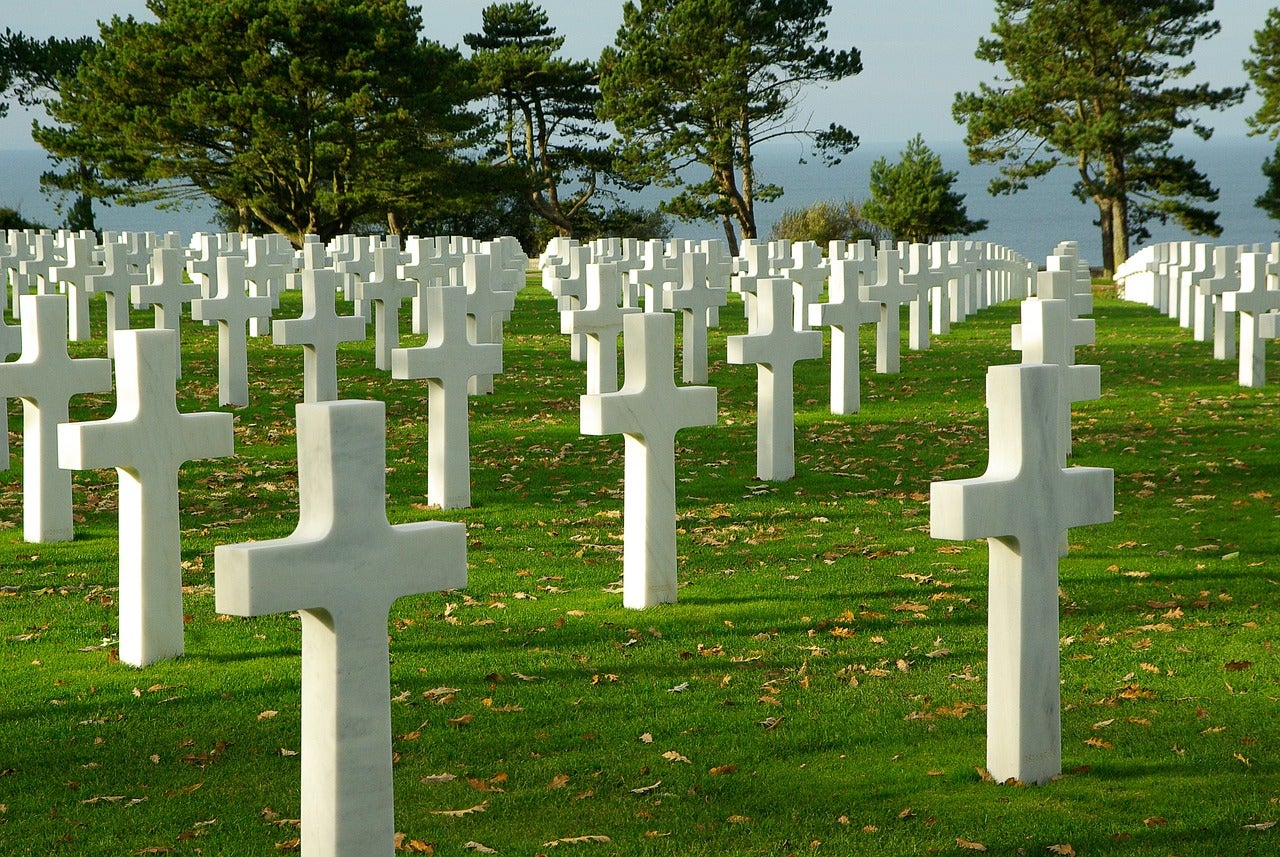 On June 6, 1944, more than 160,000 Allied troops landed on the beaches of France in the Normandy region. This marked a turning point of World War II, which has since been called D-Day. Securing the beaches allowed the Allied troops to gain a foothold in Europe. In the following year, they would press towards Berlin to defeat Hitler’s troops. However, the D-Day victories came at great cost. Allied casualty counts (wounded and dead) are estimated around 10,000, which includes the deaths of 2,500 Americans.

How to get to the D-Day beaches

I visited the Normandy beaches in 2003 when my Marine was deployed to Iraq and I was studying in Paris for a semester. It was an emotionally challenging trip for me to take while he was in combat, but I was grateful to travel with friends. At the time, I knew little about military history, so the visit was eye-opening and moving. If you are stationed in Europe, the D-Day beaches are an important destination you should not miss.

Because the beaches are not located near major towns, the only way to reach them is by car. If you take a train from Paris to Caen, Bayeux, or Le Havre, you can rent a car to complete your tour. If you drive from Paris to Normandy, you can reach the beaches in about three hours. You can visit each site on your own, or you can pay for a tour guide or package tour from any of those towns.

The American Cemetery and Visitor Center is the best place to begin a visit to the Normandy Beaches. It overlooks Omaha Beach, one of the bloodiest D-Day sites. America acquired the cemetery land from France immediately after the invasion to bury the dead. There are over 9,000 US troops buried there. (Many were killed in subsequent fighting after D-Day.) Each grave is marked with a pure white cross or Star of David, laid out in neat rows.

The memorial garden has a huge bronze sculpture of a figure reaching skyward. It is called “The Spirit of American Youth Rising from the Waves.” Behind it, there are stone pillars with the names of 1,557 missing troops whose remains were never recovered or identified. Every year on June 6, this is the site of a D-Day tribute ceremony for surviving veterans and family members.

Omaha Beach is where Americans suffered the most casualties. It has been memorialized in movies like Saving Private Ryan and the TV show Band of Brothers. On D-Day, the Army’s 1st and 29th Divisions landed at Omaha and became pinned down for hours under machine gun fire and mortar shells. The invading forces suffered around 2,000 casualties (wounded and dead). Today, the beach is completely empty, with no evidence of the bloody battle fought there. It is extremely wide and open, which gives visitors an indication of how far the Allied troops had to move under fire during the invasion. Looking up at the hills and cliffs that surround Omaha Beach is both intimidating and awe-inspiring.

Utah Beach was the second landing site for American troops. (British and Canadian forces landed primarily at nearby Juno, Gold, and Sword Beaches). Although these beaches were also fortified by German troops, the casualty counts here were much lower. There are small monuments at these beaches dedicated to the units who landed and fought here, but they are otherwise clear and pristine.

Pointe du Hoc is a high bluff with steep cliffs that stands between Omaha and Utah beaches. The Germans had fortified the cliff top with heavy artillery guns that could take out ships or troops approaching the beaches below. In the weeks before D-Day, Pointe du Hoc was bombed repeatedly from the air and with 14-inch shells from the Battleship Texas. Hundreds of craters can still be seen on the cliff top today, along with concrete bunkers. This is one of the most eerie and interesting D-Day sights, because the entire field is left as it was in 1944. You can climb into bunkers, step around rubble, and see the grass-covered craters.

On D-Day, the 2nd Ranger Battalion had the mission of scaling the 100-foot high cliffs and neutralizing the German position. 225 men climbed the cliffs at night. They were surprised to discover that the Germans had already moved the artillery guns to a nearby location. Securing the guns and fighting off the German attempts to reclaim the site cost many Ranger lives. When relief arrived two days later, less than 40 Rangers had survived. There is now a monument to the Rangers at the top of the cliff.

Arromanches-les-Bains, located just east of the landing beaches, is the town where the allies launched their landing and resupply mission after the beaches were secured. In the months following D-Day, the Allied nations would transport more than two million people, 500,000 vehicles, and four million tons of supplies into France to support the troops as they fought their way to Germany. For that purpose, England built an enormous portable harbor made of concrete blocks and floating steel causeways. The entire artificial harbor was towed across the English Channel and installed in Arromanches immediately after the Normandy invasion. Today, there are enormous pieces of equipment and the harbor that have been abandoned on the beach. When I visited, I marveled at the giant steel tanks and ships on the shoreline. Enough of the causeway remains to give a sense of this engineering marvel, but you can also visit the Arromanches 360 museum to get the full effect of wartime photos and film.

Caen, the major town east of the beaches, has a museum dedicated to the Normandy invasion. It is called the Memorial Center for Peace and History. If you visit, interactive exhibits will help explain World War II and take you through the different stages of the Battle for Normandy. This is a great place to realize the sacrifices of French citizens as well as British and Canadian troops on D-Day.