Here’s who wins in a PCS Season Madness bracket

By Lizann Lightfoot Not everyone follows March Madness. (It’s college basketball, in case you forgot.) The top 68 men’s teams... 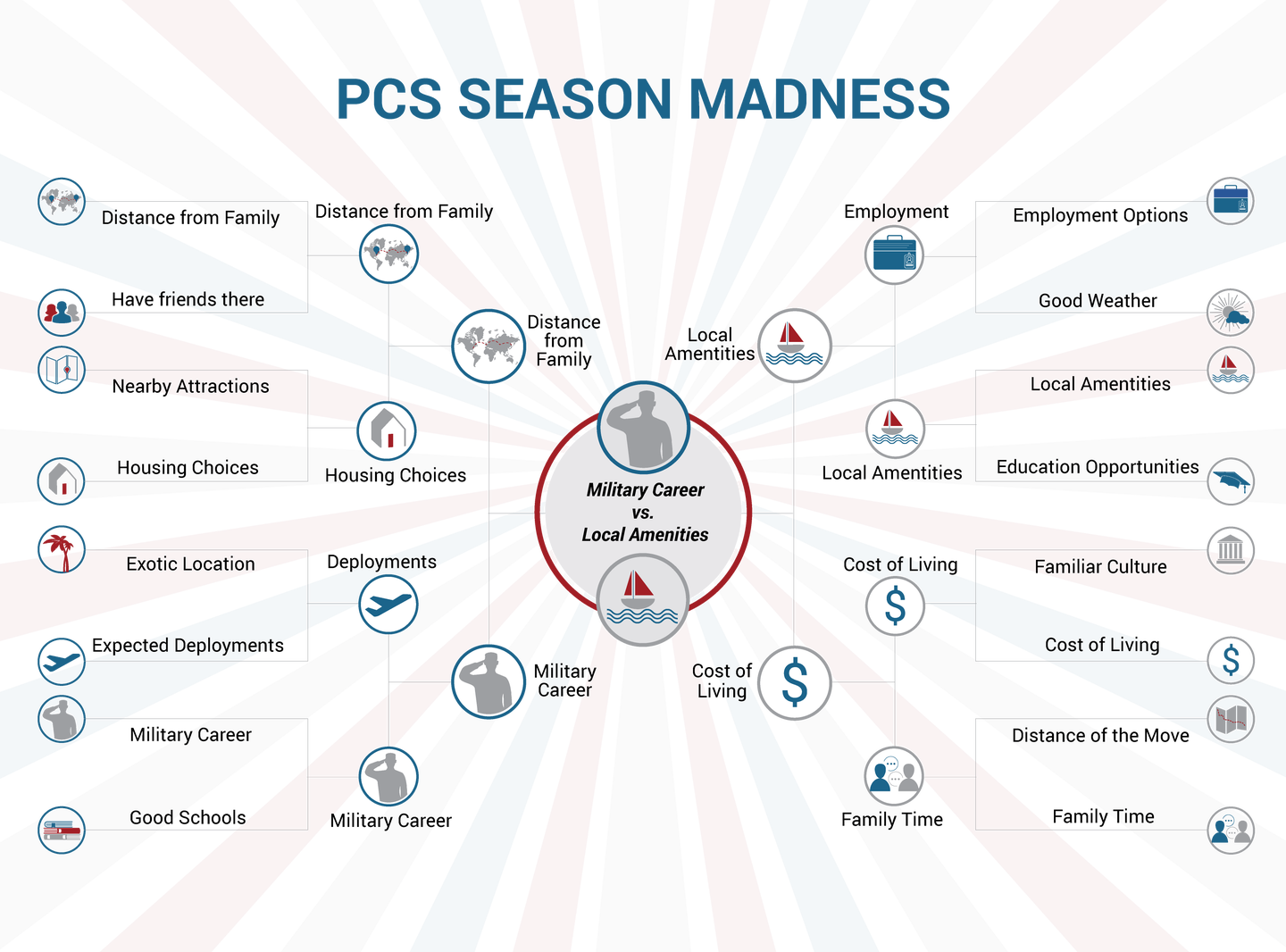 Not everyone follows March Madness. (It’s college basketball, in case you forgot.) The top 68 men’s teams and 64 women’s basketball teams from Division I schools compete in single-elimination tournaments that last most of March and some of April. As teams are eliminated, the bracket gets smaller and the winners move closer to championship titles. If someone in your house watches college basketball, you’ll hear a lot about the bracket, seeds and pods, the Sweet 16, and the Final Four.

Military spouses have their own version of March Madness. It uses a bracket system to decide winners and losers in the fun sport of PCS Madness. It usually starts like this:

Service member: “How would you feel about going to X duty station next?”

Spouse: “Where is that?”

Spouse: “Well. . . we would be far from our families, and I don’t know anyone else there. Why do you want to get orders there?”

Service member: “Because I need to go to a school there. While I’m in school I will be non-deployable.”

In that first bracket, being non-deployable won over being close to family and friends. Then you move onto the next bracket, which might be non-deployable vs. schools. And so it goes, until you finally decide which priorities are most important to you. The winner indicates your champion requirement when searching for a new duty station.

We asked military spouses to share some of their top deciding factors when looking for the next duty station. Their top 16 qualities–or Sweet 16–are shown here in our special military spouse edition of March Madness. . . PCS Madness.

What would military spouses choose as their Sweet 16 during PCS Madness?

Important to military career: Does the service member need to complete an assignment here in order to advance their career?

Location close to family: How often will family come visit you? How expensive will it be to visit?

Good weather: The most popular assignments are those with lots of sunshine and near a beach.

Employment opportunities: Will the military spouse be able to find local employment in their career field?

Affordable housing: Can you afford to live off base? What is the on-base housing like?

Good schools: On base, off base, or DoDEA school? If you have kids, you know that finding a good school district is no easy task.

Nearby attractions: What is there to do around this base? Amusement parks, sporting events, concerts, and nightlife can make duty stations more enjoyable.

Distance of the move: Is the new location overseas or across the country? How difficult will it be to move there?

Already have friends there: Knowing people on base can make the moving process go more smoothly.

Exotic location: Is this a tropical paradise? Or is the new duty station in the middle of the desert? (*Cough* Twentynine Palms. *cough*)

Expected deployments: How often is the service member expected to deploy at this location?

Familiar culture: Have you lived in that part of the country or the world before? Or will you have to learn everything new, starting with grocery store chains?

Education opportunities: Are there college classes on base? Will the spouse be able to pursue their education or training locally?

Cost of living: Some areas of the country are way more expensive than others. I’m looking at you, Southern California.

Amenities in town: How big is the town around base? Will it have the stores, restaurants, and services you are used to?

Family time: What will the service member’s schedule be at this assignment? Will they work odd shifts or long hours compared to other duty stations?

What would military spouses pick for the Final Four?

If the categories above represent the Sweet 16 priorities when choosing a duty station, then the top four qualities could be called the Final Four. The Final Four will be different for each military spouse. Nevertheless, when we interviewed military spouses to hear their top priorities, we kept hearing the same ideas repeated:

And the winner is…

No matter how many times we play PCS Madness, the winner is almost always the same. No matter what we think about a potential duty station’s location or employment opportunities or the fact that the town just built a brand new mall, we all know how the play-offs are going to play out. Ultimately, the service member’s job is going to be the final champion. Military spouses can adapt to almost any duty station and any assignment but the service member often doesn’t get a choice. Even after completing a Final Four wishlist, the service member must go wherever the military sends them. Sometimes it is a station from their wish list. Other times it is not even close. The military career is going to trump most other factors in PCS Madness.

But that doesn’t matter to military spouses. We still like to play along anyway.

If you were filling in your own PCS bracket, how would you pick the Final Four? What are the four most important qualities in a duty station for you?