Our founder, Jen Pilcher, ran into the HGTV crew at the White House last week during the ‘Joy to All’... 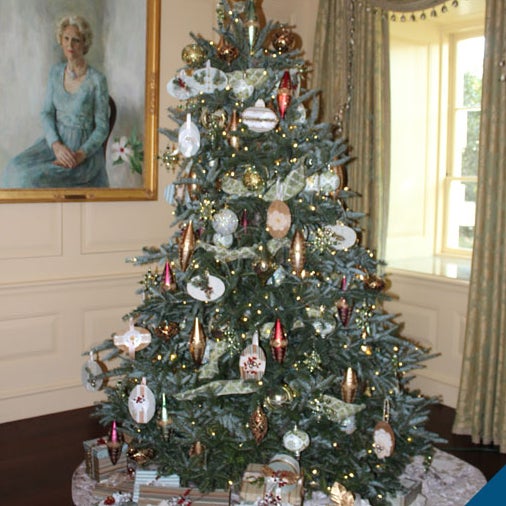 Our founder, Jen Pilcher, ran into the HGTV crew at the White House last week during the ‘Joy to All’ Event. It turns out that they were filming for the upcoming show, ‘White House Christmas’, which premieres tomorrow night on HGTV at 8PM EST!

New York, N.Y. First Lady Michelle Obama will discuss the joys of giving, the power of service and the importance of remembering the contributions of troops and military families during HGTV’s White House Christmas 2012 on Saturday, December 8, at 8 p.m. ET/PT.  The annual one hour special, which has aired on the network since 1998, will return this season with Designer Genevieve Gorder providing a behind-the-scenes look at volunteers and White House staff as they activate the 2012 décor theme, “Joy to All.”  In addition, visitors to HGTV.com will find an extensive behind-the-scenes photo gallery of the decorating process, as well as a retrospective of holiday décor at the White House.

“I think next to the North Pole, this is probably one of the most magical places,” said the First Lady as she discussed the holidays at the White House. “The house comes alive in so many ways and with so many volunteers, and such excellent staff, the transformation happens literally overnight.”

During the special, the First Lady will reveal some of her favorite spaces and rooms throughout the house, including the Grand Foyer which showcases spectacular trees that pay tribute to past First Ladies and the Red Room which speaks to her passion for healthy eating with displays of cranberries and fresh fruit.

From concept to reveal, White House Christmas 2012 will showcase the transformation of each room in the White House, including the Blue Room which contains the official Christmas tree – an 18-foot-6-inch Fraser fir.  Also showcased is the East Landing, decorated to pay tribute to the Armed Forces and their families, and the Gold Star tree, specifically honoring fallen soldiers.

Viewers also can expect to see the iconic 300 pound White House Gingerbread House, featuring more than 175 pounds of gingerbread and 50 pounds of chocolate as well as a giant black-and-white pom-pom topiary tribute to First Dog Bo, who the First Lady describes as “a wonderful inspiration because he’s a really great dog who brings a lot of joy to everyone in this house.”

As part of her interview, the First Lady will discuss the feeling she wants the anticipated 90,000 visitors to the White House to take away when they see the ornaments and décor:

“Something to remember during these times is that it’s not just about getting gifts, but about serving others,” said the First Lady.  “The holidays are a time for sharing all of our wonderful blessings that we’ve had over the years and, of course, the joy of welcoming our friends and family into our home.”

America’s leading home and lifestyle brand, HGTV features a top-rated cable network that is distributed to more than 98 million U.S. households and the HGTV website, HGTV.com, the nation’s leading online home-and-garden destination that attracts an average of four million unique visitors per month.  The brand also includes the HGTV® HOME consumer products line which showcases exclusive collections of paint, flooring, soft goods and other home-oriented products, as well as HGTV Magazine, a new home and lifestyle publication published in partnership with Hearst Magazines.  Viewers can become fans of HGTV and interact with other home improvement enthusiasts through Facebook, Twitter, Pinterest and Instagram.