Here’s the history of ‘social experiments’ in the military

This week, President Trump released a three-tweet policy change that affects transgender troops and their families. The tweets seem to... 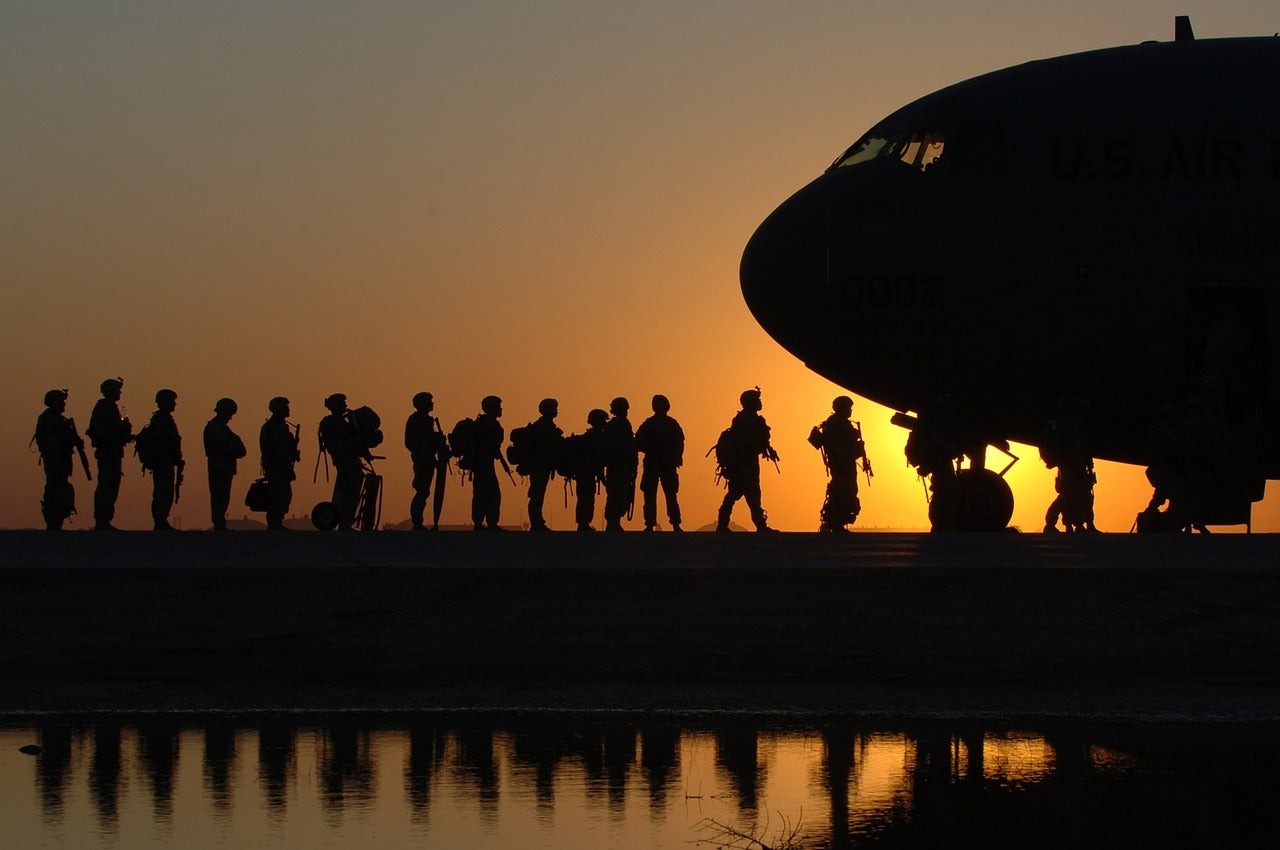 This week, President Trump released a three-tweet policy change that affects transgender troops and their families. The tweets seem to bar transgender military members from serving, although the chairman of the Joint Chiefs of Staff released a memo stating, “There will be no modifications to the current policy until the President’s direction has been received by the Secretary of Defense and the Secretary has issued implementation guidance.” While it’s unclear whether or not these tweets can be put into effect, the internet lit up with commentary all the same.

One of the reasons many supporters of the change cite is that “the military isn’t the place for social experiments.”

But that’s not exactly true. From its earliest years, the military has been on the forefront of societal change and innovation. Being allowed to defend and protect one’s country is a right that many groups of people have long held dear, including groups that the US hasn’t always given full rights.

Frederick Douglass once wrote, “Once let the black man get upon his person the brass letter, U.S., let him get an eagle on his button, and a musket on his shoulder and bullets in his pocket, there is no power on earth that can deny that he has earned the right to citizenship.” For many marginalized people, this sentiment rings true, even today.

Even before slavery was abolished nationwide, black and brown people fought in US military ranks for freedoms they could not access. During the Revolutionary War, black and white soldiers fought alongside each other; with a few exceptions, ranks were integrated. During the War of 1812, even though they were not promised freedom, slaves–and their free black counterparts–joined the Navy or privateers and earned the praise of leaders like Commodore Perry and Isaac Chauncey. Chauncey wrote, “I have nearly fifty blacks on this boat and many of them are among the best of my men.”

During the Civil War, black men–and at least one woman–joined Northern regiments, like the famed Massachusetts 54th “Swamp Angels.” Their gallantry and staggering mortality rate–about 50 percent–earned them national recognition and admiration. The same regiment produced the first black Medal of Honor winner, Sergeant William Harvey, who became an impromptu flag bearer during the battle of Fort Wagner, crying out, “Boys, the Old Flag never touched the ground!” His patriotism even inspired a song in an early Broadway musical.

While the units were not integrated and white officers commanded black enlisted troops, for many white soldiers, it was the first time they came in close quarters with people of a different race. Most black troops were used in support roles, not in actual combat roles, including Harriet Tubman, who scouted for the 2nd South Carolina Volunteers. By the end of the Civil War, roughly 10 percent of the Union Army was black and 40,000 of those men and women had died in service to the North. 16 black service members had earned the Medal of Honor.

Even though they had faced at least the same challenges and hardships, black soldiers earned just a little over half of what their white counterparts were compensated. An act of Congress changed that in 1864, granting equal pay across the Union Army, very likely making the military the only place where a person of color’s right to earn the same as a white person was codified at that time.

Segregation continued into World War I; regardless, the famed Harlem Hellfighters captured the nation’s admiration, attention, and imagination with their daring and overwhelming sacrifice. Their return stateside was met with celebration and excitement from both white and black New Yorkers.

During World War II, segregation was again the military’s status quo. By the end of the war, the military was the nation’s largest employer of people of color. In 1948, President Truman signed Executive Order 9981, officially desegregating the military, stating that “there shall be equality of treatment and opportunity for all persons in the armed forces without regard to race, color, religion, or national origin.” The order came six years before the Brown v. Board of Education ruling that officially desegregated all schools, seven years before Rosa Parks began her now-famous bus ride, and 19 years before the Supreme Court ended the ban on interracial marriages across the country.

For most of US history, members of the LGBT community have been unable to serve openly in the military. In 1957, the US Navy Board of Inquiry published a report stating there is “no sound basis for the belief that homosexuals posed a security risk.” While the military policy would continue to label homosexuality and homosexual acts as a reason for dismissal, another 1988 report reaffirmed the claims made in 1957. The Don’t Ask Don’t Tell (DADT) policy enacted in 1993 under President Clinton kept service members–and their families–secret, quiet, and unable to access health care and other services, even though it was hailed as a compromise at the time. It discharged 13,000 troops from service.

In 2010, legal battles and a report stood on the side of LGBT members serving in the military, and also in 2010, Congress repealed DADT, 5 years before marriage equality became the law of the land.

While opponents of inclusion said that it would harm unit cohesion and create distractions, it seems that it has actually made military members more accepting of differences. A 2009 Military Times poll before the repeal of DADT  found 35 percent of military members said gay and lesbian people should be able to serve openly in uniform. After five years and the repeal of DADT, the number stood at 60 percent. In 2009, 49 percent of military members believed that lesbian, gay, and bisexual people should not serve. In 2014, only 19 percent believed the same thing.

Many of the very earliest forefathers and founding mothers were immigrants, striving for a better life on a “new” continent. As Alexander Hamilton–and others–knew, proving oneself could be best done through military service. Let’s face it: Immigrants have never had an easy time in America. Whether they are used for hard labor that no one else wants, blamed for the economic woes of the country, or seen as dangerous people, immigrants have found pathways to fuller acceptance in the military.

Since the Civil War, the US has offered citizenship help–in some form or another–to those who are willing to die for a country that is not yet their own. During World War I, with anti-immigration fever high, the proving ground of the military became even more important. During this time, too, the government waived the five-year requirement for residency, allowing almost 150,000 serving immigrants to become citizens faster.

Again, being in close quarters with different people helped to break down societal barriers. According to the National Park Service:

Tennessee-born Sergeant Alvin York, one of the most decorated Americans of World War I, described in his memoirs how horrified he was initially at being “throwed” in with a bunch of “foreigners” — but he dedicated those memoirs to “the Greeks, Irish, Poles, Jews, and Italians who were in my platoon … They were my buddies. I jes learned to love them.”

And the importance of this social change was not lost on immigrant members of the military. Medal of Honor honoree Michael Valente said, “I did not forget, while the President was conferring the award, that he had decorated an American of Italian origin–and that through him honor can come to all Italians who emigrated here.”

Fast-forward almost a century to 2002 when President George W. Bush signed an executive order “authorizing all who have served honorably in the U.S. armed forces on or after Sept. 11, 2001, to file for citizenship under section 329 of the INA.” Until revoked through another executive order, this provision for non-citizens still stands today.

Immigration policies in the military took another step forward under President Obama with the Naturalization at Basic Training Initiative in 2009. Beginning with the Army, and now having expanded to the Navy, Air Force, and Marine Corps, enlistees have “equal opportunity to (in most cases) leave basic training as U.S. citizens.”

Just like every other group in this piece, women have been serving either officially, secretly, or unofficially in the military since its inception. Women like Margaret Corbin who picked up arms in the place of her dead husband, Deborah Sampson Gannet who hid her identity to serve as a man and rose to the ranks of corporal, Cathay Williams who is the only documented black woman who fought in the Union Army, risked their lives and often faced scrutiny, humiliation, and poverty after they were found out. Some, like Corbin, fought for and won their rightfully owed military pensions at a time when women were second-class citizens.

During the Civil War, Mary Edwards Walker became the first and, to this day, the only female Medal of Honor recipient.

During World War I and World War II, women made incredible leaps in equality. Because every man was needed for the front lines, women became truck drivers, WASPs, WACs, WAVES, secretaries, and a whole host of other professions, many times being endangered by their male counterparts. While many women lost their military jobs after each war, each time, the acceptance for women in the workplace grew a little more.

The same year that Truman made racial integration official in the country, women’s right to serving was codified through the Women’s Armed Services Integration Act. It allowed women to serve in the military–even during peace time. Beforehand, women could only serve during times of war. Even though most women did not work outside the home at the time, the act provided women a new career path. And many took it.

During the Korean and Vietnam Wars, women served in increasing numbers and became the bedrock of health care for deployed troops. In 1976, women were allowed to attend service academies, and in 1978, women in the Navy and Marines could begin serving on non-combat ships.

During the Gulf War and War on Terror, women, although not officially serving in combat roles, experienced the same perils as their male counterparts in designated combat roles.

The military has also pioneered efforts like parental leave policies, with branches offering options for new parents that go above and beyond what civilian jobs usually offer.

In 2016, the first female soldiers became infantry officers and the first woman joined the Rangers, while 2017 saw the first female Marines graduate from infantry school. Gen. Lori Robinson became the highest ranking woman in US history. The USS Ford became the first ship in the fleet entirely outfitted with gender-neutral bathrooms.

So what does it all mean?

Because people from all walks of life serve–and want to serve–the country, the military naturally becomes a place of experimentation and a catch-all for the social issues of the day. These “social experiments” in the military often happen ahead of societal acceptance, laying the ground work for the rest of society and making our union more perfect with each iteration of acceptance and rights. To suggest otherwise conveniently forgets our history.