A federal funding proposal issued by the White House this week would cut the amount of food aid given to... 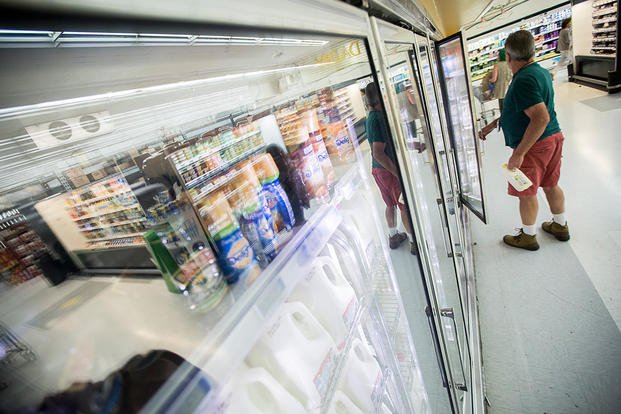 A federal funding proposal issued by the White House this week would cut the amount of food aid given to most recipients, including many military families, and replace it with a subscription-style box of delivered foods.

The proposal, announced Monday, would slash the food stamp program, known as the Supplemental Nutrition Assistance Program (SNAP), by $17 billion in 2019.

Instead, about half of the benefits received by more than 80 percent of all users would be replaced by a regular supply of government-sourced nonperishable foods, which officials likened to a “Blue Apron-type program.”

“What we do is propose that for folks who are on food stamps, part — not all, part — of their benefits come in the actual sort of … Blue Apron-type program where you actually receive the food instead of receive the cash,” Office of Management and Budget director Mick Mulvaney said in a Monday briefing.

That change would also impact thousands of military families who monthly receive the SNAP benefit across the U.S.

Although Pentagon officials have not yet commented on the proposed cut, in the past they noted that such cuts would hit troops hard, and that they would look to mitigate any impact on families were the cuts to be approved by Congress.

The number of active-duty military households who use food stamps is notoriously difficult to track, in part because the Department of Agriculture (USDA), which manages the program, and the Pentagon have not in the past shared data on the subject, according to 2016 report from the Government Accountability Office (GAO).

That report found that about 23,000 active-duty troops use food stamps in 2013, the most recent year for which such data were available.

“USDA has access to data on service members’ use of food assistance programs, but none of the DoD officials with whom GAO spoke were aware of efforts by the department to coordinate with USDA to access these data,” the report said.

“The National Defense Authorization Act for Fiscal Year 2016 included a provision to address the sharing of SNAP data between USDA and DoD; however, DoD does not have a coordination effort underway to access such data. Without such coordination, DoD will miss the opportunity to collect data on the needs of its service members,” it continued.

An update from the Pentagon on whether such coordination has since started was not immediately available.

Currently, Basic Allowance for Housing (BAH), which could be up to thousands of dollars a month, is counted as part of total household income when a military family applies for SNAP.

But anti-hunger advocates say that including the allowance in the calculation creates a disparity between families because BAH levels fluctuate by location.

For example, a BAH rate in a high cost-of-living area, such as San Diego, can bump a family out of SNAP eligibility when the help is most needed because food costs are also higher, advocates say.

Legislation to change that requirement stalled on Capitol Hill last year when Rep. Mike Conaway, a Texas Republican who chairs the Agriculture Committee and sits on the Armed Services Committee, declined to grant an administrative waiver that would allow such a fix to be considered outside the Farm Bill, which is due for renewal this year.

About 751,000 food stamp transactions, or almost $80 million in purchases, were completed at military commissaries in 2015, the latest year for which data were readily available. But it is unclear whether those users were active-duty shoppers who regularly receive BAH, or other patrons, such as retirees, National Guard members or reservists.

A Military.com Freedom of Information Act request for scanned ID card demographic data that identify who uses food stamps at the commissary was denied last year when the Defense Commissary Agency (DeCA) top attorney said it is selling that data to three market research firms.

DeCA public affairs officials, however, later contradicted that statement, instead stating that because the agency could sell it, they are excluded from publicly releasing it.

A military-only food program known as the Family Subsistence Supplemental Allowance was terminated in September 2016 for troops stationed stateside. That program allowed qualifying families to receive payments of up to $1,100 a month instead of receiving SNAP. Families stationed overseas, where SNAP is not available, can still use the program.

The food box would include “shelf stable foods” such as milk, juice, grains, cereals, pasta, peanut butter, canned meats and canned fruits, vegetables and beans, according to the fact sheet.

Anti-hunger advocates said such a box misses the mark because, in part, the food it would contain would likely not meet the needs of those receiving it.

“We’re working on trying to ensure that any and all military families who need support are getting it,” said Michelle Stuffmann, a spokesperson for MAZON: A Jewish Response to Hunger.

“We want to make sure that all military families are getting the support they need, and shelf stable canned chicken and canned vegetables and other not fresh, not necessarily nutritious food doesn’t necessarily meet their needs,” she said.

Details on how or how often the boxes would be delivered were not released.

About 43.5 million people in 21.5 million households received food stamp benefits in 2016, the latest year for which such data is available from the USDA. The average household received a monthly benefit of $249.