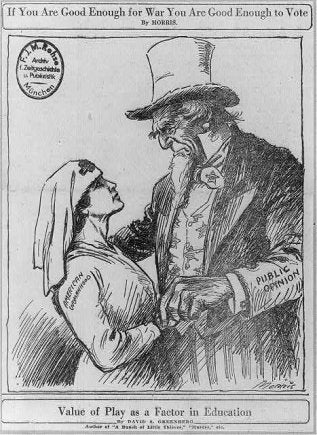 Over one hundred years ago, on April 6, 1917, the U.S. Congress voted to declare war on Germany and the nations allied with it.

The most momentous event to confront the nation in the first decade-and-a-half of the new century, the First World War was fought mainly in Europe between August 1914 and November 1918. The U.S. government did not formally enter the conflict until the resumption of unlimited German submarine attacks on American shipping in the spring of 1917.

The entry of the United States into the fighting in Europe momentarily slowed the longstanding national campaign to win women’s right to vote. Many feminists shelved their activism between 1917 and 1919 to support various relief and war industry efforts.

The scope of women’s service to the nation during World War I foreshadowed their involvement in World War II. For example, they served overseas as nurses, humanitarian relief workers, physicians, telephone operators, linguists, ambulance drivers, entertainers and Soldier support workers of all sorts.

American women also participated in a wide variety of homefront activities such as munitions production and other defense industry work, performing non-traditional jobs usually handled by men, including raising funds through liberty loan drives and leading the effort to produce and conserve food needed by Soldiers overseas.

The mainstream suffragists’ decision to focus on the nation’s needs during this time of crisis proved to help their cause. Their activities in support of the war helped convince many Americans, including President Woodrow Wilson, that all of the country’s female citizens deserved the right to vote.

The political cartoon featured in this article, by William C. Morris for The Brooklyn Magazine, published on Nov. 10, 1917, makes a clear connection between American women’s wartime service and woman’s suffrage.

Less than three years later, on Aug. 26, 1920, U.S. Secretary of State Bainbridge Colby signed into law the 19th Amendment to the Constitution, stating “the right of citizens of the United States to vote shall not be denied or abridged by the United States or by any State on account of sex.”

The willingness of the majority of suffragists a century ago to temporarily set aside their personal quest for the vote in order to back the United States in its first major overseas war proved to be a deciding factor in helping them to attain that long-sought goal.