Hurley’s PGA Tour Win is a Win for Military Community 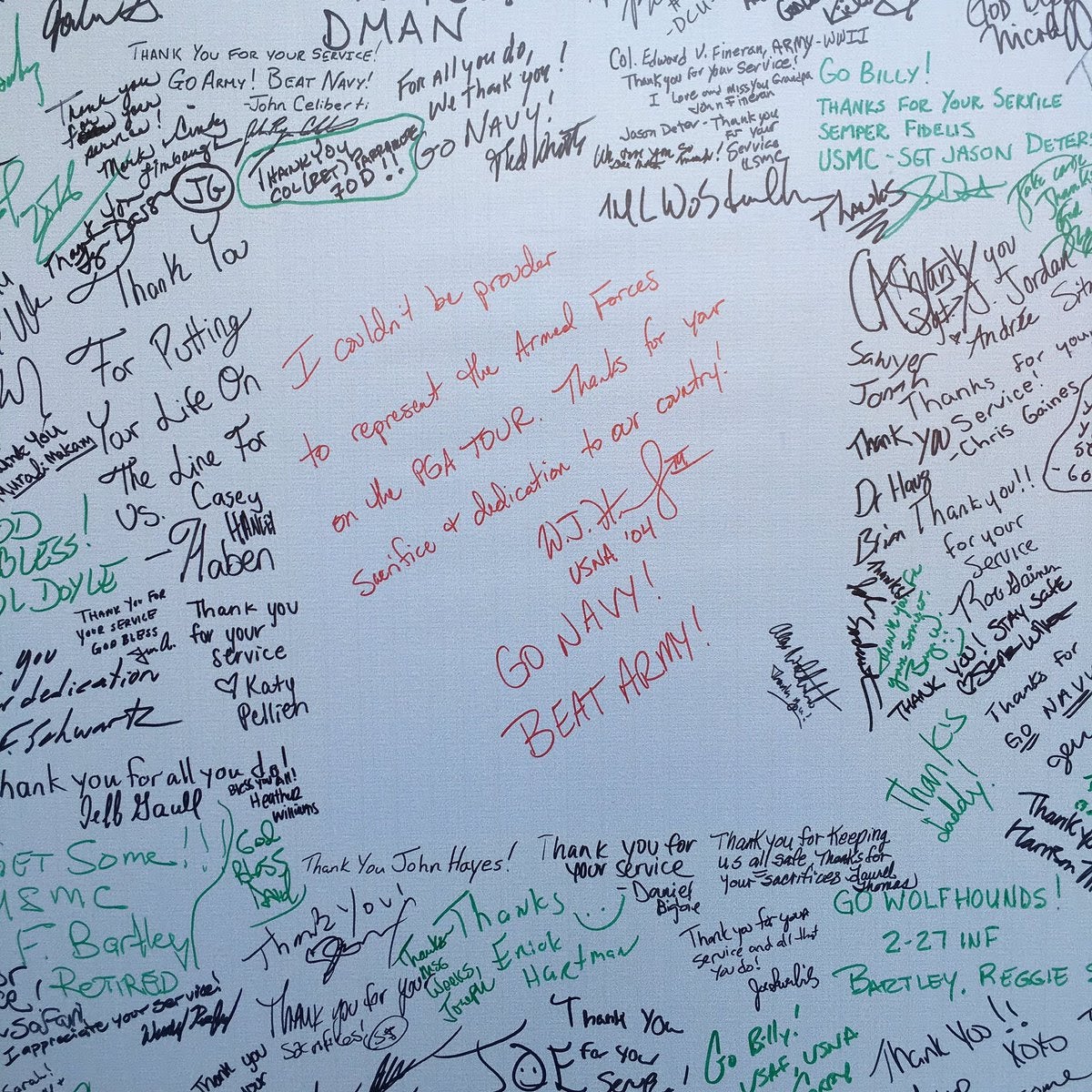 Immediately following Billy Hurley III’s  first PGA Tour win at the Quicken Loans National on June 26, 2016, he was ushered over to sign the We Salute Our Heroes wall, provided by the Tiger Woods Foundation, a tradition for the winner of the tournament each year. However, this year was different: Hurley currently is the only US Navy veteran on the PGA tour.

Hurley, with two US Navy sailors standing at attention on either side of him, did not just sign the wall but took time to write a personal message to his fellow veterans and the military community stationed around the world. “I couldn’t be prouder to represent the Armed Forces on the PGA Tour.  Thanks for your service and dedication to our country!  W.J. Hurley III, USNA ‘04  GO NAVY! BEAT ARMY!

Hurley served in the United States Navy from 2004 – 2009, following graduation from the United States Naval Academy with a degree in Quantitative Economics.  During his service,  he was stationed in Annapolis, MD, Mayport, FL, and Pearl Harbor, HI, which includes his time aboard the USS Chung-Hoon.

From 2006 through 2009, Hurley largely did not touch his golf clubs; however, he returned to competitive golf after completing his service commitment in late 2009. The journey to serve one’s country does not end when one leaves the service, as Billy Hurley III has demonstrated for the past 7 years since finishing his commitment to the US Navy.

Hurley has worked tirelessly to earn his way onto the PGA Tour, but his commitment to his fellow veterans and the military community never wavered.

“With everything he had going on in his personal life over this past year and focusing on the PGA Tour, he still felt strongly about making sure he continued to give back to the community he served with,” said Jennifer Pilcher, founder of MilitaryOneClick.

The Hurleys have long supported the military community through the SEAL Legacy Foundation, Operation Shower, Birdies for the Brave, and others.

But he still wanted to do more.

Over the past year, Billy Hurley III and his wife Heather met with MilitaryOneClick founder, Jennifer Pilcher and Executive Director, Corby Lawrence, to discuss ways the Hurleys can be even more connected to the community they love so much.  In his hometown of Annapolis , MD having breakfast in local coffee shops on West Street, they spent many mornings discussing his journey and how strongly he feels about connecting directly with the military and veteran communities.

One of the ways Hurley started to connect with the global military community is through his Twitter account.  Soon after his PGA Tour win on Sunday, fellow Naval Academy grads such as Mitch Harris of the St. Louis Cardinals, Joe Cardona of the New England Patriots, Joseph Greenspan of the Colorado Rapids, and others began to join in on the conversation.

According to Hurley, “Being able to connect directly with other military communities stationed around the world and with other academy graduates, like Mitch, is a camaraderie that just can’t be summed up in a tweet– but it’s just there… we are always there for each other.”

Hurley also started spending more time with active duty service members, their families, and veterans at the military tents at other PGA Tour stops around the country. On Thursday June 23, 2016, following his first round of the tournament, Hurley made sure he took time to visit the Lockheed Martin Military Pavilion and spent time talking with the military families.  He also stopped by the Quicken Loans Shot for the Heroes to help raise more money for charities.

“Meeting and talking with service members, fellow veterans, military families, and patriots gives Billy that extra drive…he draws positive energy from them as much as they are drawing pride in service from him,” according to Corby Lawrence, Executive Director of MilitaryOneClick and Air Force veteran.

The win for Hurley yesterday was also a win for the military community.   The course was filled with military-connected fans and patriots cheering, “Hurley! Hurley! Hurley!” “We are a proud sponsor and extremely humbled having Billy support our mission at MilitaryOneClick.com.  He exemplifies the best this country offers and we are so excited to continue this journey with him and his family,” said Pilcher.

For the Hurley’s, family has always come first, whether it is their military family or their real family.
Today, Billy shared with MilitaryOneClick that he will be attending his sister’s wedding in Virginia instead of the British Open.
Billy simply said, “I wouldn’t miss it for the world.”

Our mission at MilitaryOneClick is to enhance the lives of military members, veterans, their families and friends of the military community in just one click.

MilitaryOneClick is the premier virtual resource for military families. Our dynamic, user-friendly website provides the community with direct access to thousands of valuable resources including career tools, hiring fairs, educational scholarships, PTSD help, health insurance, moving, buying or renting a home, financial assistance, and more! The site is free, open to everyone and does not require users to register or login.