You may recognize him – a lone sailor, bundled in his button-down coat, a sea bag by his side, gazing... 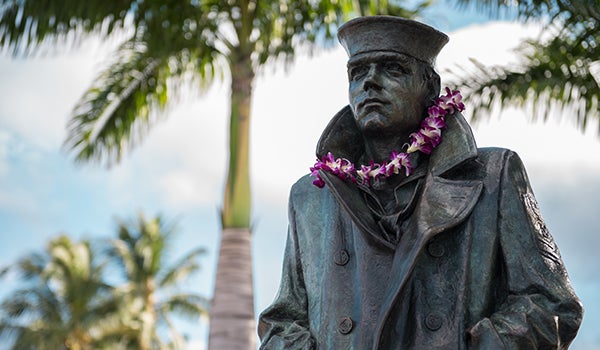 You may recognize him – a lone sailor, bundled in his button-down coat, a sea bag by his side, gazing into the distance.

The bronze statue of the Lone Sailor is an iconic symbol of the U.S. Navy, meant to honor, recognize and celebrate the men and women of the sea services. The original statue can be found in Washington, D.C., and several other Navy memorials across the U.S.

The new Lone Sailor statue was dedicated after the Navy’s 242nd birthday celebration Oct. 13 at the WWII Valor in the Pacific National Monument Visitor Center. The center is the entrance to the USS Arizona Memorial – a fitting location, since it’s the final resting place of 945 men who were never able to escape the burning, sinking ship on Dec. 7, 1941.

“Now the Lone Sailor statue will look out over Pearl Harbor, standing watch, seeing the USS Arizona Memorial … listening to the many voices and many languages of international visitors, and remembering 75 years ago as our military fought to shape our nation and our world,” wrote Navy Rear Adm. Brian Fort, commander of Navy Region Hawaii and Naval Surface Group Middle Pacific, in an op-ed prior to the ceremony.

The statue is also a physical tribute to those fallen men, as its base contains steel from the Arizona.

“This statue is a reflection of the pivotal role Navy sailors have played in our nation’s history … the personification of our Navy core values of honor, courage and commitment,” said Navy Adm. Harry Harris, head of U.S. Pacific Command.

The statue was dedicated in the Hawaiian tradition of ceremonially untying a Mai’li Lei, followed by the blessing of a Hawaiian Kahu (minister). The Mai’li Lei is a Hawaiian version of a ribbon cutting. The leis were then hung on the statue.

The original Lone Sailor statue was dedicated at the Navy Memorial in Washington in 1987. It was sculpted by Stanley Bleifeld.