Growing up in Gardena, California, now-Marine Corps Cpl. Leighton Anderson recalled that as a boy his Navy father would take... 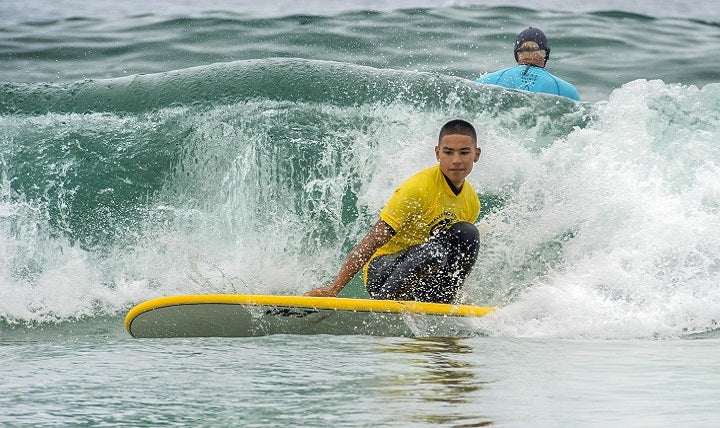 Growing up in Gardena, California, now-Marine Corps Cpl. Leighton Anderson recalled that as a boy his Navy father would take him to military airshows.

At that time, Anderson said he wanted to be a fighter pilot.

“I [later] realized I can’t do that because of my eyesight. But my dad took me over to [Marine Corps Air Station] Miramar, and I saw all of the aviation things and the people flying. I always wanted to be a part of the Blue Angels with their jets,” Anderson said.

Anderson didn’t get assigned with the Blue Angels maintenance and support team, but he did get become a crew chief with MV-22 tilt-rotor Osprey aircraft at Okinawa, Japan.

As an Osprey crew chief, Anderson said he inspected the aircraft, repaired the engines and replaced worn parts.

“While we’re flying, we back up the pilots. We load cargo and passengers as well,” he said.

In December 2016, after serving four years on Osprey aircraft, Anderson was severely injured in an Osprey crash during a training mission.

Anderson said he received a concussion, and injured his jaw and one of his eyes. He said he was required to wear an eye patch over the injured eye, which required stitches.

“I broke some ribs and collapsed my left lung,” Anderson continued. “I bruised my heart and fractured my right scapula.”

Today, Anderson is a patient at Naval Medical Center San Diego, where he’s learned how to surf as part of his recovery.

Anderson said he looked at the other recreation programs the Naval Medical Center San Diego’s Health and Wellness Department’s Wounded, Ill and Injured Wellness division offers, but the surfing clinic stood out to him the most.

“I’ve always wanted to learn how to surf since I’m from California,” he said. “I tried it three times in my life and never did it. And I was like, ‘Let me try it through the program here.’ And then after that, I was hooked. It was pretty sweet.”

Anderson said the surfing clinic has helped him physically and mentally.

“I had so many barriers because once I was injured I was like, ‘I don’t know if I can do that. I might hurt myself,’” he said. “I have a little bit of PTSD, and I didn’t think I would enjoy anything.”

Anderson added, “Once I tried it, I broke down a lot of barriers I had mentally and physically. I had weak tendons in my hand and my foot, but with surfing they’re starting to get better. And mentally, it makes me happy. I love it. Everybody’s really supportive. It’s just something everybody should take on.”