Capt. David Simon, an elite bobsled athlete, is a stellar example of resiliency and upholding the four pillars of Comprehensive... 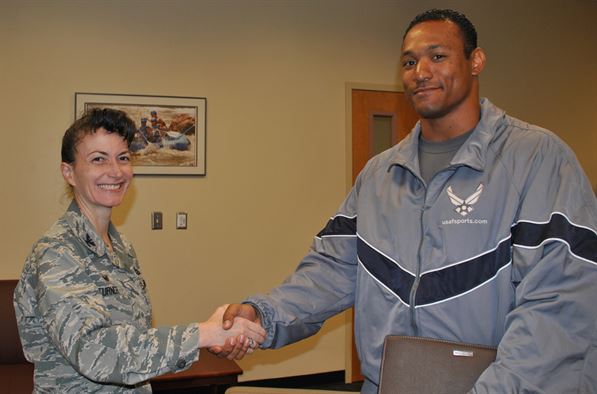 Mental: Nothing stops Simon. Not injuries, not being dropped from the Air Force World Class Athlete Program. “With resiliency, you keep pressing forward until you go to the next thing,” he said.

Physical: Bobsled is a demanding sport. “Everybody on the team can run 60 meters in under 7 seconds. Everybody is squatting 400-plus pounds. You’re not just fast, but you have to be pretty strong and explosive. You’re an interesting hybrid of an athlete,” Simon said.

Social: The support of family, friends and fellow Air Force athletes helps fuel Simon’s drive and motivation. “My family have made sacrifices in terms of my time away to train and compete and remained very supportive,” Simon said. He also has forged bonds with other elite Air Force athletes and members of the bobsled team.

Spiritual: Simon encourages all Airmen to always be ready and resilient, and he draws on faith to keep him strong. “Stay positive and have faith that God knows best, even if it doesn’t feel like it at that moment. He has you exactly where he wants you, and it might be that’s where he can get the very best out of you!”

Simon’s path to sliding down an icy track, which he describes as being stuffed in a trash can and being kicked down a hill, was the result of failing to qualify for a U.S. Air Forces in Europe and Air Forces Africa track-and-field event in 2015. He turned that experience into an opportunity to try a new sport.

“I was trying to become a better sprinter at my size. Typically, you’re not going to see a lot of guys 200-plus pounds sprinting. I was trying to find better and smarter ways to train. Bobsled came up, and I looked at the details. They had a combine (a test that includes sprints, broad jumps and tosses with a 16-pound shot), and pretty much everything took off from there,” said Simon, now assigned to the 16th Space Control Squadron at Peterson Air Force Base, Colorado, as a crew commander.

As an Air Force World Class Athlete Program member last fall, Simon tried for a spot on the USA Bobsled team. Unfortunately, an injury led to his release from the program.

However, in his typical fashion, he bounced back and, with faith and resiliency, is fired up to try again, aiming for the 2018 Winter Olympic Games in Pyeongchang, South Korea. Simon appreciates the honor of representing Air Force Sports, as part of the Air Force Services Activity.

“Just to know that you are representing the Air Force in such a program that still today provides me with a tremendous amount of support fuels me. To represent all Airmen, past, present and future, deployed and in garrison, and to those who paid the ultimate sacrifice, motivates me to continue to train hard and compete at such a high level,” he explained.

The U.S. Bobsled and Skeleton National Teams are reset before every season and athletes compete for spots every fall. Simon aims to be among them during the summer combine events, which begin in June.

“To make the Olympics and represent God, country and the Air Force would be such an honor and privilege. to make the Games next year would also have another special meaning to me as I am half Korean (maternal) and half African-American (paternal); a product of the U.S. military,” Simon said.

Competition for the team is tough.

“A lot of these guys I compete with are great athletes,” he said.

But most of them don’t have the Air Force advantage. Sgt. Shauna Rohbock, a USA Bobsled Skeleton coach and member of the Army’s WCAP for 17 years, said Simon is an exceptional team member.

“Captain Simon, being in the military, holds himself to a higher standard,” Rohbock said. “He’s more mature than most of the other athletes. He’s always going to be doing the right thing and making the right choices,” she said.

Being an Airman helps Simon overcome adversity, and being an athlete helps him be a better Airman.

“On duty or off duty, you’re going to have bumps in the road, and it’s how you respond to those bumps that make you a champion. With sports, you’re going to get hurt or maybe things don’t go your way or you don’t win this competition. It’s not so much the results; it’s how you react. Are you going to train harder? Are you going to work harder to get to your goals? That’s how athleticism can lead to being a better Airman,” he said.

“Just know that we are all wired to be greater than we were yesterday, it’s just a choice that only a few will take charge of and be a shining light for others to see and motivate. We are not just here to live life in mediocrity but to live out our lives as champions.”