Rosemarie Aquilina, the judge who presided over the trial of Larry Nassar, is a retired National Guardsman who invoked her... 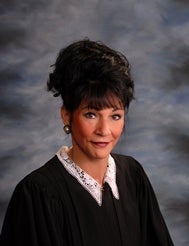 Rosemarie Aquilina, the judge who presided over the trial of Larry Nassar, is a retired National Guardsman who invoked her service during the sentencing of Nassar. Nassar was tried and convicted for the sexual abuse of more than 150 female athletes today, for a sentence of 175 years.

The trial has been a much-followed one because of the length of Nassar’s abuse, the national organizations that enabled his abuse, and the the household names who spoke out against the one-time lauded doctor. Among those who testified were Olympians Aly Raisman, Jordyn Wieber, and McKayla Maroney. But the trial also took a turn as Aquilina, the judge of the Ingham County Circuit Court, openly sparred with Nassar, allowing every victim to read a statement in court and refusing to allow the defendant to leave during those statements.

Aquilina fiercely protected the victims and their families, which some attribute to the large group of survivors who were willing to speak publicly in the courtroom. The judge–clearly disturbed by the crimes Nassar committed– was a vocal advocate for the women who could be there and those who could not.

After a statement by Bailey Lorencen, Aquilina said, “The military has not yet come up with fiber as strong as you. Mattel ought to make toys so that little girls can look at you and say, ‘I want to be her’. . . ”

Aquilina, a naturalized US citizen, joined Michigan’s Army National Guard in 1986 and was subsequently the first female Judge Advocate General (JAG) officer. She served for 20 years, retiring in 2006 from the JAG Corps. Her biography from Ingham County notes that “she became one of the most requested JAG Officers because of her dedication to service and the soldiers she served with.” Her nickname in the military, “Barracuda Aquilina,” seemed fitting as Aquilina spoke for more than 30 minutes, eviscerating Nassar’s action and his attitude during the courtroom proceedings.

During the Nassar’s sentencing today, Aquilina spoke briefly about her service:

“I was raised on old-country values. And my grandmother always told me and my parents always told me… that America is the greatest country. I believe that. That’s why I served in the military.”